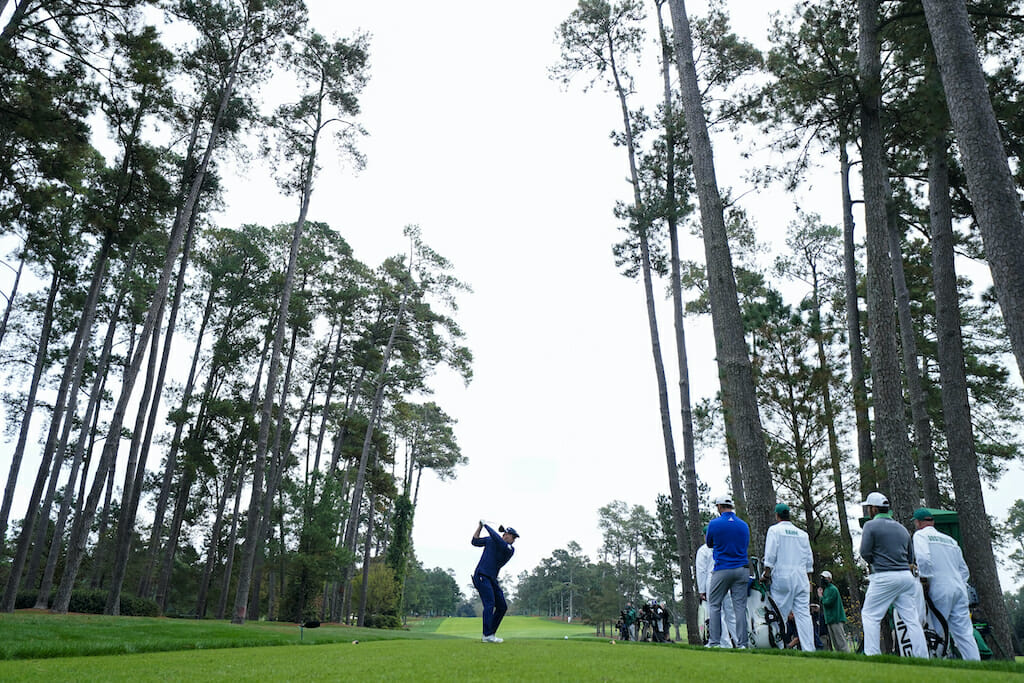 Bryson DeChambeau plays his stroke from the No. 17 tee during a continuation of Round 2 of the Masters at Augusta National Golf Club, Saturday, November 14, 2020.

In clearly a shock revelation, Bryson DeChambeau disclosed he went for a COVID test after feeling weird and a little dizzy. The reigning U.S. Open winner backed-up a first round 70 with an ultra-adventurous second round 74 to be assured of playing all four rounds at Augusta National.

DeChambeau’s second round was a mix of seven birdies, six bogeys and a third hole triple-bogey where he bizarrely lost a ball in just the first cut. However he took everyone by surprise with a simple ‘how do you feel about your play through the first 36 holes’ post second round interview.

“I’m not good, to say the least. I was feeling something a little weird last ‑‑ two nights ago, and I came out yesterday and was fine for the most part,” he said. “As I kept going through the round, I started getting a little dizzy. I don’t know what was going on, a little something weird.

“So I got checked for COVID last night (FRD), and I was fine, nothing. But I had to do the right thing and make sure there was nothing more serious than that. I don’t know what it is or what happened, but these past couple days, I’ve felt really, really odd and just not a hundred percent. Some of that’s played into it. I just feel kind of dull and numb out there, just not fully aware of everything, and making some silly, silly mistakes for sure.”

The 27-year old’s revelation may not come as a surprise given the work he has been undertaking to turn himself into the Hulk Hogan of golf but it’s clearly shaken the also outspoken and confidently-speaking World No. 6. Thankfully, DeChambeau tested negative.

“It was negative, yes. I had to do my due diligence. I made sure everybody on my team was negative as well, and they confirmed that,” he said. “So it wasn’t that. It’s no respiratory anything. It was about just feeling dizzy, and I’ve got a pain in my stomach, so I don’t know. Just some weird stuff going on”.

And while shaken by how was feeling out on the course, DeChambeau was also visibly shaken in losing a ball off the tee at the third hole before returning to the tee to post an eventual triple-bogey ‘7’ but then to be handed his original ball he lost in stepping onto the fourth tee.

“I mean, definitely throws you for a loop when the guy goes and gives you the ball on the 4th tee box and says ‘Oh, I found it’,” said DeChambeau. “You know, I struggle whenever we know it’s in that area and it’s all wet and it’s a plugged lie, guaranteed.  And they don’t give you ‑‑ they have to say it’s within a couple foot area.

“I’m like, well, I know it’s in this area that’s plugged, so I would think I would get some relief, but clearly not.  The three minutes was up, so I took a penalty and went back to the tee box and proceeded to hit in the same spot and had a really bad lie after that. So it just seems like there’s a lot of things going not in the right way.  I’ve certainly played worse golf than this and won golf tournaments.  So, you know, it’s one of those things where it’s golf.  You can’t control everything as much as you try.”