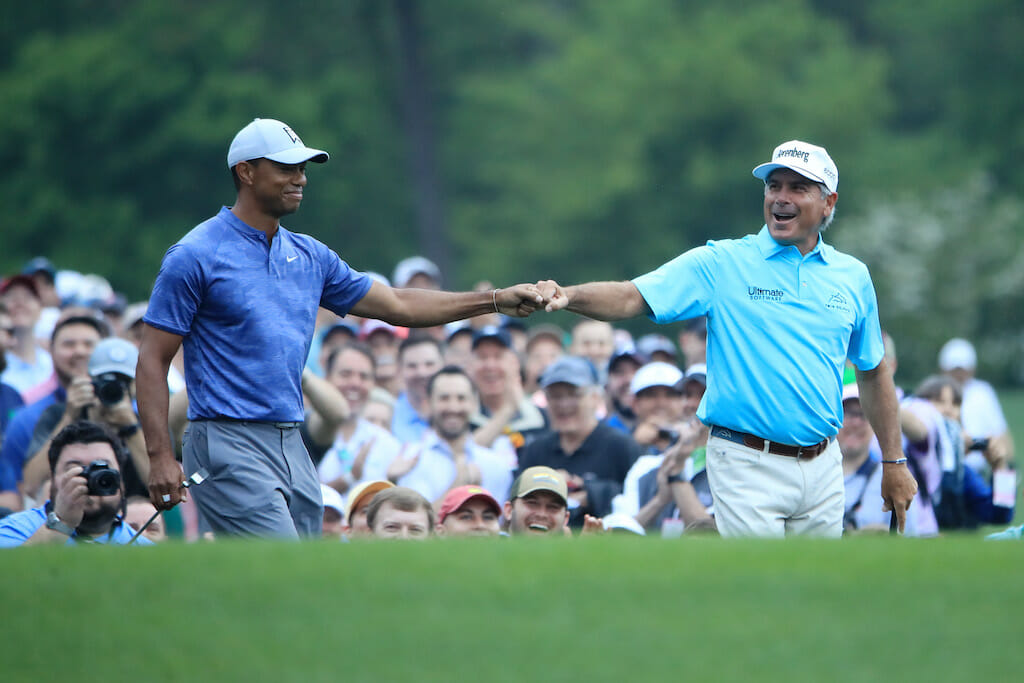 Tiger Woods will warm-up for the defence of his Masters title playing a Monday practice round with two of his closest golfing mates – Fred ‘Boom Boom’ Couples and Justin ‘JT’ Thomas.

The five-time Masters winning Woods will be teeing-up in a 23rd Masters since making his debut as a 20-year old in 1995. And while has had just one victory (2019 Zozo Championship) since the emotional scenes of April last year, Couples is not about to write off Woods matching Jack Nicklaus in being fitted on 15th November with a sixth Augusta National member’s green jacket.

“Well, I talk to Tiger every day. We’re playing Monday. I’ve got to get there and get tested, somehow get my test back fast so I can join he and JT, Thomas,” said Couples who was speaking during last week’s Charles Schwab Cup on the Champions Tour where Fred eventually finished in a share of fifth.

“Tiger’s wound up his preparation. He’s sent a couple pictures of the course. He’s a funny guy. I think he’ll be just fine. He loves the place. He can play there at any given time, it just depends on really how he feels and I can relate to that, but whereas when I don’t feel well, I can still slap it around, but when you’re the greatest player to ever play, it kind of wears on you a little bit. But he’ll get used to it and if he’s feeling healthy. Tiger will still be one of the 10 or 15 guys to beat.”

Couples made his debut in 1983 and was fitted with his only Augusta National members green jacket in 1992 and will join Woods making his 36th appearance. And with just a few days to go until the much-awaited rescheduled Masters, Couples was asked if he felt if there were any similarities in a then 46-year old Nicklaus capturing the 1986 Masters and Woods winning last year at age 43.

“Of course, Jack was older, Tiger hadn’t won in a little while,” Couples said. “The similarities are that they’re going to go down as 1-2 or 2-1 of the best players to ever play, so they both won at an older age. I wouldn’t say Tiger was really old and Jack wasn’t old, either, but it was kind of a surprise.

“The similarities, it was probably just a little surprise. I was on the 18th hole, just finished my round, when Jack birdied nine back in ’86 and I never heard a roar like that.Then I missed the cut last year and I flew home in time to watch Tiger tee off and Koepka, Molinari, all those guys. It was very riveting golf for about five hours, so it was fun for me.”

With much talk about a loss of around three hours of daylight a day in November compared to April when the Masters is normally held, along with autumn conditions, Couples says he has been watching the weather forecast.  And it will be the weather that 62-time winning Couples says will assist in playing all four rounds after missing the cut last year.

“Well, my expectations are I’ve been watching the weather, it seems to be warm, which will help a little bit,” said Couples. “I’m there to make the cut. I didn’t make the cut last year and I played 13 and 15 on Thursday horrifically. Then the second round I shot 70 and if I wasn’t choking to make the cut, I probably could have shot 67 or 68.

“But I kept looking, okay, I need to do this and do that. You can’t do that. But this year it’s definitely the goal is to make the cut. I think I’m playing well enough to go there. It’s so long and so tough for four days to play every hole well that my days of really, really competing there are to make the cut. Sad to say, but it is what it is.”