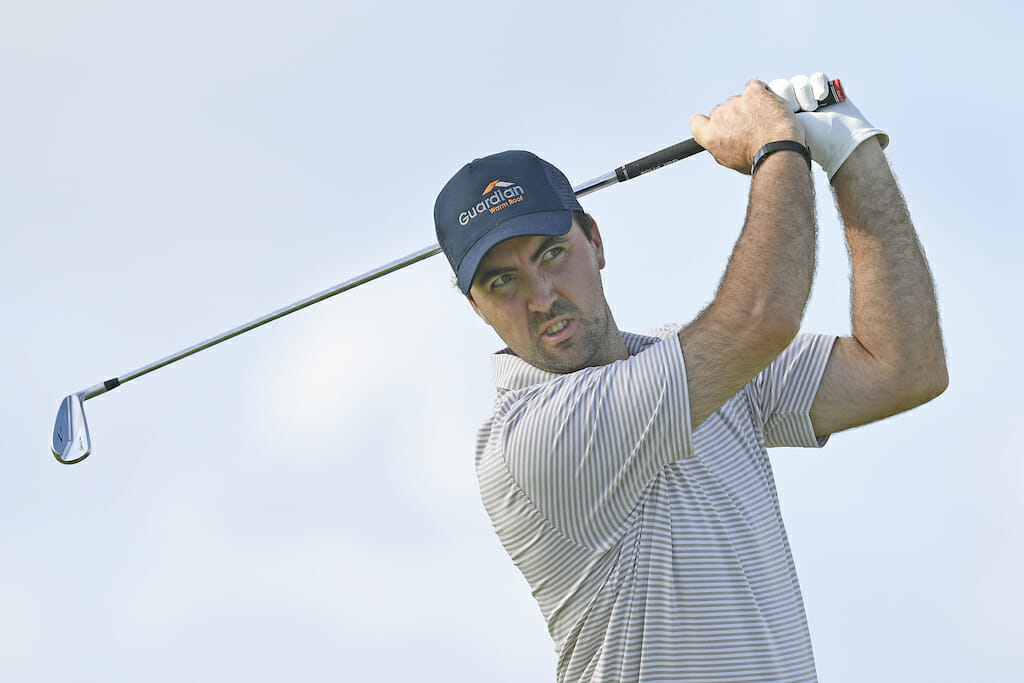 Niall Kearney and Michael Hoey will take plenty of positives away after both players turned in encouraging performances at the Andalucía Challenge de España.

Royal Dublin professional Kearney carded an even par round of 72 but would’ve been disappointed with two late bogeys after getting to two-under par on the day through 14 holes. Kearney’s two-under par four round tally saw him finish in a share of 22nd, earning him a cheque worth €1,965 for a welcomed week’s work.

Hoey meanwhile enjoyed his second under par round of the week after carding a magnificent seven birdies in a four-under par round of 68. The 41-year old had opened his tournament bid with a 67 but will be left to rue a second round 80 after finishing the week in a share of 31st at even par.

At the top of the board, Ondrej Lieser wrote his name into golfing history by becoming the first golfer from the Czech Republic to win on the European Challenge Tour with victory in Andalucía.

The 29-year-old posted a closing five under par round of 67 to reach ten under par at Iberostar Real Club de Golf Novo Sancti Petri, two strokes clear of England’s Richard Mansell in second place on eight under par, with fellow Englishman Matt Ford and home favourite Pedro Oriol a shot further back on seven under par in tied third place. Lieser earned entry into this week’s event courtesy of his first ever Challenge Tour top ten at the Italian Challenge Open Eneos Motor Oil and he was visibly emotional after securing a historic victory in Andalucía.

“It feels awesome,” he said.  “To be the first player from Czech Republic to win on the Challenge Tour, especially the way I did it, I was on fire, especially on holes seven, eight and nine. I went birdie-birdie-birdie there, I knew I was leading because I saw the leaderboard and I was just trying to make another birdie, another birdie, because the finish we have here; 16, 17, 18, you don’t even need to hit a bad shot and it’s an easy bogey.

“I was just so calm. I was really enjoying that moment. I think what really helped me was the Challenge Tour event in Italy where I was kind of knocking on the door and trying to put myself in contention. That put me where I needed to be and I was trying to play the same strategy, the same course management as the first three days, which was just hit it hard, find it and hit it again, and it worked out.”

The Prague native previously plied his trade on the Pro Golf Tour and he credits the circuit in preparing him for the step up to the Challenge Tour.

“If you look at the three players now who came from the Pro Golf Tour; Sami Välimäki last year, who won on the European Tour right away, Hurly Long, winning in Italy, and now me winning here,” he said. It shows how well this satellite tour prepares you to play well at a higher level. When I saw these guys winning on the European Tour and Challenge Tour, I thought ‘you can do it as well.’

“I have three highlights of my life. The first is the birth of my baby girl almost 18 months ago, the second would be the wedding with my wife, and now this is going in the third spot. This is what it means to me and my family. They are the only reason I am doing this. I’m just playing golf and trying my best, just to be good enough to take care of them.”

Mansell closed the gap to Marcel Schneider at the top of the Road to Mallorca Rankings to less than 4,000 points with his second runner-up finish of the season, while Ford continued his good run of form with his tie for third following his play-off defeat to Hurly Long in Italy. Spanish amateur Eduard Rousaud, who played in The 2018 Junior Ryder Cup, carded the lowest round of the day, a six under par round of 66, to secure a tie for fifth place on six under par alongside Sweden’s Henric Sturehed, Finland’s Oliver Lindell and Denmark’s Martin Simonsen.

France’s Julien Brun and Swede Christofer Blomstrand complete the top ten by securing a tie for ninth place on five under par, with Brun birdieing the 72nd hole to earn a top ten entry into next week’s event. With victory in Spain, Lieser moves to sixth place on the Road to Mallorca Rankings with 54,344 points and secures his spot in the season-ending Challenge Tour Grand Final. The Challenge Tour remains at Iberostar Real Club de Golf Novo Sancti Petri next week for the Andalucía Challenge de Cadiz, which will take place from Wednesday November 11 – Saturday November 14.