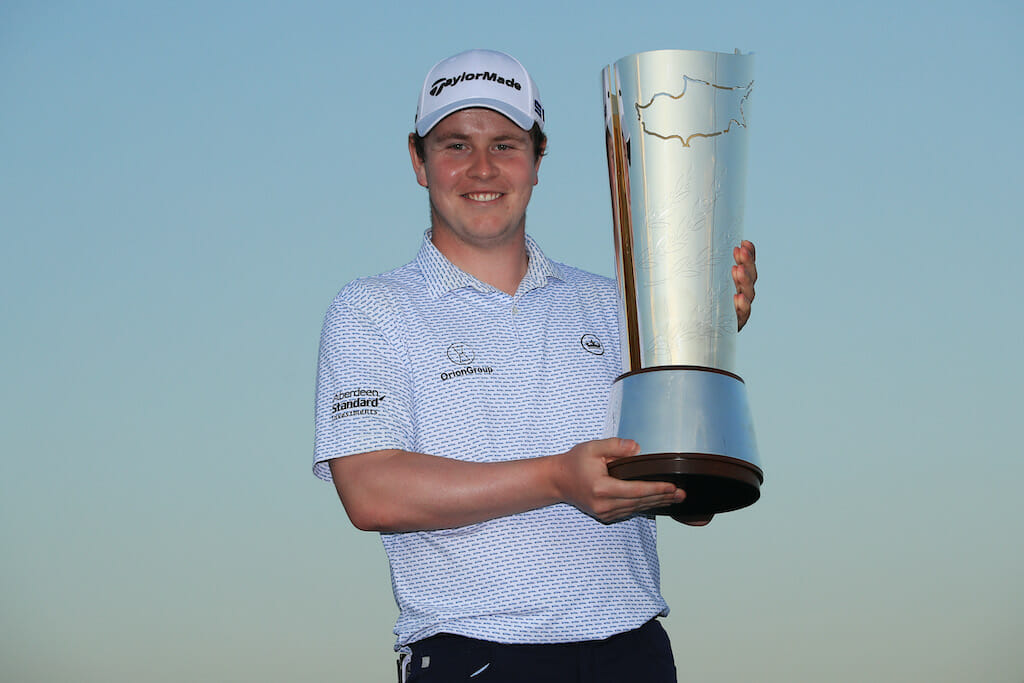 Robert MacIntyre claimed an emotional maiden European Tour title at the Aphrodite Hills Cyprus Showdown, where a seven under final round 64 earned the Scot a one-stroke victory in a thrilling shoot-out finale.

The 24-year-old carded eight birdies in the final showdown of the exciting new format, in which the 19 players who had progressed to the final round began the day from a clean slate in a sprint to the finish – with the lowest round of the day sealing victory. It was a closely-fought contest until the final furlong but MacIntyre, who won last year’s Sir Henry Cotton Rookie of the Year Award with an 11th place finish in the Race to Dubai Rankings presented by Rolex, almost holed a remarkable ace at the par three 17th before tapping in for birdie to take a share of the lead.

A fearless drive down the par five 18th presented a golden opportunity to seal victory outright and so it transpired as a perfect second shot and a facile two-putt earned him his first title, elevating him from 57th to 24th in the Race to Dubai Rankings presented by Rolex and copper-fastening his path to the season-ending DP World Tour Championship, Dubai – the fourth and final Rolex Series event of the campaign.

“This is what I’ve been working for,” said MacIntrye. “It’s been a difficult few months for me, only my family know what’s going on. I can’t believe it. My game is there, tee to green I’ve been absolutely brilliant the last two weeks. The putter has been cold, stone cold.

“When the rain delay came in there, I said to my caddie Mike, it’s time to show up. I hit a great iron shot into 15 and there it was. It turned up right at the right time. Mike did brilliantly too there. It’s what I’ve dreamed of since being a wee kid watching Scottish Opens at Loch Lomond. To finally play on tour, and I gave myself a lot of chances last year, and this week’s format suited me and I took it. When that storm came in, I had good momentum, had just birdied 13. Then I missed a putt on 14 but the seven-iron into 15 and the iron shot into 17 – we just played left into it, I pulled it slightly but it was a perfect number and I just missed the hole. The 17th hole was huge, when I saw the scores.

“I’ve done a lot of work in the last six months, not thinking about winning a golf tournament, just to play my golf. Last year, I was talking and thinking about winning golf tournaments when I was going down the back nine on a Sunday, but this year I’ve just tried to take my time and let it happen. What will happen will happen and it’s happened today.”

Japan’s Masahiro Kawamura earned the best European Tour finish of his career, finishing runner-up on six under, while Spain’s Jorge Campillo finished in outright third sport on five under. Clandeboye’s Jonathan Caldwell could only manage a one-over par round of 72 in the shootout but banked €15,250 for qualifying for the Sunday decider.