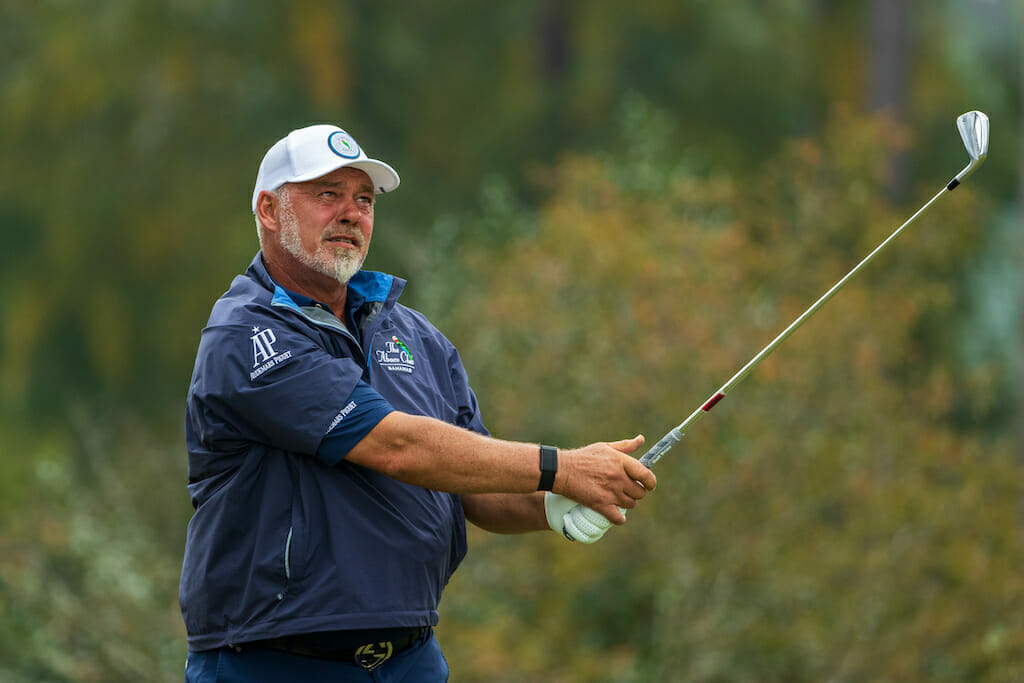 Darren Clarke will look to etch his name on a tour trophy for the first time since adding his title to the famed Claret Jug at the 2011 Open Championship.

The Dungannon favourite birdied four of his last five holes and is one of three co-leaders after a second-round 66 at the SAS Championship.

It marks just the second time this season he has opened with consecutive rounds in the 60s (T9/Charles Schwab Series at Bass Pro Shops Big Cedar Lodge). It’s also the first time Clarke has led/co-led after any round on the Champions Tour.

Clarke will play in Sunday’s final group for the second time this season. He was T3 after a second-round 62 at the Sanford International, and he went on to finish T12 after a final-round 70.

The former European Ryder Cup Captain is looking for his first win since the 2011 Open Championship. A win on Sunday would be his first in 126 professional starts (40 PGA Tour, 37 PGA Tour Champions, 49 European Tour; WGCs and Majors are counted as PGA Tour starts only) and break a winless streak of 9 years, 2 months, 24 days.

However, getting over the line will be no easy task given the company he finds himself in on a packed leaderboard in North Carolina.

Unlike Clarke, Sunday will be the 10th time Colin Montgomerie starts the final round as a leader/co-leader, and first since the 2018 Mitsubishi Electric Classic. He is 4-for-9 in converting those leads/co-leads into victories.

At the 2017 SAS Championship, Montgomerie was part of a three-way tie for the lead at 8-under through 36 holes. He closed with an 8-under 64 and won by three.

Montgomerie has seven wins on PGA TOUR Champions, the most recent being a playoff victory over Bernhard Langer at the 2019 Invesco QQQ Championship. That was also the last time Montgomerie played in Sunday’s final group.

American Woody Austin is also right there at nine-under par while the list of those a shot further back is a who’s who of professional golf with Bernhard Langer, Vijay Singh and David Toms poised at minus-eight ahead of what should be a fascinating final round on the over-50’s circuit.