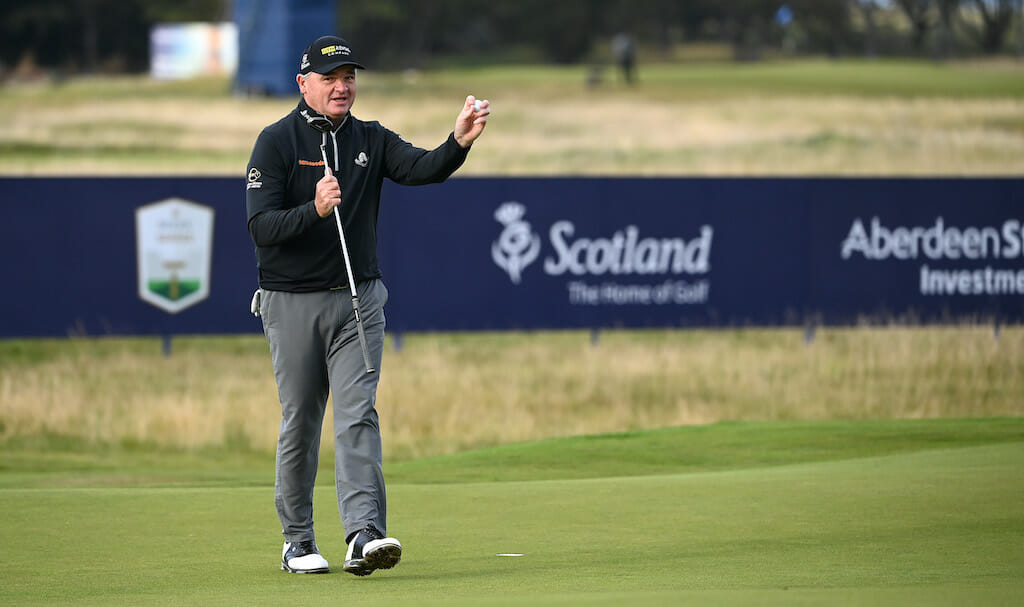 Paul Lawrie ended a 620 European Tour event career clearly suffering with back pain that has dogged his career over the past few years to post a 79 for a 10-over tally on day two of the ASI Scottish Open on the Renaissance course to the east of Edinburgh.

Lawrie, 51 had been seen arriving at the course whistling and was filmed also walking down the 18th still whistling and heard remarking: “All will be okay if Aberdeen beats St. Mirren tonight!”

He walked from the final green with a handful gathered at the back of the 18th to applaud Lawrie on the occasion of his 620th and last European Tour event.

“When I turned pro I never thought I would be playing any European Tour events, never mind 620,” said Lawrie.

“So, it’s lovely but days like today tell me that I’ve done the right thing as my back was really, really sore so it’s perfect timing to leave and I’ve now got the winter to get my back sorted out and get back to some fitness.

“I just played very poorly out there today and had woken-up this morning with my back sore and we get to a certain age when that’s going to happen every now and then and you’re going to have days where it doesn’t matter how many pain-killers you have as my back is just sore.

“But, hey, it doesn’t matter because on a day like today it’s immaterial.  I’m just delighted I have been able to play such a long time as 620 events is a lot of golf tournaments, I feel though there’s others who have played more.”

620 – Appearances on the European Tour.

Paul Lawrie has marked the final appearance of his European Tour playing career during the 2020 Aberdeen Standard Investments Scottish Open, his 620th event.

After turning professional at the age of 17 in 1986 with a handicap of 5, Paul Lawrie made his debut at the 1992 Johnnie Walker Asian Classic. It was the first of 26 events he played that year in 1992, and the first of 620 in his career.

Famously starting the final round 10 shots behind, Lawrie triumphing in a play-off during the infamous Open Championship at Carnoustie in 1999, defeating both Justin Leonard and Jean Van de Velde. It remains the biggest final round comeback in history.

Lawrie’s Ryder Cup career saw him compete in two of the most famous. He made his debut during the 1999 contest at Brookline, and returned after a 13 year gap for the 2012 contest dubbed the ‘Miracle at Medinah’ – which included his own singles victory over Brandt Snedeker.