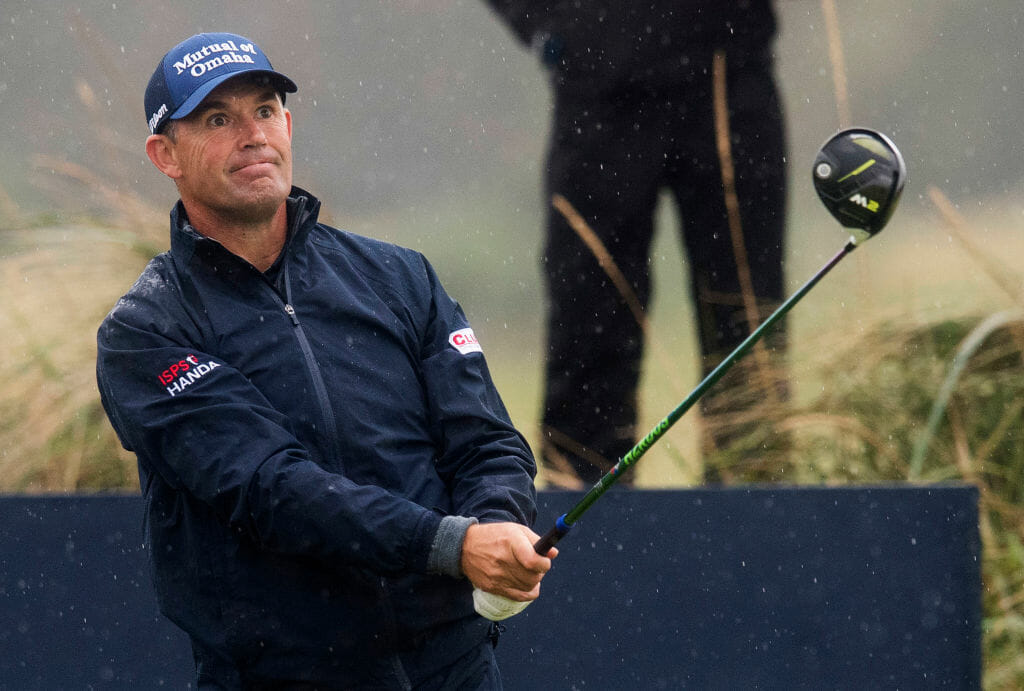 Padraig Harrington finds himself just six shots back of Robert Rock’s lead and four strokes behind second after returning a more than useful two-under par 69 on moving day at the ASI Scottish Open.

In sodden conditions, Harrington carded four birdies and two birdies to move to three-under par as much of the field struggled on day three at The Renaissance Club.

After making the cut on the number at minus-one yesterday, the Dubliner, in just his second Tour appearance in some six months, will now be hoping to post an early number on Sunday with the weather set to prove testing once more for the final day in North Berwick.

Meanwhile, Tommy Fleetwood will go in search of a third Rolex Series victory after also making the most of wet conditions at The Renaissance Club.

The 29-year-old carded a brilliant round of 69 to move up the leaderboard and will tee it up in final group tomorrow alongside leader Robert Rock, who has a two shot advantage at nine under par, and Australian Wade Ormsby.

“To be fair, there was a period early doors where it was fine. It was playable and I think as the rain got worse, obviously you get wetter and the day gets a bit longer, but when we sort of got to the edge of the golf course and the wind picked up, the rain, this is the worst it’s been all day.

“And 18, finishing with a birdie. I said on the fairway, again, stood over the ball and I was pretty prepared for any scenario after hitting that one. I could have duffed it or shanked it or done whatever and wouldn’t have been too surprised.

“Actually where it went, it was the most surprising thing. The putt from two feet out looked like it was going in. That one felt really, really good to finish the day, shoot two under out there, I just felt like I won today, like the battle against the golf course after that. It was a nice way to finish.”

Fleetwood is joined at seven-under par alongside Ryder Cup teammate Ian Poulter, who battled to a 73, Swede Marcus Kinhult (71) and Ormsby (70).

Spaniard Adri Arnaus, Frenchman Victor Dubuisson and Malaysia’s Gavin Green shared the lowest rounds of the day with a trio of 67s to sit at five under alongside England’s Andy Sullivan, who recorded a 69.

Home favourite Robert MacIntyre carded a 68 to sit in a group of 12 players at four under including fellow Scotsmen Grant Forrest and Marc Warren, and Rolex Series champions Brandon Stone and Lee Westwood.