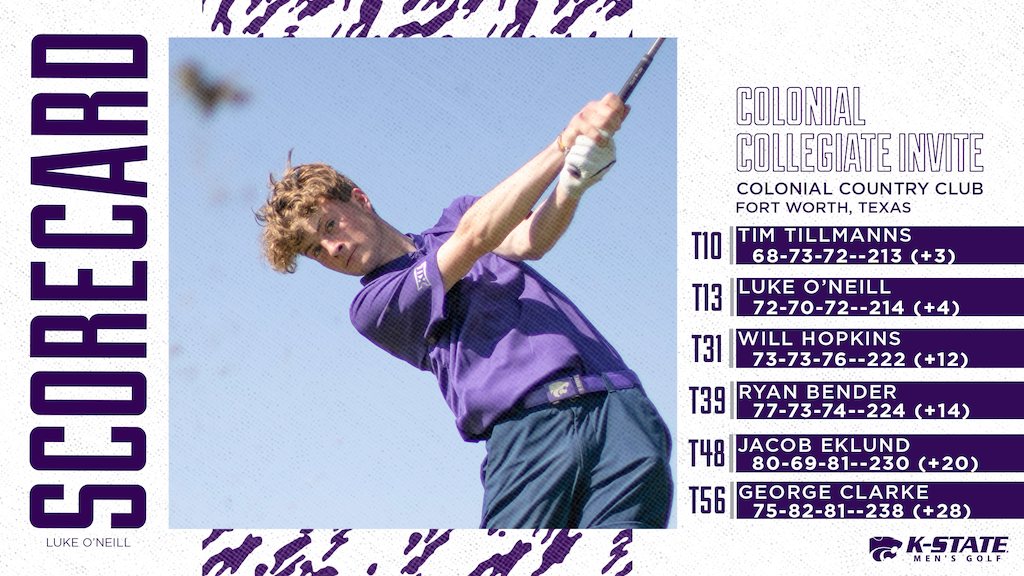 Two of K-State’s youngest players – sophomore Tim Tillmanns and freshman Luke O’Neill – posted top-15 finishes but the Wildcats were generally unable to solve tough course conditions while turning in their highest team tally and slipping three spots on the leaderboard to seventh at the Colonial Collegiate Invitational on Tuesday.

Tillmanns and O’Neill each turned in 2-over 72s on Tuesday, K-State’s top tallies over the final 18 holes, good enough for Tillmanns first career top-10 finish as he landed tied for 10th at 213 (+3) and a T13th placement for Connemara youngster O’Neill one stroke back at 214 (+4) for the event.

“It was a struggle today,” head coach Grant Robbins said. “The greens really firmed up as the day went on and made the course play extremely difficult.

Our guys showed a lot of grit this week, we just weren’t good enough tee to green. I did really like the fight I saw, especially in some of the younger guys.”

The Wildcats will enter this weekend’s Big 12 Match Play Championship as the No. 7 seed after previously being No. 10 entering the past two events.

K-State junior Will Hopkins’ 12-over par 222 put him in a tie for 31st, while redshirt sophomore Ryan Bender capitalised on back-to-back solid scoring days to finish in a tie for 39th at 14-over par 224. Graduate student Jacob Eklund finished 20-over par 230 and in a tie for 48th, while senior George Clarke ended 56th at 28-over par 238.

“It’s a great way to open the season as it gives us a gauge as to where we are at right now and what we need to do to get better,” Robbins said.

“We are looking forward to match play this weekend.”

K-State will travel nearly 260 miles south to Houston to get ready for the Big 12 Match Play Championship on Friday. Match-ups and tee times will be announced later in the week.