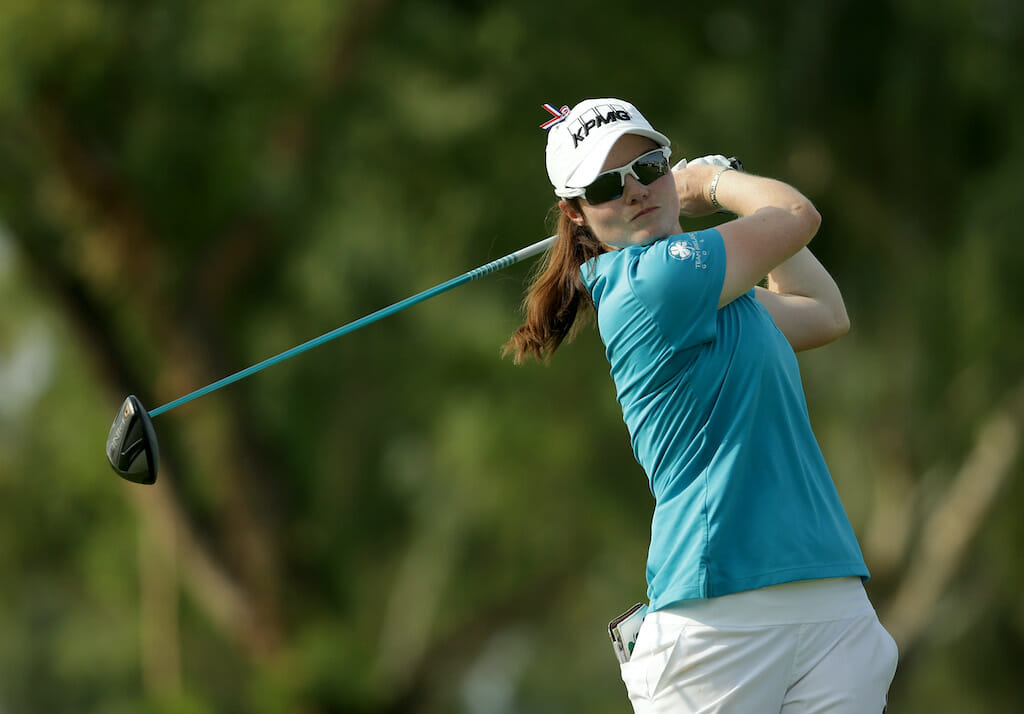 Leona Maguire kicked her Major championship into gear with a superb four-under par 68 on moving day at the ANA Inspiration in California.

Starting her third round at one-over par, the Cavan professional fired five birdies in a superb showing on Saturday with just one blemish on the card at the par-4 fourth.

Maguire found 12 of 14 fairways and needed just 27 putts and sits in a share of 28th ahead of the final round at three-under par for the tournament, albeit nine back of the leaders.

Stephanie Meadow trails her Ireland teammate by a shot after two bogeys in her closing five holes put the breaks on any moving day momentum.

The Jordanstown professional could only manage a one-over par 73 around Mission Hills and sits ten shots back of the leaders in a tie for 36th at minus-two.

Completing the Irish trio, amateur Olivia Mehaffey, who made her first professional Major cut on Friday in California, signed for a third round 77 for a nine-over par total.

The leaderboard at the ANA is absolutely packed with power names and inspiring stories heading into Sunday’s final round.

Young stars Brooke Henderson and Nelly Korda are tied for the lead at -12 with one round to go. Lexi Thompson, seemingly always in contention on the Dinah Shore Tournament Course, is tied for second at -10 with LPGA Tour veterans Katherine Kirk and Mirim Lee, both looking for the first major victory of their careers.

Henderson started the day six strokes off Korda’s lead but made a 15-foot eagle putt at the par-5 second to begin her charge. She added in six birdies and one bogey en route to a 7-under 65, her lowest ANA 18-hole round by two strokes.

“Being a major championship, you’ve really got to stay patient and know bogeys are going to happen,” said Henderson, a nine-time LPGA Tour winner. “The rough out there is very thick and you’re

just praying it’s sitting up if you hit it in there. You just have to go with what the course gives you and just expect bogeys and try to make a lot of birdies to counter them.”

Henderson has never missed the cut in her five previous ANA Inspiration appearances but only has one top-10 to her name, a tie for 10th in 2016.

After blitzing her way around the course on Thursday and Friday, Korda came back to Earth on Saturday. A bogey at No. 5 was her first scorecard blemish since her fourth hole in Thursday’s first

round. She then found the water at No. 6 en route to a double bogey, leaving the American phenom looking vulnerable and trailing for the first time since Thursday. But she bounced back with three birdies on the back nine for a 71 and put herself back into contention for her first major title.

“It was a disappointing front nine, but I was really proud of the way I fought on the back nine,” said Korda. “Never gave up and there’s still 18 more holes to be played, so much golf.”

Kirk, a 17-year LPGA Tour veteran, will join Henderson and Korda in Sunday’s final grouping. The Australian player, who has three career victories, returned an even-par 72 on Saturday and would absolutely relish the opportunity to make the famed leap into Poppie’s Pond come Sunday afternoon.

“I’ve played out here, I don’t know how many years now but certainly being a veteran, got a lot of good rounds here under my belt and good memories, and it’s going to be a nerve-wracking day,”

said Kirk, whose best finish in her 12 ANA Inspiration appearances in a tie for eighth in 2009. “But I’ve just got to go out there and try and execute as best I can and try and stick to what I’ve been doing because it’s been pretty solid so far.”

Thompson’s rollercoaster round of 2-under 70 included five birdies, two bogeys and one double bogey, while Lee carded four birdies and three bogeys in her 1-under 71. They will play in Sunday’s penultimate group alongside Carlota Ciganda, who shot up the leaderboard with a 5-under 67 on Saturday.