Meadow just four back after confident start at ANA 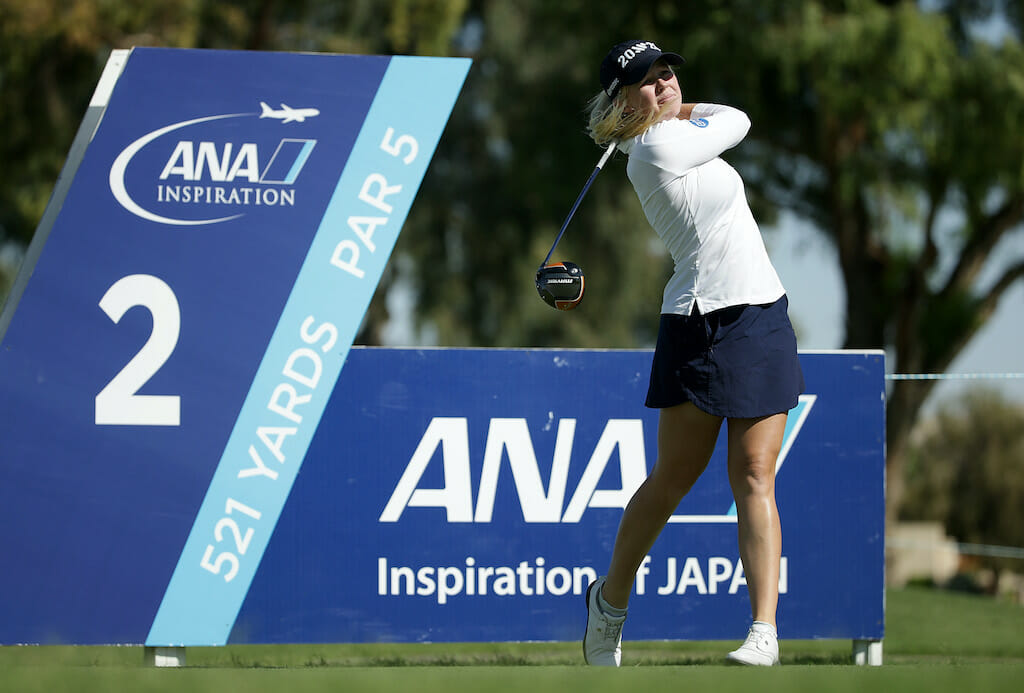 Jordanstown’s Stephanie Meadow fired a rock solid two-under par round of 70 to get her Major quest off to a great start at the ANA Inspiration.

Entering the second Major on the women’s calendar this year, the 27-year old had said her game was trending in the right direction and it continues to look that way after she carded four birdies and just two dropped shots around Mission Hills Country Club.

Just inside the top-20 and only trailing leader Nelly Korda’s lead by four heading into round two, Meadow found 7 of 14 fairways and just 10 of 18 greens but 27 putts made the difference in an accomplished opening effort.

Meanwhile, Leona Maguire returned a mixed bag one-over par round of 73 to open her account at Rancho Mirage in a share of 57th.

The Cavan professional showed plenty of promise with three birdies in her opening effort but four dropped shots undid any progress with Maguire currently just two shots better than the projected cut mark of plus three.

It was a bit of a scramble for the former world amateur number one who hit just 10 of 18 greens in reg but that gives Leona plenty to improve on ahead of this evening’s second round.

Royal County Down and Tandragee amateur, Olivia Mehaffey finds herself up against it after carding a five-over par first round 77 at Mission Hills.

Mehaffey had made the turn in even par and looked to be cruising before five bogeys in her closing seven holes flipped the picture for the Arizona State star.

At the top of board, Korda’s game was as hot as the weather on Thursday in the Coachella Valley. With temperatures soaring into the upper 90s Fahrenheit and expected to break 100 in the coming days, Korda carded a 6-under 66 on Thursday and holds a one-stroke lead over In Gee Chun and Madelene Sagstrom following the first round.

Korda made seven birdies and one bogey, bookending her round with birdies at holes 1 and 18.

“Obviously on No. 1, haven’t played for a week, first day of a major, your nerves are definitely there, so birdieing No. 1 was nice,” said Korda, who bested her previous ANA career-best round of 67 on Thursday.

“I would say the bunker shot on No. 11 was really nice, too. I love tap-in birdies.”

This is the first time that Korda has held the lead following any round at a major championship. Her best major finish is a tie for third at the 2019 KPMG Women’s PGA Championship, with an ANA Inspiration career-best tie for 13th in 2018.

Chun’s 67, which featured six birdies and one bogey, is her lowest career round at the ANA Inspiration, besting the 68 she shot in the first round in 2018. Sagstrom also shot an ANA-career best 67, with seven birdies offset by two bogeys. Chun is aiming for a third major title to join her wins at the 2015 U.S. Women’s Open and the 2016 Evian Championship, while Sagstrom is aiming for her second win of 2020, to go along with her trophy at the Gainbridge.