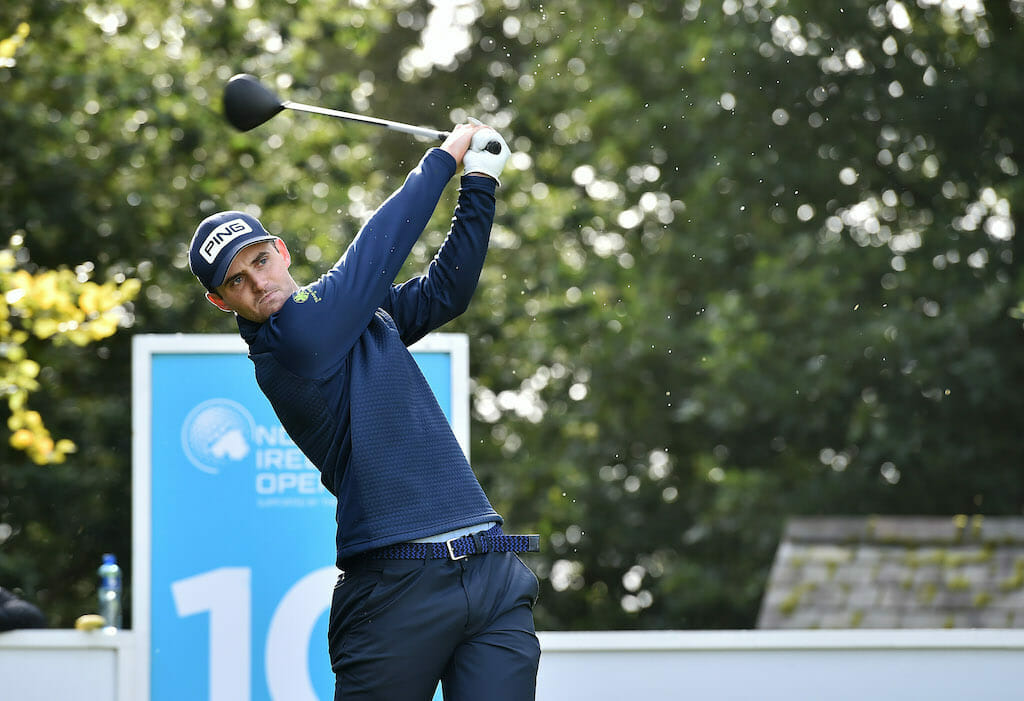 Conor O’Rourke spearheads the Irish challenge at the halfway stage of the Northern Ireland Open supported by The R&A at Galgorm Spa & Golf Resort where the course and conditions have proved testing over the opening two days.

O’Rourke carded a level par 70 in his second round to be in a tie for 19th on one-under heading into the weekend. The Naas professional is the only home player to dip under par but he is closely followed by local favourite JR Galbraith on level par after a pair of 70s. Niall Kearney is also around for the weekend after a 70 left the Royal Dublin pro on one-over.

“I played steady. Couple of birdies at the second and 12th and missed a good chance on 18 after two great shots onto the green but then three putted. All in all, probably a fair reflection,” was O’Rourke’s take on his round.

“It’s another good test out there today. Similar conditions to yesterday. The wind picks up and drops so quickly plus the rough is penal. If you are offline, you need a bit of luck to get any sort of shot at it. It’s a serious test.

“I’m looking forward to the weekend, try and throw off the shackles and have a crack at it.

“There’s not a huge amount to play in for the rest of the season, it’s almost week to week,” added O’Rourke. “I’ll focus on rest of this week and see if I can get anything off the back of it. Other than that, it will be EuroPro, Final Q-School in October. Quiet year. We are definitely not over-golfed that’s for sure.”

Galbraith needed a strong finish with two birdies in the last three holes to make the cut and is also ready to push on and see what the weekend holds for him.

“I was two over with three to play but managed to birdie 16 and 18, happy to finish well,” said the 26-year-old. “It was another tough day, breezy with some torrential showers. We got caught with a bad one on the 15th.

“The rough is so juicy you just have to keep it straight. If you’re offline at all you’re making bogey or worse. It was a pretty up and down day for me, seemed like I made birdie then gave it back on the next hole, one of those days,” added Galbraith, who mixed five birdies with as many bogeys.

“Anything can happen over the weekend around this course. I’ve done the hard part making it into the weekend, so I’ll just go and freewheel. I’m playing well, no reason why I can’t make a run at it. Nothing to lose.”

As for Tournament Ambassador Michael Hoey, he has the weekend off and was left to rue an untimely nine yesterday and maintains he is just not playing enough competitive golf. The 41-year-old signed for a level par 70 but the damage was done with yesterday’s opening 76.

“I was holding it together quite well yesterday, but just haven’t played enough. When I finished with a nine yesterday, that was game over. Today I got to two under then fell apart again towards the end. Just lack of golf for me,” was Hoey’s typically honest assessment.

“I haven’t really played any golf this year. It’s too hard a game. Little things like reading the line, club selection in the wind, pre-shot routine. Golf totally beats you up unless you are on top of it.

“I also found it hard caddying for myself. Feel it in the legs, physically it’s tough doing everything. Nothing for me now until June 2021,” added Hoey, still managing a joke. “I need to be playing, I can’t be practicing all day like these guys, I’m too old.”

With the cut falling at plus-three, only three of the 16 Irish players who started the week made it into the weekend. Amateur Tom McKibbin gave another good account of himself around Galgorm and was unlucky to miss out at four-over, while Galgorm Castle member Josh Hill was the second amateur in the field and finished 12-over.

Leading disability golfer Brendan Lawlor dropped back after a 79 left the Carton House professional on 13-over.

Italian Enrico Di Nitto added a 66 to his opening round of 68 to lead the field by one at six-under par.