Grant’s journey comes to an end at Women’s Amateur 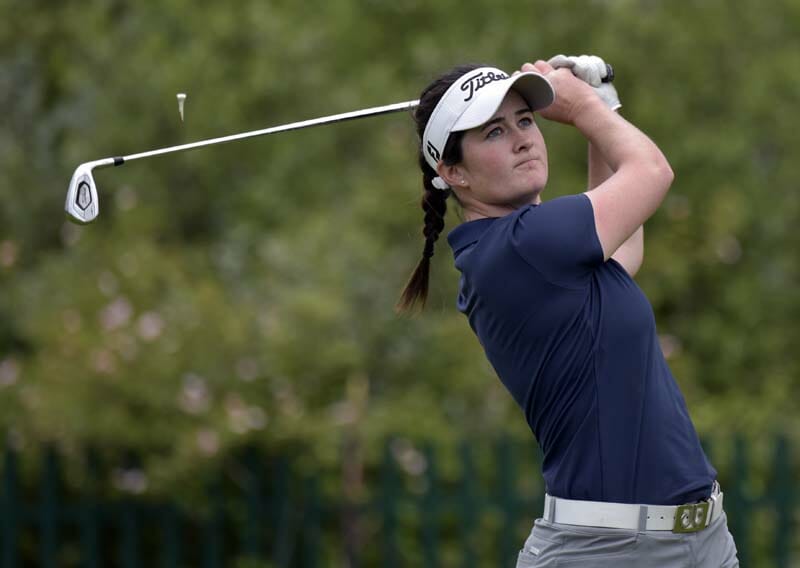 Paula Grant’s brilliant journey at The Women’s Amateur has come to an end after she was narrowly defeated by England’s Caitlin Whitehead in round three at West Lancashire.

The Lisburn golfer looked to have swung momentum her way when she birdied the par-3 17th to pull the match back to all square playing the last this morning.

Unfortunately, however, Grant made bogey at the closing hole and with Whitehead in for par, Ireland’s last hope in this year’s tournament bowed out before the quarter final stage.

Meanwhile, English duo Emily Toy and Annabell Fuller produced incredible finishes on a dramatic day at the 117th renewal to reach the semi-finals.

Toy, who only qualified on the cut mark from stroke play qualifying, built on her impressive victories on Thursday with two nail-biting successes after extra holes. In her morning last-16 tie with Chloe Goadby, Toy dug deep to win the 18th after Goadby found the water off the tee. The pair halved the 19th with birdies, before Toy delivered another to claim a memorable success at the 20th.

“You just have to keep going as a golfer, once you are out there, you have to stick in,” said Toy.

“I was four down through six this afternoon and got one back to be three down at the turn, but then lost another at the 10th. It was my doing, to be fair, going four down, I was on a bit of a bogey train. But I managed to pick myself back up and hit some better shots which gave me the confidence. I was able to finish quite nicely too, as well as a nice up-and-down at the 18th.

“You have to stick around, not give your opponent anything or give away cheap holes. It’s a case of digging in deep and my confidence levels then rose. After 39 holes, I’ll sleep well tonight!”

More heroics from the Carlyon Bay member came in the afternoon quarter-finals. The 22-year-old, who is bidding to become the first player to defend the Women’s Amateur title since 2005, was four down after 10 holes to Lithuania’s Gilė Bitė Starkutė. Again, she refused to be defeated and took the match to extra time after winning the 18th with a superb up-and-down and then emerged victorious at the 19th, her 39th hole of the day. It was tough luck on Starkutė, who had beaten another English player, in-form Emily Price, 3&2 in the last-16.

Fuller, who won the English Women’s Open Amateur Stroke Play Championship last week, fired four birdies in her first seven holes against Italy’s Alessia Nobilio and was in control at three up after 13 holes. But Nobilio, the top-ranked player in the field and world number five, kept battling and won the 14th, 15th and 17th holes in a brilliant comeback.

Both players sliced into the water off the 18th tee in breezy conditions to continue the drama, before Fuller played a stunning approach from 192 yards to just two feet to close out a one-hole triumph.

Fuller now faces fellow 18-year-old Paltrinieri in the semi-finals, as the world number 27 continued her fine form. She saw off Sharna Dutrieux 6&5 and then was also a comfortable 5&4 winner over Caitlin Whitehead.

In the other semi-final, Toy will come up against Aline Krauter. Having knocked out Hannah Darling in the last-16, the 21-year-old won her all-German meeting with Paula Schulz-Hanssen 4&3.

Both semi-finals are played tomorrow morning, ahead of the 18-hole Final in the afternoon. As Toy knows, there are significant rewards for the champion with exemptions into the AIG Women’s Open and, traditionally, the US Women’s Open, The Evian Championship and Augusta National Women’s Amateur Championship.

Live scoring, news and video can be followed at www.RandA.org as well as on The R&A’s social media platforms.