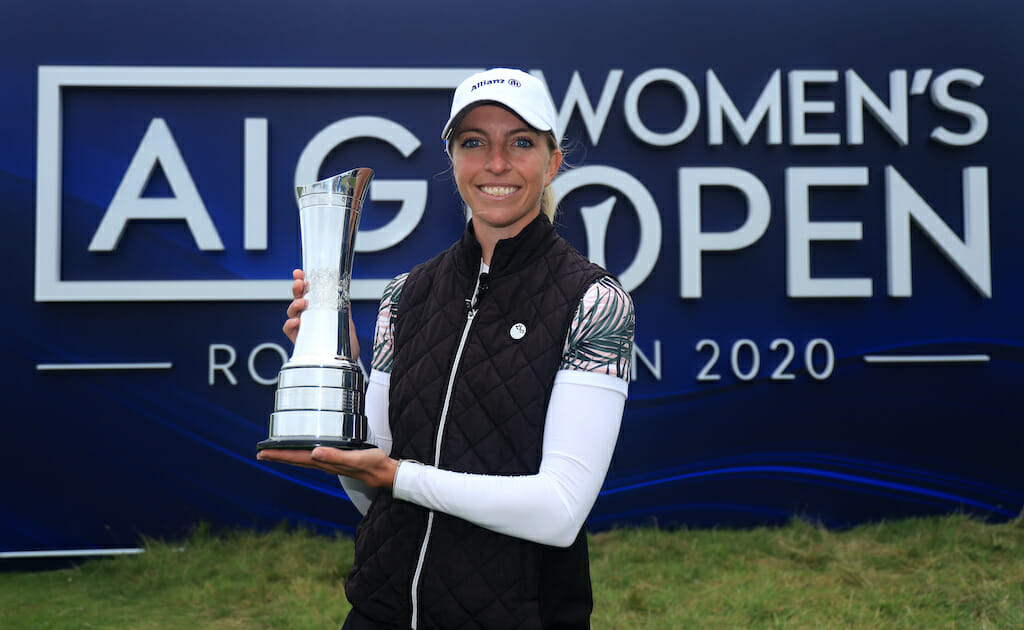 Stephanie Meadow signed off on a great week in Troon with an even par effort but the story belonged to Symetra Tour star Sophia Popov who claimed a remarkable AIG Women’s Open win.

For Jordanstown professional Meadow, her final round 71 was her best showing of the week with a bogey and a birdie complimented by 16 pars in a rock solid showing.

She finished in a tie for 39th and will benefit from a tidy ranking points haul towards the Race to CME Globe, yet all eyes remained glued to the top of the leaderboard where Popov, very much in uncharted waters, showed no signs of flinching in her pursuit of an unthinkable Major title.

The 27-year-old, who came into the championship ranked 304th in the world and without a main tour victory, secured the winner’s cheque of $675,000 after a stunning two-stroke success over the famous Ayrshire links.

Leading by three shots overnight, she held her nerve to close with a final round three-under 68 to post a winning total of seven-under-par 277 and become the first German to win a women’s Major championship.

Popov, who qualified for the AIG Women’s Open at the Marathon Classic two weeks ago, can now enjoy a life-changing triumph after her superb play in Scotland.

An emotional Popov, whose previous appearance in the AIG Women’s Open was as an amateur in 2011, said of her brilliant win, “It feels amazing. There’s a lot of hard work behind it, and a lot of struggles that I went through the last six years, especially health-wise [Lyme disease]. I’m glad I stuck with it.

“I knew my game was in really good shape. I know anything’s possible and I think I took that belief with me to every round, but I never expected this. Obviously, I was nervous the whole round and I’m just so glad I could get it done.

“I guess it is an incredible story and I think, just personally for me, that’s why I broke down on the 18th hole because it’s been something I couldn’t have dreamed of just a week ago.”

After a challenging week of wet and windy conditions at the first women’s Major of the year, Popov came out on top of a strong field representing 32 countries and featuring Major champions, Solheim Cup stars and home favourites.

During an entertaining duel on the front nine, it looked like Suwannapura was going to push Popov all the way. The German bogeyed the opening hole to immediately give the field hope yet responded with back-to-back birdies to extend her lead to four. Suwannapura went on a brilliant run of four birdies from the 4th to close the gap to just a shot, but again Popov hit back with a birdie at the 6th.

Suwannapura faltered with dropped shots at the 11th and 13th on her way to a fine 67 and when Popov found birdies at the 15th and 16th, she was able to cruise to victory before breaking down in tears after her final bogey putt dropped.

Popov, who was caddying for her close friend Anne van Dam at the LPGA’s recent Drive On Championship, added: “The last two holes, I could take it in a little bit and I looked around and it’s just so beautiful, such an amazing course. I grew up playing the Women’s Amateur, the Girls’ Amateur and I honestly like the weather, except for I get really cold.

“Considering everything we have to deal with right now with COVID-19, the way we were taken care of was just incredible, and I want to say ‘thank you’ for that. We’ve been extremely privileged.”

Lee, the world number eight, was unable to make a sustained challenge, highlighting her round with an incredible up-and-down for par at the short 8th, the Postage Stamp, as she closed with a 69 for a three-under total.

Park posted seven birdies in a round of five-under 66 to share the lowest round of the week, with American Austin Ernst fifth on level-par and Japan’s Momoko Ueda sixth on one-over. American Ally McDonald finished in style with her own 66, climbing 35 places on the final day for a six-over total.

The AIG Women’s Open made its debut on the prestigious links of Royal Troon, which has hosted The Open on nine occasions, most recently in 2016 when Sweden’s Henrik Stenson triumphed.