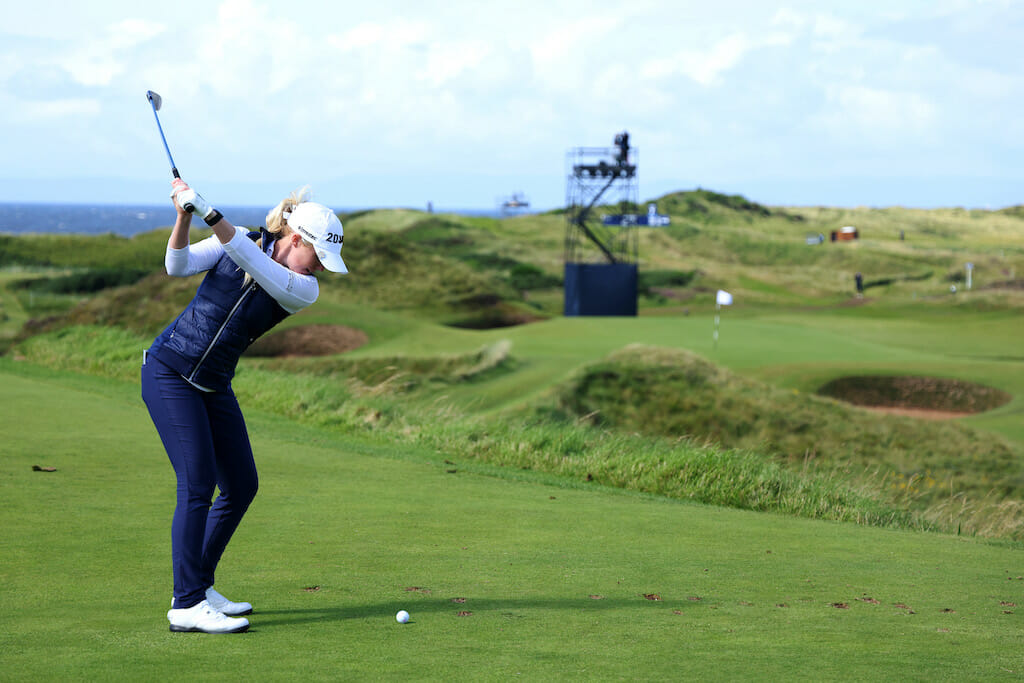 Stephanie Meadow enjoyed a moving day leaderboard ascent after posting a solid one-over par round of 72 at the AIG Women’s Open at Royal Troon.

In what has been a brutal test of golf for the best in the women’s game, the Jordanstown professional finds herself as the sole Irish representative over the weekend in Scotland after both Leona Maguire and Olivia Mehaffey missed the cut.

And in her bid to take full advantage, Meadow performed well, firing three birdies in her closing six holes to remain on single digits over-par at plus-nine, a score that sees her trailing just outside the top-40 ahead of the final day.

It’s all about Sophia Popov atop the board, however, as she continued her love for Royal Troon, opening up a commanding three-stroke lead heading into the last round.

The 27-year-old German, making just her second appearance in the championship, heads a talented international field at the first women’s Major of the year. In more favourable conditions, with sunny spells and less wind, Popov matched the lowest round of the week with a four-under-par 67 to move to four-under after 54 holes.

The world number 304, who only qualified for the event through the Marathon Classic just two weeks ago, highlighted her bogey-free day with a brilliant driver off the fairway for an eagle at the par-5 4th and then a glorious 30-foot birdie putt at the par-3 17th. Having won three times on the development Cactus Tour in the USA this year, Popov is now seeking her first Major title.

“There are going to be a lot of nerves there tomorrow and I would be lying if it wasn’t that way,” she said.

“That’s why we play the sport. We do this in order to be in a position like I’m going to be in. Yeah, it’s definitely a position I’ve never been in, so we are just going to have to see how it goes, take it one shot at a time and just try to do my thing.”

With overnight leader Dani Holmqvist struggling to a 77, Popov is three shots clear of Australian Minjee Lee and Jasmine Suwannapura from Thailand. Both Lee, the world number eight, and Suwannapura recorded impressive 69s to lead the chasing pack on one-under-par.

American duo Austin Ernst and Lindsey Weaver, helped by a miraculous chip in for par at the 12th, are two shots further back in a tie for fourth place at one-over-par, alongside another German, Caroline Masson.

New Zealander Lydia Ko, chasing her first win since 2018, recorded a double bogey at the 10th to damage her hopes and is with Denmark’s Emily Kristine Pedersen and American Kristen Gillman at two-over. Gillman posted five birdies in a superb front nine – including a near ace at the 95-yard 8th, the Postage Stamp – before having to settle for a 68.

There was a notable move too from Australia’s Katherine Kirk, who stormed 30 places through the field after a four-under 67 to reach three-over. However, world number four Nelly Korda suffered at the short Postage Stamp, making a double bogey, as she fell to four-over.

The 2018 champion, Georgia Hall, rolled in three birdies in her first eight holes, but slipped to 10-over after a 74, while Scotland’s Catriona Matthew posted the same score as her hopes also faded, dropping to eight-over. Mel Reid went in the other direction as the Englishwoman signed for a 68 to reach six-over and is the leading British player going into the final 18 holes in Ayrshire.