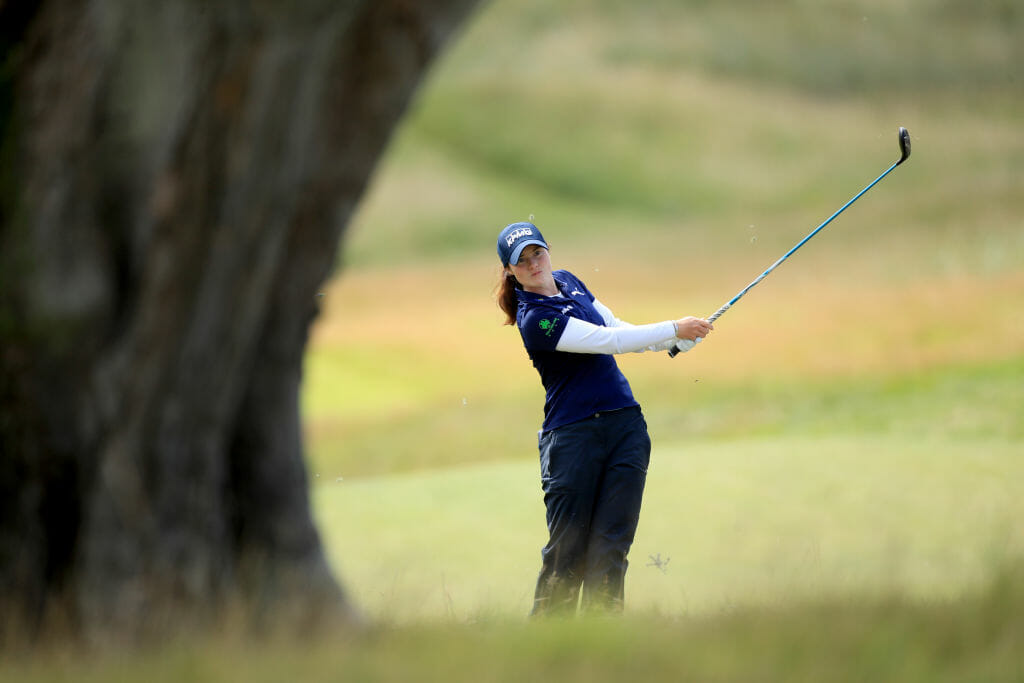 Leona Maguire plays her second shot on the 11th hole during the second round of the Aberdeen Standard Investments Ladies Scottish Open at The Renaissance Club on August 14, 2020 in North Berwick, Scotland. (Photo by David Cannon/Getty Images)

Leona Maguire produced another solid round on day two at the Aberdeen Standard Investment Ladies Scottish Open which sees her in T35 place ahead of the weekend rounds.

The Cavan native had to stay patient and keep focussed as she returned to the course early on Friday to complete her first round which was stopped due to daylight and a superb birdie on the 18th got her back to one over par and into the top-50.

In tough scoring conditions Maguire then went on to record three bogeys on her 2nd, 11th and 15th holes but also carded two birdies on the 5th and 7th for her second consecutive round of one-over par, moving her up the leaderboard to within seven shots of the pace being set by LPGA veterans Stacy Lewis and Azahara Munoz, both on five-under par.

Lewis shot the round of the day on Friday, closing with four birdies on the final four holes for a 5-under 66 having come to The Renaissance Club off a top-10 finish at last week’s Marathon LPGA Classic.

“I’m really excited. It’s as good as my body has felt in a really long time,” said Lewis, a 12-time LPGA Tour winner who last reached the winner’s circle at the 2017 Cambia Portland Classic. “Just had more of an understanding of what’s going on and it’s all added up to some good golf so far.”

Munoz meanwhile was bogey-free through 17 holes, but a stumble at 18 dropped her to -2 on the day and into today’s final group alongside Lewis.

“I’ve been playing pretty good the last couple weeks,” said Munoz, whose only LPGA Tour victory came at the 2012 Sybase Match Play Championship. “I just always feel I have to be a little patient and I think this week I’m doing a really good job at that. I just need to keep doing what I’ve been doing, just try not to force things and just let it happen.”

Jennifer Song holds solo third at -4, with Amy Olson and Olivia Cowan tied for fourth at -3. First-round leader Nicole Broch Larsen followed Thursday’s -4 with a +2 on Friday and is one of four players tied for sixth at -2.