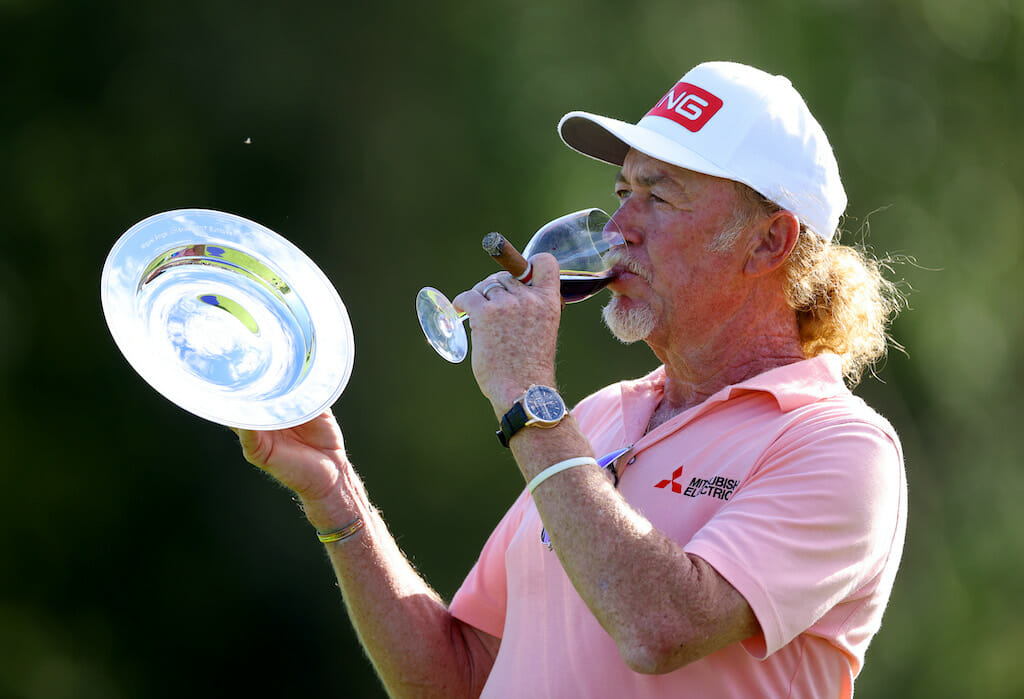 Miguel Angel Jimenez poses with an award while drinking a glass of wine after making his 707th European tour start, a tour appearance record (Photo by Richard Heathcote/Getty Images)

It was a very much a day for Spanish golfers with three players, including Miguel Angel Jimenez celebrating his 707th Tour event, leading the field on the opening day of the Hero Open at the Forest of Arden course near Birmingham.

Madrid-born Sebastian Garcia Rodriguez, 31, grabbed two eagles, eight birdies and also two bogeys in a sizzling 10-under par 62 in just his 18th main Tour event. It was his lowest career score by two shots in an overall 100th event when including his secondary Challenge Tour showings.

Garcia Rodriguez enjoyed an exceptional 2019, beginning the year with two victories on the satellite Alps Tour and ending it as a Challenge Tour graduate as he finished 15th on the Road to Mallorca Rankings to earn a maiden campaign on the European Tour.

“For me it is incredible to shoot a 62,” he said.  “Today the key was the driver and the putts. It was just so close to the hole all the time. It’s amazing. It’s my lowest score on the European Tour.

“It’s incredible, it’s my dream. The course is perfect and the range is lovely.”

Five-time Tour winning Pablo Larrazabal produced a morning round of an eight-under par 64  to be in second place as the 37-year old seeks to win for a second time on the 2019/20 wraparound Race to Dubai schedule after capturing last December’s Alfred Dunhill Championship in South Africa.

However, the day belonged to Jimenez.

The 56-year old was teeing-up in his 707th European Tour event since making his Tour debut at the 1983 Benson and Hedges Spanish Open.

Jimenez brilliantly snatched eight birdies in a round of 64 to join Larrazbal and ensure a Spanish trio in front on day one.

“It’s been a wonderful day, eight under par. Beautiful summer day and especially now on the 18th here with all my colleagues. Very emotional,” said Jimenez.

“I cannot describe my day, you have to be inside my skin.”

It wasn’t such a euphoric day for Ireland’s competing quartet though Cormac Sharvin and Jonathan Caldwell can be relatively pleased with their opening efforts.

Sharvin is the best of the bunch after carding a two-under par 70 to be just outside the top-40 while Caldwell return a 71 to share 63rd.

Both Gavin Moynihan at plus-one and Paul Dunne at plus-two have their work cut out to make the weekend cut.