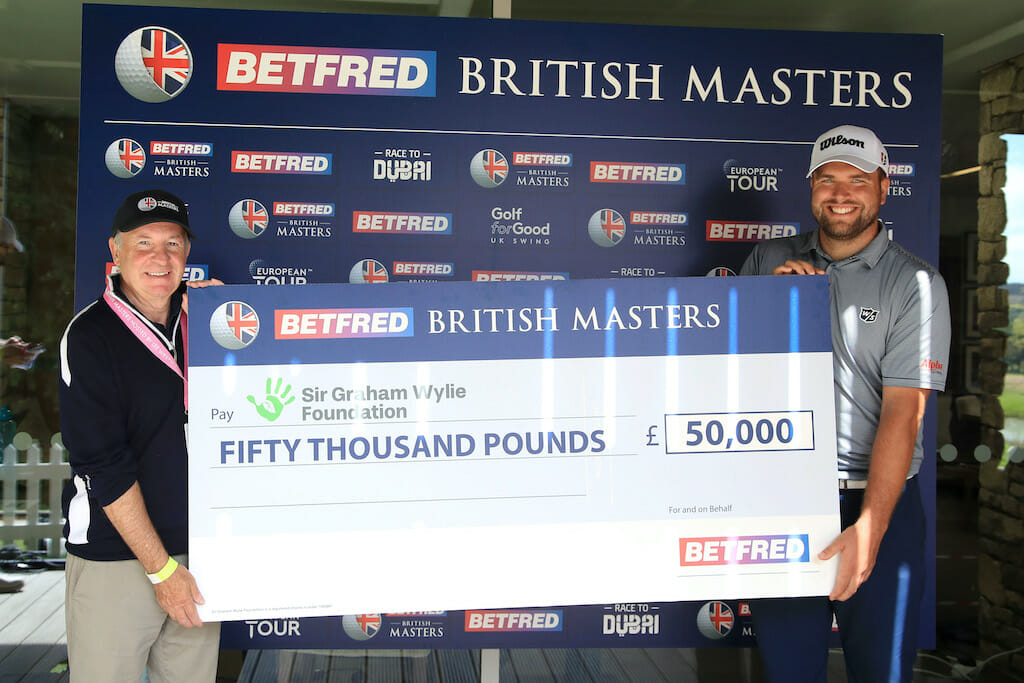 Englishman Jack Senior claimed the first hole in one of his European Tour career at the Betfred British Masters hosted by Lee Westwood, to secure a £50,000 donation from Betfred to the tournament’s Official Charity, the Sir Graham Wylie Foundation.

Senior holed his tee shot from 176 yards with a seven iron at the par three 14th hole at Close House Golf Club to earn the charity donation from the title sponsor Betfred, who are supporting the European Tour’s #GolfforGood initiative. The money will be used to fund projects helping people impacted by the Coronavirus pandemic.

The hole-in-one helped the 32-year-old surge up the leaderboard as he signed for an eight under par round of 63 to move to nine under par overall, but it is that one shot in particular which will have a particularly significant impact.

“It ended up just being a really good number,” said Senior. “My caddie and I talked about the wind , it came up a bit and that made it a comfortable seven iron for me. It pitched about six inches short, one bounce past and it just swung back in there. I was fortunate that it ended up in the cup and it was a great shot.

“Obviously there was no crowd there to cheer it but I celebrated with my playing partner Guido Migliozzi and there were a few people down the green there who told me it went in, so it was a great feeling. It’s also fantastic to be able to give £50,000 to charity for one golf shot. It’s incredible really.”

Sir Graham Wylie, the owner of Close House, said: “The Foundation is mainly there to help, educate and inspire children in the North East of England,” said Wylie.

“But this money we will receive today will go towards helping those affected by the Coronavirus and key workers. We will find some projects and we will fund them and hopefully we can help make people’s lives better. So we’re very grateful to Betfred for their kind donation and also to Jack for making the hole-in-one today which enables us to receive it.”

Betfred boss Fred Done added: “Well done Jack Senior and I’m delighted to write out a big cheque for such a fantastic cause.”

Betfred is also donating £1,000 for every birdie and £2,000 for every eagle made by tournament host Westwood across the four rounds to the Sir Graham Wylie Foundation.

The Sir Graham Wylie Foundation will also receive a further donation from the European Tour as part of the #GolfforGood initiative, with each host venue in the UK Swing receiving £50,000 to distribute to a charity of project in their local community. In total the European Tour will donate £500,000 to good causes during the UK Swing as part of #GolfforGood, with the money equally distributed between charities local to the tournament venues and charities chosen by the leading ten players in a mini Order of Merit which will run across the six tournaments.

The Sir Graham Wylie Foundation will also benefit from an online silent auction during the tournament week. Visit: GIVERGY.UK/GOLFFORGOOD for a full list of the auction items.

The ‘Golf for Good’ initiative is a narrative which will underpin the season and aims to give back in three key areas:

▪ Supporting the Communities where the European Tour plays.

▪ Rewarding the true heroes, such as the front line workers.

▪ Promoting the many health benefits that golf offers.