Trump using all his power to return the Open to Turnberry 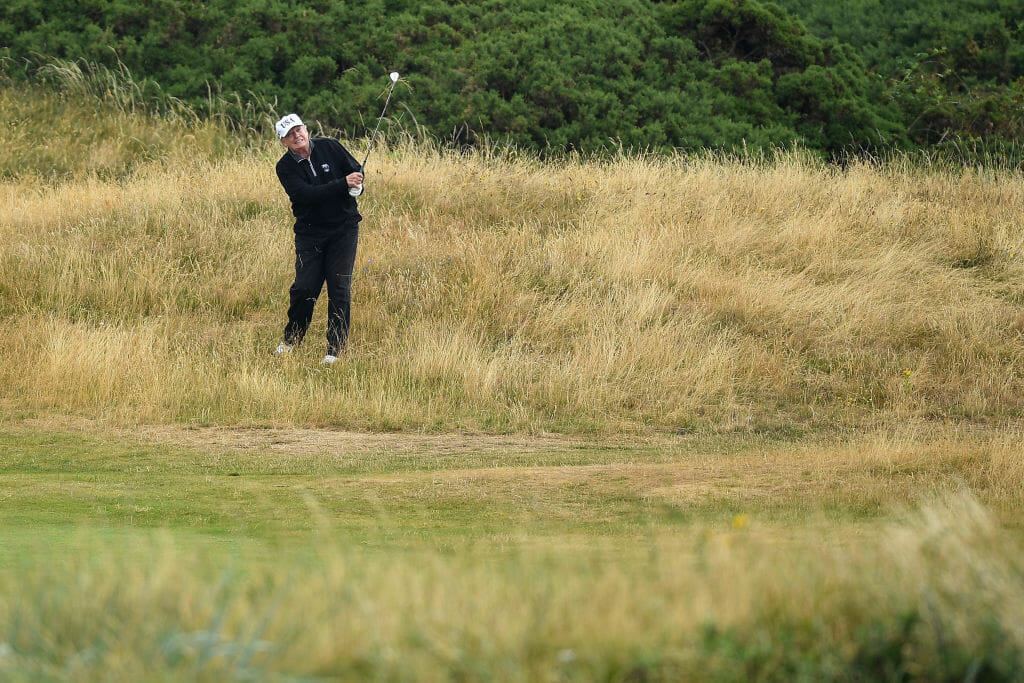 U.S. President Donald Trump plays a round of golf at Trump Turnberry. By Getty Images

As sure as day follows night, it seems the word ‘Trump’ will never appear on the most famous Major Championship trophy in all of golf.

You see, it’s well known that the winner of the Claret Jug will have his name on the trophy, but he also will have his four scores and 72-hole tally. And the ‘Champion Golfer of the Year’ will have the name of the host golf course where he won.

For any future winner of the Open Championship, and when golf’s oldest major should return to the Ayrshire coast that overlooks the Ailsa Craig, there will never appear … ‘Trump Turnberry’.

The Open was last held at Turnberry in 2009 when Stewart Cink denied Tom Watson what would have been a record-setting sixth Open title. And five years after Cink was handed the Claret Jug, the Trump organisation somehow found $US 200m — $US 50m in buying the property and some $US150m in redesigning the championship course and spectacularly refurbishing the stunning hotel complex.

In early 2015, Trump, as the then Republican nomination for the Presidency, and on the advice of then R&A CEO Peter Dawson, arranged for Martin Ebert to carry out a full refurbishment of the course.

Eighteen months later and on the 1st June, 2016, the ‘new’ Trump Turnberry was opened for play and what a stunning transformation as the golf world would soon attest.

However, a few months later and with Trump confirmed as the 45th US President, there was the question raised: ‘Now that Trump has been elected as US President, will Trump Turnberry again host The Open?’

That question was met with a stern response: ‘Never, while Trump is US President or never while Trump’s name is associated with the Ayrshire venue will The Open be played at Trump Turnberry’.

Trump Doral in Miami had played host to the WGC – Cadillac Championship but then in August 2016, months after Adam Scott captured the 2016 title, Presidential nominee Trump made his now infamous, bitterly twisted and disparaging Mexican ‘drug dealers, criminals and rapists’ comments.

It came with a great sigh of relief, with Trump now as President, that the 2017 hosting of the WGC was moved to Mexico and much to the enormous delight of those who to this day continue to look upon the U.S. President with total disregard.

It seems also for this reason Trump Turnberry will never host The Open and this on top of news that President Trump had leaned on his US Ambassador in the UK to also lean on the R&A to get The Open back to Turnberry.

Robert Wood Johnson IV, is the USA ambassador to the UK., and is believed to have informed his colleagues in February 2018 that the U.S. President asked him to see if the organisers of The Open could be persuaded to host the event at the Trump Turnberry resort in Scotland.

This is according to reports in the New York Times.

It comes as no surprise, nearing the hopeful end of Trump’s Presidency,

that Mr Johnson’s deputy, Lewis A Lukens, reportedly advised him not to comply with Mr. Trump’s demands as it would be unethical to use the presidency for private gain.

Ethics experts have noted that a violation of the clause could occur as the British or Scottish Government would likely have to pay for security at the tournament, an event that would profit the President.

Though it does appear the ambassador ignored the advice of his ‘2IC’ as it is believed that Johnson (And not UK Prime Minister Boris Johnson) did raise the idea of the Trump Organisation hosting The Open with the Secretary of State for Scotland, David Mundell.

Norman L Eisen, who served as President Barack Obama’s special counsel for ethics, told the Times: “It is diplomatic malpractice because once you do that, you put yourself in a compromised position.

“They can always say, ‘remember that time when you made that suggestion’. No experienced diplomat would do that.”

In a previous interview, Mr Mundell said it was “inappropriate” for him to discuss his dealings with the U.S. ambassador and referred the publication to a statement from the Government.

The statement said Mr Johnson “made no request of Mr Mundell regarding the British Open or any other sporting event” but the New York Times noted the statement does not acknowledge whether Mr Johnson mentioned the Turnberry resort.

The U.S., State Department said in a statement: “We stand by Ambassador Johnson and look forward to him continuing to ensure our special relationship with the UK is strong.”

A spokesman for the R&A, Mike Woodcock, said a committee selects the site from a pool of 10 courses in Scotland, England and Northern Ireland based on factors such as the readiness of the course and public infrastructure.

He said: “We haven’t received any approaches from the British government or the Scottish Government about this”.

Again, it would seem highly unlikely golf’s oldest major will be heading to Turnberry as long as the course bears any connection with the name Trump.