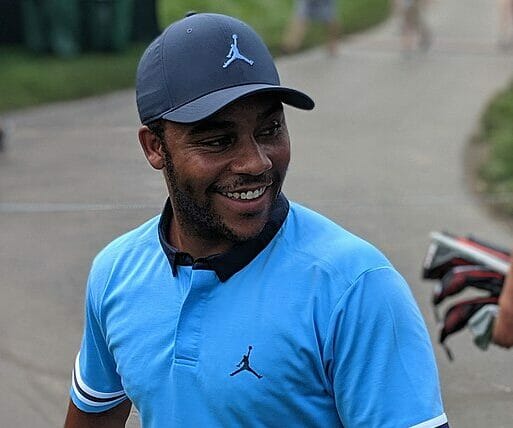 After bravely going public with a reaction to the riots and unrest in his native US, who would have thought Harold Varner III would share the lead on day one of the Charles Schwab Challenge in Fort Worth, Texas.

Varner had used his Twitter account in calling for social justice and unity following the slaying on May 25th of fellow black man George Floyd in a suburban Minneapolis street.

Varner’s extremely heartfelt comments, and also those of Tiger Woods, clearly touched a PGA Tour nerve with Tour Commissioner Jay Monahan meeting with Varner before taking what is believed to be an unprecedented move in arranging a minute’s silence at 8.46am local U.S. time on day one of this week’s return to competition after a three-month Covid-19 lockdown.

And given the emotional drain in going public with his 600-word plus statement, it’s truly amazing Varner should come out in the first round to post a seven-under par 63 to share the lead with the score set earlier in the day by England’s Justin Rose.

Varner had birdied his opening two holes and then at the par-4 18th, the 29-year old holed an 11-footer to match Rose.

“My game was super solid as I just hit 18 greens, but good to be back inside the ropes and just doing what I love to do, play golf and have fun,” he said.

“The last time I was here, I hit a lot of drivers, and that obviously is not the key to this place. Just had a really good game plan. Just hit a lot of fairways so you give yourself a lot of chances to hit greens, and man, it’s just fun to just get back out there.

“It didn’t matter if I shot 80 today. I love playing golf, but you don’t realize it until it’s taken away.”

And Varner, who did not tee-up till the afternoon, was asked what he was doing at 8.46am.

“8.46am? I literally have no clue. I think I was watching “The First 48.” But when I got to the gym it was on TV, and I just couldn’t hear but I could see that they were just — man, I don’t really know what they were thinking on the golf course, but it was just crazy what they did,” he said.

“I thought it was pretty cool.”

And there was also the other aspect of this week’s event and that is dealing with the ‘social distancing’ rules in place.

“I’m a big hugger. I love to hug people,” he said smiling.

“I love to just — I care about people. It’s weird. Like you don’t realize how much a handshake matters, looking a man in the eye or a woman, whatever that may be, you don’t do that. So, I’ve been struggling, honestly.”