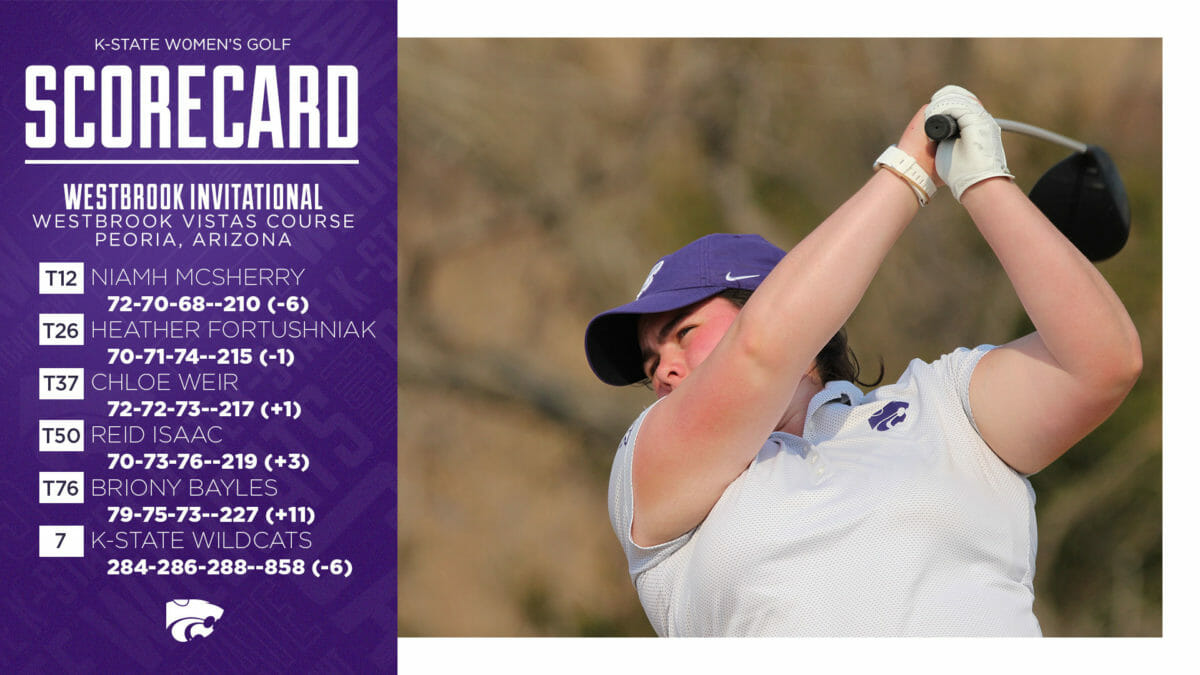 Niamh McSherry needed just 68 strokes – a career-low tally – to get around Westbrook Village Vistas Course on Monday, climbing 10 spots up the leaderboard for a top-20 finish and leading K-State to seventh-place at the Westbrook Invite.

The junior from Lurgan tied for 12th in her best tournament finish since winning the Marilynn Smith/Sunflower Invitational last Autumn, getting better with every round and in the process also posting a new career-best 54-hole score of 72-70-68–210 (-6).

Collectively, the Wildcats shot even par on Monday and slipped one spot in the standings despite turning in their lowest team tournament score of the season at 284-286-288–858 (-6).

“Today was a battle,” K-State head coach Kristi Knight said. “Niamh had a great round – she was definitely the one that had good ball striking today. The other ladies would tell you it was much more of a struggle. Niamh hit a lot of quality shots … she carried us today.

“After that, it was a battle. I think the others got everything out of the round that they could. Ball striking didn’t appear to be quite as sharp as it was yesterday for everyone outside of Niamh. That’s golf – you’ve got to play with what you’ve got that day. I think we were able to do that and hang in there.”

McSherry was special from the outset, reaching the green on par-5, No. 5 – her starting hole – in two with a 230-yard blast from her three wood and narrowly missed eagle after a 15-foot putt burned the edge of the cup. After the tap in, McSherry immediately birdied No. 6 and later No. 9, part of five birdies on the day.

“There’s nothing really better than being able to start on your first hole without having any issues,” McSherry said. “That was probably my best shot of the day, I’ll say that.

“The start was really good to have. One thing that really stuck with me that the coaches said this morning was to be aggressive from the beginning. If we really wanted to climb the leaderboard, then we needed to start off fast.”

Mississippi State overtook Oklahoma in a two-team race to the team title, turning in a three-day tally of 32-under 832, one stroke better than the Sooners at 31-under 833. Denver’s Anna Zanusso shot her worst score of the tournament with a 2-under 70, but rode her second-round, course-record 61 to a three-shot lead for medallist honours at 16-under 200.

K-State will have a quick turnaround for its next event, the Florida State Match-Up, which begins Saturday in Panama City, Florida, part of a near weekly sprint to the regular-season finish at the Big 12 Championship (April 24-26) in Dallas.