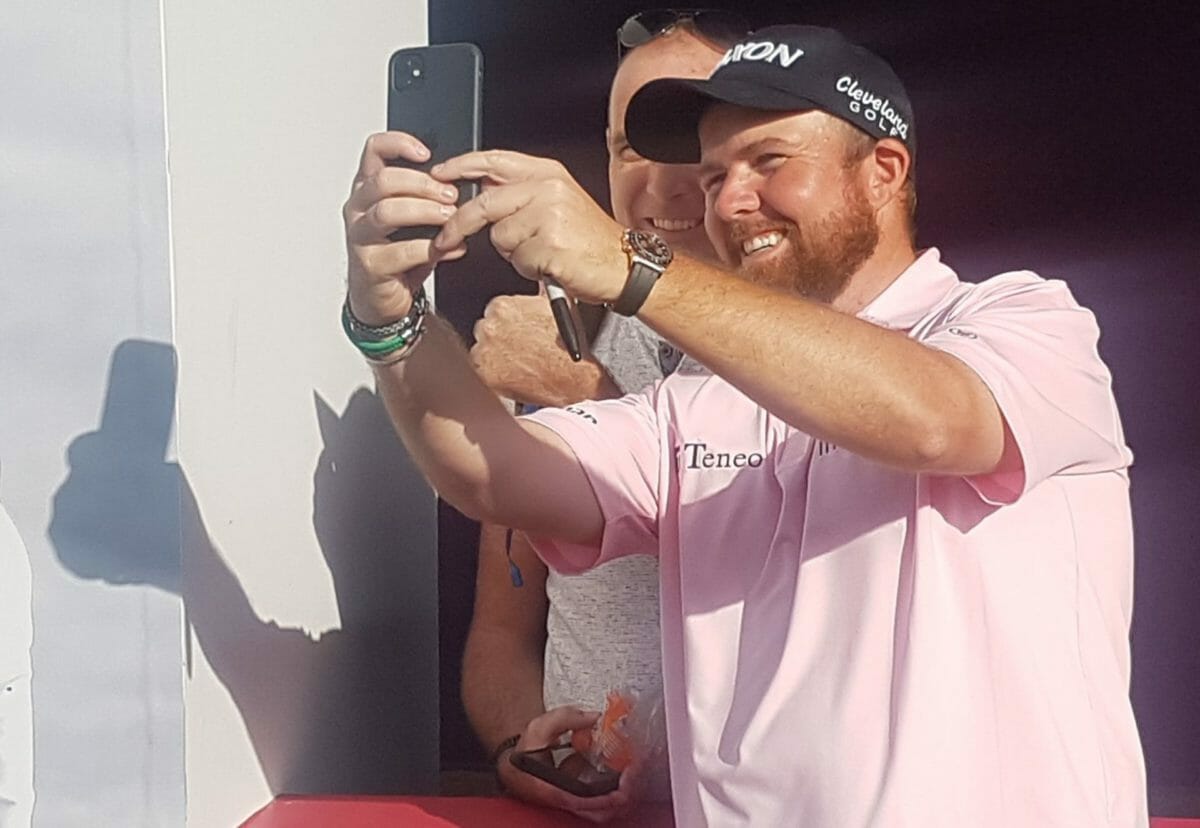 Shane Lowry takes a selfie with a fan in Dubai. Photo by @tourmiss

It somehow seemed timely as Shane Lowry left the scorer’s hut located on the edge of the practice putting green that he should bump into fellow Open Champion Padraig Harrington late on day three of the Omega Dubai Desert Classic.

Lowry had moments earlier missed a birdie putt on the close-by 18th green in an eventual round of 69 to end the day at six-under par and sharing 10th place on the Emirates course.

China’s Ashun Wu, 34 brilliantly ignited his third round by holing his second shot at the par-4 opening hole for an eagle ‘2’ in a round of 67 to lead Frenchman Victor Perez (67) by a shot, with Perez winner of last year’s Alfred Dunhill Links Championship.

“I called that start to my round ‘Happy Chinese New Year Shot’”, said Wu smiling.

Defending champ, Bryson DeChambeau posted a 70 to be sharing third place on nine-under par but is struggling with a virus, admitting he could not hear anything out of his right ear until it ‘popped’ at the 13th.

Indeed, there was the sight on the practice putting green of his manager and trainer pouring a ‘medicinal powder’ into a bottle of water as the 26-year old conducted short post-round TV interviews.

Lowry was a different kind of sick having let chances slip to close the gap on the leaders heading into Sunday’s final round.

“It was very frustrating out there today as I played great and a 69 is the worst score I could have shot,” he said.

“It would be nice to go out tomorrow and shoot a low one but then I don’t think I will need one as the forecast is for strong winds, so if the forecast is correct, I may be happy settling for another 69.

“If I just could have made two more putts coming in there and finished on eight, then that would be a great chance to be right up there with the leaders.

“As it is, I am three shots off third and five behind Wu but then looking back today, the inward nine played easy and I played it in one-under.”

Lowry commenced his third round at three-under par, five shots adrift of the lead and got the start he wanted with a birdie ‘3’ at the first before a birdie at the par-4 5th hole.

He kick-started the back nine with a first birdie of the week on 10 and while dropping a shot at 12, Lowry birdied the par-5 13th for a second of three days ahead of five closing pars.

Lowry admits he’s not been a real fan of the Emirates course despite a T12th finish a year ago, a week after leading from start-to-finish to win the Abu Dhabi HSBC Championship.

“I have never really played well here at the Emirates and while I finished 12th here a year ago, I came here very much on a high and full of confidence after my Abu Dhabi win,” he said.

“Before last year I had not contested the Desert Classic since 2014 but then I think I am a different player now.

“So, in saying that it would be nice to wrap-up this week with a good final round before we head to Saudi next week.”

Harrington had been out in the third group of the day posting a 73 and found his way to the practice putting green as the closing groups were completing their rounds.

The three-time Major winner finds himself in a share of 60th at three-over par ahead of the final round.