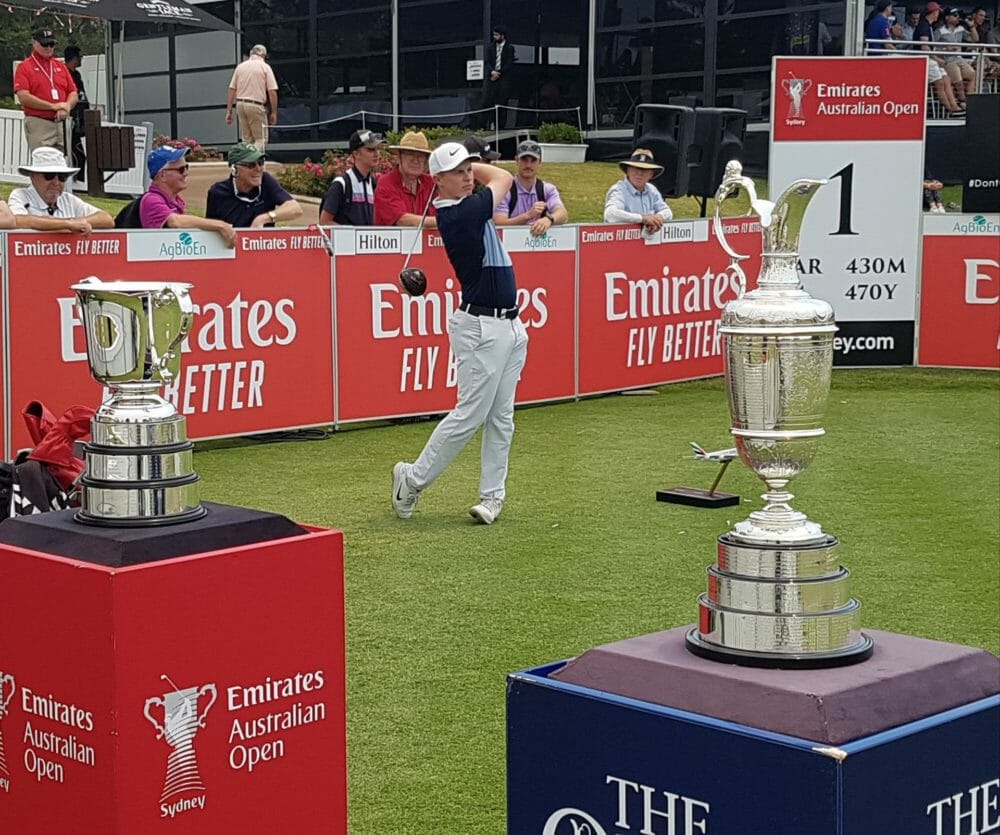 For young rookie Irishman Conor Purcell it wasn’t the choking Sydney bushfire smoke that was of concern but more a case of losing sight on the greens on day one of only his second tournament as a professional.

Purcell played well tee-to-green but simply struggled on the greens on the opening round at the Australian Open at The Australian Club in Sydney.

The 22-year old posted a disappointing six-over par 77 to be sharing 138th place, desperately needing a low second round if he is to contest all four rounds for a second week running in the play-for-pay ranks.

Earlier this year, Kanaya as the reigning Pacific/Asian Amateur champion made the halfway cut in the Masters while he is the current World Amateur No. 1.

Chung-An, who plays out of Arizona State, is the World Amateur No. 6.

The best of the professionals is Australia’s 2015 Australian Open winner, Matt Jones and his compatriots Dimitrios Papadatos and Daniel Nisbet sharing third with scores of 67.  The Sydney-born Jones, now aged 39, has been a member at The Australian since he was 15 and in winning four years ago, he denied American Jordan Spieth.

There was a special Australian Open introduction for Purcell stepping onto the first tee in the 104th staging of the event. There, placed on the right side of the tee was the Stonehaven Trophy, to be handed to the winner of the Australian Open, and the famed Claret Jug.

The Australian Open is the first of a series of International Qualifiers for next July’s 149th Open at Royal St. George’s and looking closely at the names on the trophy, there is place for the 2019 winner – Shane Lowry.

Purcell, as the current Australia Amateur champion, found himself grouped with the 1995 Australian Amateur winner, Matt Goggin, a five-time winner on the secondary PGA Tour.

The duo was seen walking down the first fairway engaged in conversation but from thereon it was a struggle for both, with the exemption of the third member of the group, Australian amateur Lukas Michel.

Michel signed for a three-under par 68 while Purcell posted six-over par 77 and Goggin a 78.

Purcell’s round was a sour of mix of no birdies but four bogeys and a 13th hole double-bogey ‘6’ when his ball got lodged in a tree.

And very much to the young Portmarnock golfer’s credit, he graciously agreed to talk about his round when many a seasoned pro would be making a bee-line for the clubhouse.

“I actually played really well but holed nothing on the greens, so I didn’t putt my best,” he said.

“I just couldn’t see the ball going in.

“I then got a bad break on the 13th when I found my ball stuck up a tree. It was pretty high up but I could see it and identify it.

“I had to take a penalty drop there but overall I never really got on the right side of the momentum. I hit the ball well but just didn’t capitalise on my chances.”

And when asked if the smoke haze has been playing havoc, with New Zealand’s Ryan Chisnall even taking to wearing a face mask, Purcell admitted it was ‘strange’.

“It was quite bad in the middle of the round and also quite strange as you get used to play in rain and wind but the smoke does affect your breathing,” he said.

“There’s nothing you can do about it and just battle on.”