Sugrue amongst those honoured at Munster Golf awards 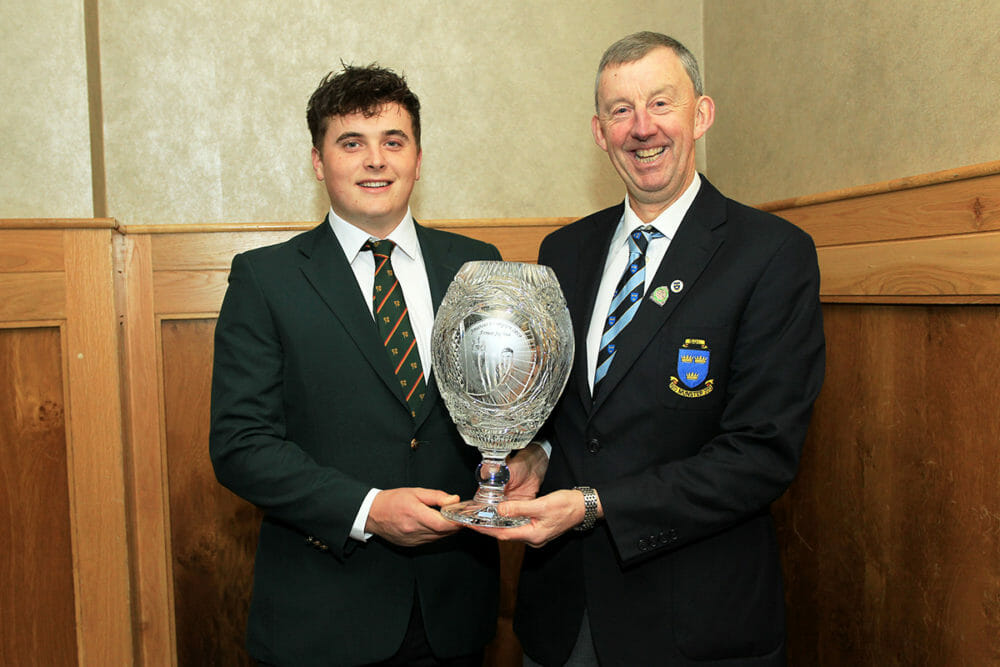 There was a standing ovation for James Sugrue at the Annual Delegates Meeting of Munster Golf in Mallow.

The Amateur Champion was presented with a commemorative trophy by Munster Golf Chairman Jim Long, in recognition of his outstanding achievements in 2019.

Speaking after receiving the trophy, in addition to winning the Munster Senior Golfer of the Year and Senior Order of Merit awards, Sugrue thanked everyone in the room for their support.  He also thanked Munster Golf for their support including all of the coaches, team selectors and Captains from all of the Munster teams over the years.

It was the final meeting of Munster Golf. In January, all golf amateur administration will transition to Golf Ireland signalling a new phase for Irish Golf.  Two motions (detailed below) relating to that transition passed with the unanimous approval delegates, and there were presentations from Golf Ireland and from the World Handicapping System.

The current Officers were returned for the final time and the Provincial Council for 2020 was also elected.

The annual awards took place before the meeting.  There was a special award to Gerard Gleeson rom Gleeson Sports Scene in recognition of their sponsorship of the Munster Boys Championship which has been in place for 27 years. There was also a charitable donation to Cope Foundation Mallow.

James is a most deserving winner of the Munster Golfer of the Year Award.  He has had an outstanding year.  James was a member of the National Senior Panel for 2019.  He achieved a top 15 finish in the Lytham Trophy, a top 20 in both the Irish Amateur and the Brabazon Trophy and also won the Castletroy Scratch Cup.

Unforgettably, James won the 124th Amateur Championship in Portmarnock on 22 June this year from a world class field becoming the second Munster man after James Bruen to achieve this notable feat.  These achievements culminated in James’s selection on the Walker Cup team to represent Great Britain and Ireland in September. Several invitations also issued following this monumental win including an invitation to play in the Open at Royal Portrush, Georgia Cup in March 2020, the Masters in Augusta in April 2020 and the US Open in Winged foot New York in June 2020.

Fionn Hickey (Muskerry) has had a fantastic year. In just about every championship he entered, he finished high up the leaderboard –  tied 3rd in the Irish Boys, runner-up in the Ulster Boys, 4th in both the  Connacht and Leinster Boys and another top ten in the Munster Boys.

In doing so his handicap, Hickey went from 2 to +1, and this level of consistency was rewarded with his selection to the Irish Boys team for the Home Internationals in Ashburnham in Wales, where he acquitted himself very well, winning three of his six matches.

Both on and off the golf course, Fionn’s attitude and behaviour has at all times been exemplary. He has been a credit to his family, his club and to the GUI.

Notices of Motion of Provincial relevance:

That the following process be adopted to approve the final set of accounts of the Munster Branch: –