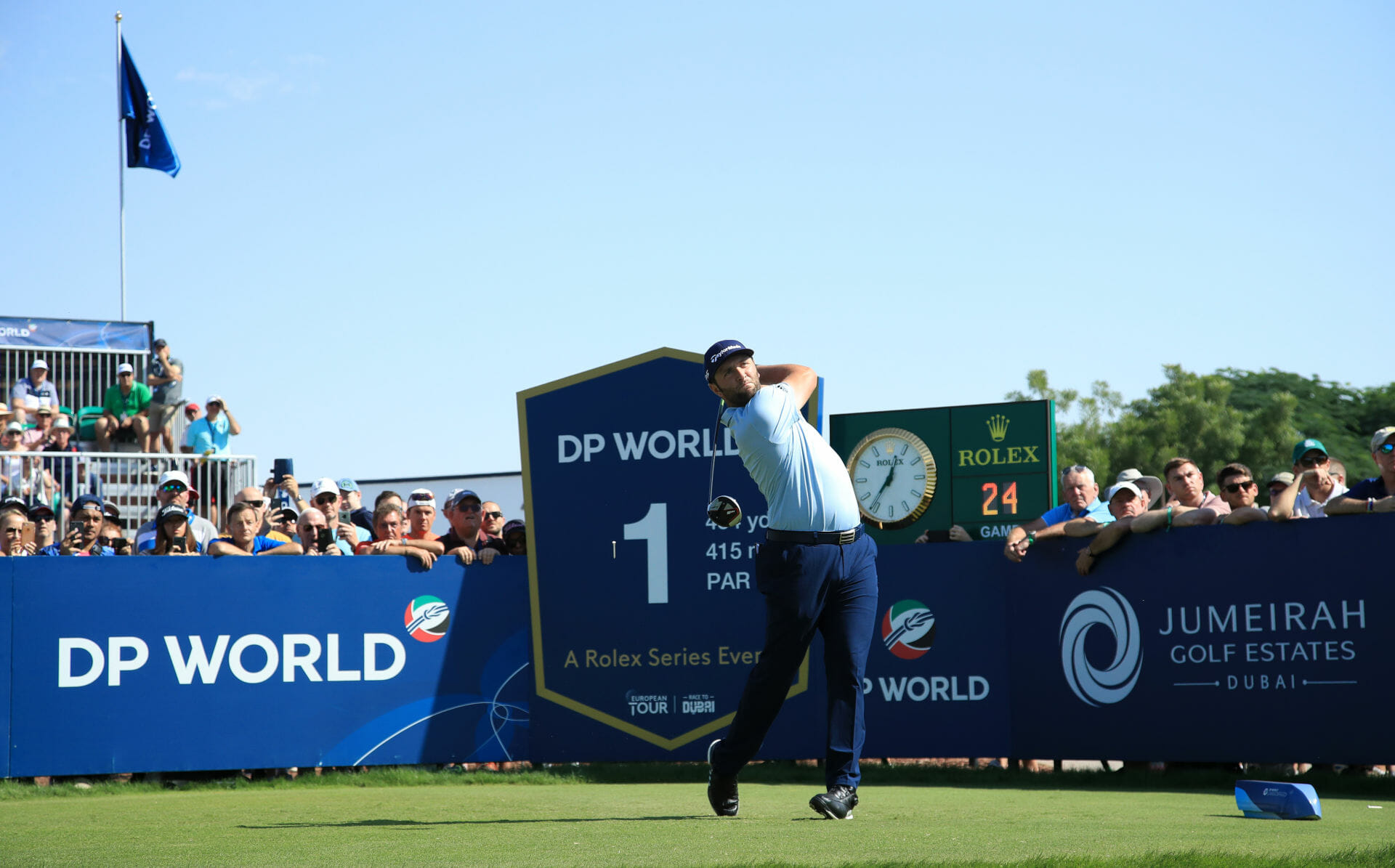 Dubai Duty Free Irish Open Champion Jon Rahm fired a six under par round of 66 to share the lead with Mike Lorenzo-Vera heading into the final round of the DP World Tour Championship, Dubai – the eighth Rolex Series event of the year – setting the stage for a fascinating finale to the 2019 European Tour season.

Spaniard Rahm birdied two of his last three holes to set the clubhouse target of 15 under par which was then matched by Frenchman Lorenzo-Vera who signed for a round of 69.

Lorenzo-Vera had held a three shot overnight advantage and looked a comfortable front-runner throughout his third round, posting birdies on the sixth, seventh, ninth and 14th holes before his only bogey of the day on the last hole after finding water off the tee and then three-putting.

With the winner of the DP World Tour Championship, Dubai earning $3million – the richest first prize in tournament golf – Rahm is now on course to win the season-long Race to Dubai, although he will have one eye on World Number Two Rory McIlroy who bounced back from a second round 74 with a 65 to sit just two shots back on 13 under par.

Rahm is the only player to win three Rolex Series titles so far and should he secure a fourth, and a second DP World Tour Championship following his win two years ago, he would need current Race to Dubai leader Bernd Wiesberger to finish outside the top two.

That looks increasingly likely after Austrian Wiesberger, the winner of two Rolex Series events in 2019, carded three bogeys from the 11th hole in his one over par 73, meaning he goes into the final round 13 shots behind the leaders in a share of 24th position.

Rahm could also yet be denied by England’s Tommy Fleetwood, who could claim his second Race to Dubai title in two years if he finishes second and Rahm does not win the tournament. Fleetwood birdied his final hole for a round of 70 and is four shots back on 11 under par, but the Ryder Cup star will be aiming to make up a deficit for the second Rolex Series event in a row after coming from six shots back  to win last week’s Nedbank Golf Challenge Hosted by Gary Player.

“It was really good.” said the Spaniard after his round. “I Got off to a great start on the front nine then kind of stalled a little bit but got things going right away on the back nine. Playing pretty solid. Really confident off the tee. Really confident with every part of my game right now. I’m hitting a lot of great shots and giving myself chances.”

“Every time I hit one close, I’m confident I can make it. With the greens being as good as they are, maybe just get the ball started on line, you know, you’re going to have a good chance. A lot of people playing good. Hopefully I can keep this going tomorrow for 18 more holes and be the last man standing.

“Gives me goosebumps to think about that. I’ve said it many times, as a Spaniard, any time you join or you have the chance to put your name on a list where there’s only one name and that name is Seve, it’s pretty impactful. It’s really emotional for all of us. To think in a not even Sergio or Miguel Ãngel or Olly or many other great players couldn’t get it done. It’s hard to believe that I have the chance to be the second. I’m just going to try to enjoy the afternoon. There’s still 18 more holes to play.”