Waste Management Phoenix Open the pick of the litter 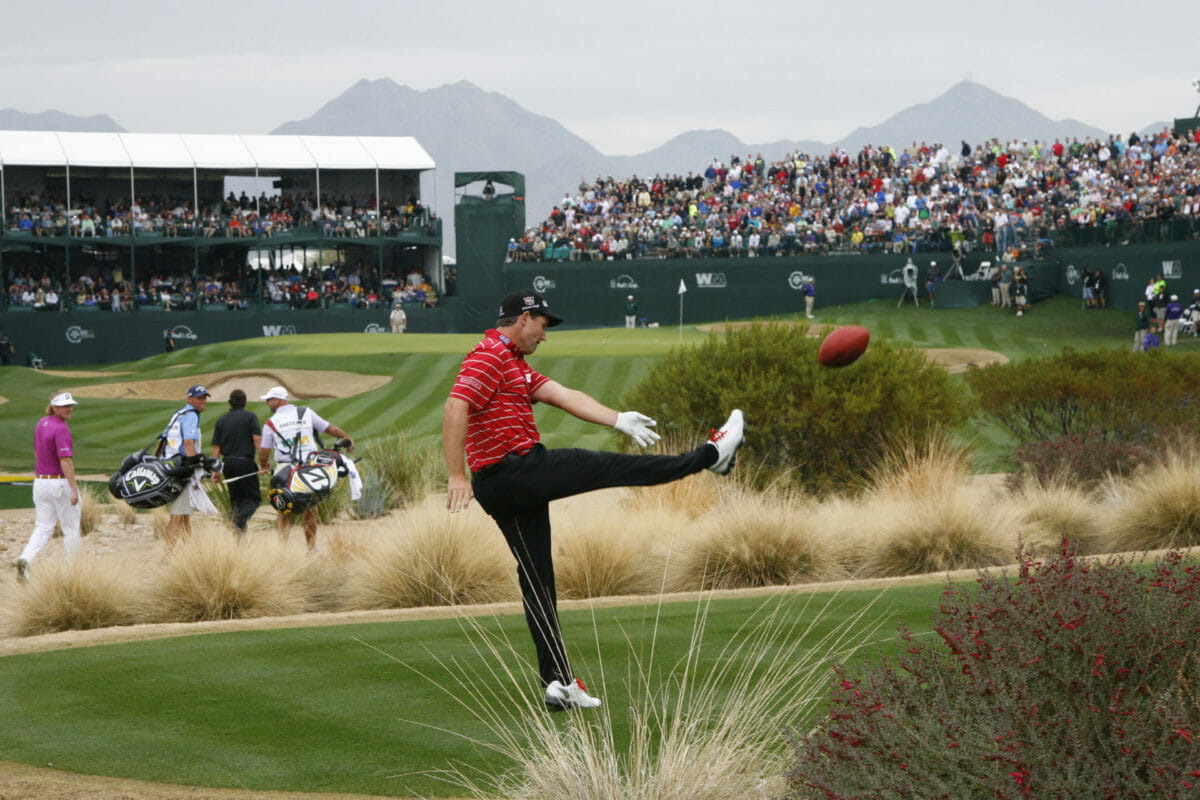 Padraig Harrington punts a football into the grandstands on the 16th hole during the final round of the Waste Management Phoenix Open at TPC Scottsdale. (Photo by Hunter Martin/Getty Images)

The Waste Management Phoenix Open was one of 10 tournaments recognised with “Best Of” awards by the PGA Tour at the Tour’s annual Tournament Meetings on November 20.

For the second consecutive season, the Waste Management Phoenix Open was named the PGA Tour “Tournament of the Year,” marking the fourth time (2014, 2015, 2018 and 2019) in the last six years the event has taken top honors. The Phoenix-area tournament also won the “Best Integrated Marketing” award for its engaging and creative year-round integrated marketing plan.

The 2019 Waste Management Phoenix Open, won by Rickie Fowler, continued to reach new levels with its fan experience, marketing and social media strategy, and charitable impact. In recent years, the tournament has enhanced the overall experience for general admission holders, adding and expanding public venues along the closing stretch of holes at TPC Scottsdale, beginning with its famous coliseum-style 16th hole. As part of a sold-out, four-night concert series, more than 38,000 fans enjoyed 11 musical acts, with headliners including Old Dominion, Jake Owen, The Chainsmokers and Snoop Dogg.

Working closely with the PGA TOUR, Skratch and Golf Channel, the tournament reached new audiences with engaging content through the “Legends of the Green” campaign, celebrity influencers and an unforgettable moment shared between 2018 Waste Management Phoenix Open champion Gary Woodland and Special Olympics golfer Amy Bockerstette. More than 50 million people have since watched Amy, who has Down Syndrome, sink a par putt on the 16th hole during a practice round with Woodland, making it one of the most viewed Facebook videos in PGA TOUR history. The moment has been covered by all major sports and news outlets, and garnered new attention when Woodland won the 2019 U.S. Open and reunited with Amy on the TODAY Show.

“On behalf of the PGA TOUR, I am thrilled to congratulate the Waste Management Phoenix Open on once again being named the ‘Tournament of the Year,’” said PGA TOUR Chief Tournaments and Competitions Officer Andy Pazder. “The Thunderbirds and title sponsor Waste Management continue to reach new heights each year with an unparalleled fan experience, seamless title sponsor integration and record charitable impact, all while continuing their mission as a zero-waste event.”

Below is a complete list of award-winning tournaments:
Most Fan-First Event
The Honda Classic

Best Use of Players
Barracuda Championship