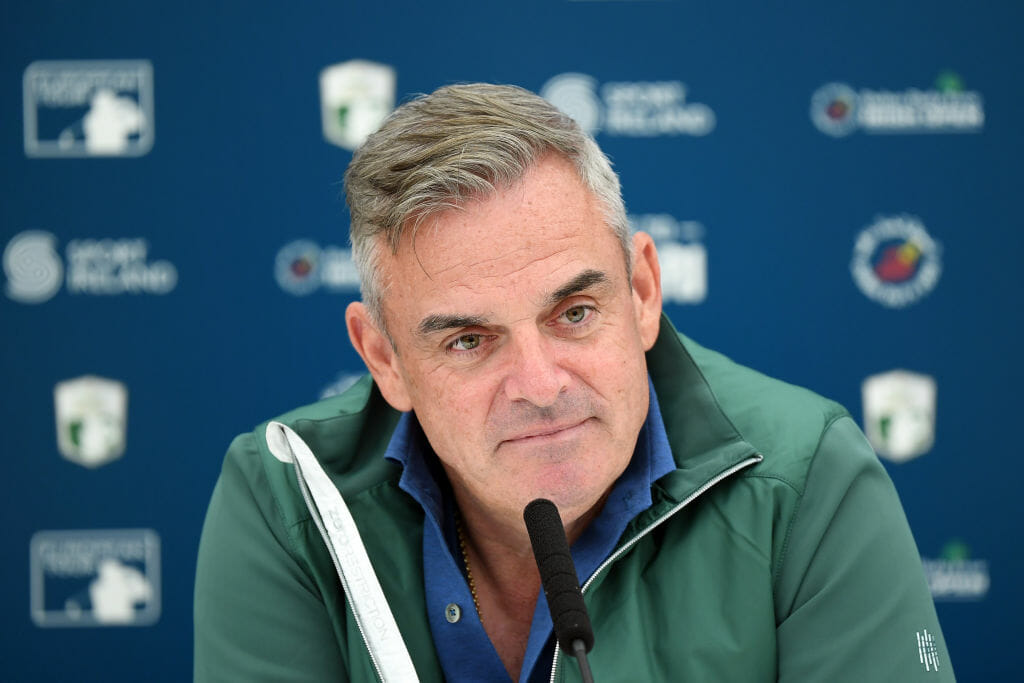 McGinley led Europe to an emphatic victory in 2014 in what became a very bitter USA Team defeat that was instrumental in the Americans now adopting the highly-successful European Team model of choosing successive captains.

But with Woods choosing to be a playing USA Presidents Cup captain from December 12th to 15th at the Royal Melbourne club, McGinley says the Americans really have learnt nothing in allowing Woods to be a playing captain.

“I’m surprised Tiger has not stepped aside as Captain of the Presidents Cup,” said McGinley via his Twitter account.

“Was one of the goals set out by the American task force in 2014 not succession planning and for immediate future Captains to gain valuable experience.”

Present European Captain, Padraig Harrington was also asked his opinion of Woods’ own selection after producing a round of 66 on day two of the Turkish Airlines Open here in Belek.

“I think it says a lot the difference between the Presidents Cup and the Ryder Cup that Tiger has picked himself as a playing-captain because I don’t think it is possible to now be a playing captain in the Ryder Cup,” said Harrington.

“The Ryder Cup captaincy is an extremely complicated, stressful and busy job and now seeing that for a first time after being a three-time vice-captain you just could not play and also captain a Ryder Cup team on top of that, so that you could not do both jobs.

“It’s right that he should play as he’s in winning form having won just recently in Japan but to do both jobs I don’t think so.

“In seeing who Tiger has also picked, he has two rookies and that is what I am looking at in taking two rookies to Whistling Straits but what worries me is that his two rookies (Patrick Cantlay & Gary Woodland), as I wish he had picked two of the older guys,” Harrington said laughing.

Harrington, however, was more in a downbeat mood despite signing for a six-under par 66 to claw his way back into the tournament after a 75 on day one.

The triple Major winner, playing on an ‘invitation’, did not drop a shot with the pick of the birdies none better than hitting an 8-iron into the last, the par-4 ninth hole, and holing the six-foot putt.

“I am happy with my score and the way I played but to be honest, if I had of shot five-under I would have been very disappointed so to birdie the last makes it a bit more palatable,” he said.

“I didn’t drive it well again today and struggled off the tee but I hit every green in regulation and pretty much every hole I had a good chance of a birdie, so a six-under return was okay and it could have been better but as I said, I didn’t drive it well so it’s a bit of an improvement.

“I hit a lot of good putts today that could have gone in, so it could have been a really, really low one and clearly now I would settle for a couple of 66s, as well over the weekend.”

Hurting the Dubliner was ‘breaking-in’ a new driver after cracking the face of his old driver some weeks back.

“I am not exactly buzzing with confidence as my driving isn’t so good and short and crooked is not great, and will work on that the next two days,” he added.

“I just haven’t driven it well and I cracked the face of my driver a few weeks ago and it’s not quite there yet with the new driver I have.  Another couple of days on the golf course will help as you can’t find the driver on the range and you have to find it out on the golf course, so it may need a few more tweaks over the weekend re the set-up.

“I was disappointed when the face cracked as I was driving it really well and I was really happy.  I have been using the same model now for three years but then maybe two but it does seem like three.”

Shane Lowry went one shot lower with a 65 to be sharing 25th place on seven-under par and in the bigger Race to Dubai picture, he’s six shots clear of Race to Dubai rival, Bernd Wiesberger who struggled posting a 72 to remain on one-under par.

“I can’t remember the last time I shot a 65 and was disappointed with myself to be honest,” said Lowry.

Lowry heads into the weekend rounds just five shots behind Austrian Matthias Schwab who added a 67 to his opening 65 and move one clear of the field at 12-under par.