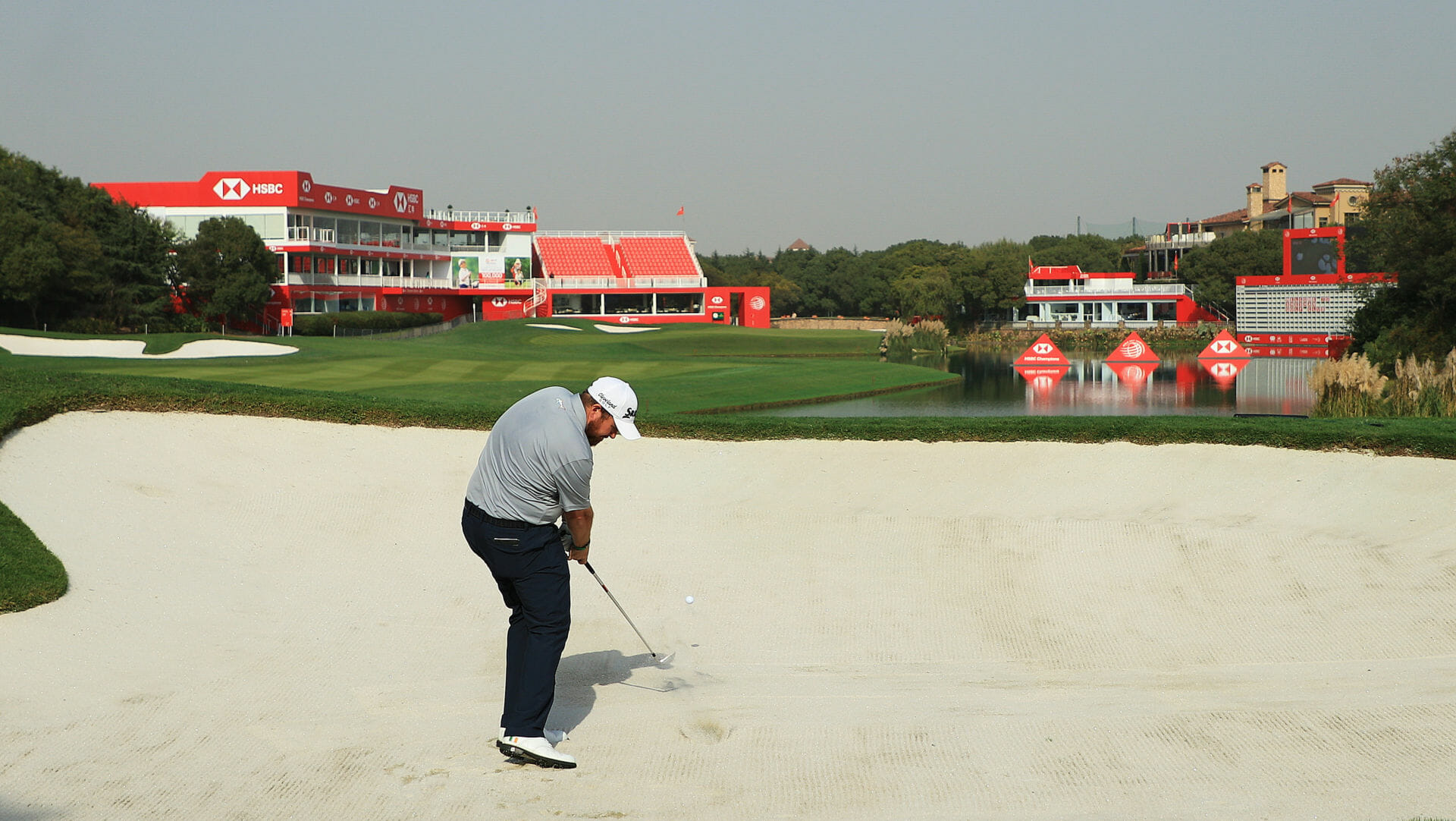 SHANGHAI, CHINA - OCTOBER 30: Shane Lowry of Ireland plays out of a bunker on the 18th hole during a Pro-Am ahead of the WGC HSBC Champions at Sheshan International Golf Club on October 30, 2019 in Shanghai, China. (Photo by Matthew Lewis/Getty Images)

It’s no surprise WGC – HSBC organisers have spiced-up this week’s China event putting Bernd Wiesberger and Shane Lowry out in the same group for the opening two rounds in Shanghai.

Wiesberger and Lowry are currently No. 1 and No. 3 respectively on the Race to Dubai money list with just four events remaining to decide the 2019 European Tour No. 1.

Lowry had led the Race to Dubai since capturing The Open with his Austrian rival to the title moving clear in capturing last month’s Italian Open. Victory in Rome was Wiesberger’s third success this year and a European Tour No. 1 crown would clearly put the Austrian golfing giant also in favour for the honour of ‘2019 European Tour Golfer of the Year’, despite Lowry’s brilliance in winning golf’s oldest Major.

It was a fine opening effort for Lowry in his first 2019/20 PGA Tour counting event at the Zozo in Japan where he tied 13th and it’s given the Offaly man plenty of reason to be optimistic ahead of the first lucrative World Golf Championship tournament of the new season at Sheshan International Golf Club.

“My last two rounds were as good as I’ve played in a while so I’m very happy,” Lowry said on his third visit to Japan.

“It’s the best I’ve driven the ball probably since the Open and I’m very excited going into the WGC – HSBC Champions in China.

“It was all to do with a bit of rhythm, a bit of confidence and a bit of a mental attitude.

“The first couple of rounds I was trying to force it a little bit, trying to shoot good scores instead of just waiting for it to it happen and today [Sunday] I just went out and tried to wait for it to happen and it did.”

Lowry now trails 663 points adrift of Wiesberger and 363 points shy of Spaniard Jon Rahm, who lies in second place, but strangely Rahm has chosen not to compete in this week’s Euro 9.22m even in the Chinese financial capital or next week’s Turkish Airlines Open at Belek.

Wiesberger and Lowry will take their tussle onto Turkey, but then only Wiesberger has entered the following week’s Nedbank Challenge in South Africa, the penultimate event of the season, before all three Race to Dubai front-runners tee-up in the season-ending DP World Tour Championship starting November 21st in Dubai.

And while Wiesberger and Lowry will have their hands full, World No. 2 Rory McIlroy is looking to continue his good closing round form last week in Japan, where he finished third to Tiger Woods.

McIlroy’s won before in Shanghai back in 2009 in an exhibition match, and clearly would love to capture a first WGC – HSBC Champions after posting six top-six finishes in his nine Sheshan course showings dating back to 2009.

“I feel like this year went very well. I played very consistently with last week being my 17th Top-10 of the year, so I’ve played consistent golf and I’ve won a few times, as well,” he said.

“It was great to get the win at The Tour Championship and win the FedExCup.

“I started this year maybe like 8th or 9th in the world, so to see that progress and to play so well and get myself back up to No. 2 with a chance of closing that gap, and I don’t think I’ll be able to quite close it as — get there by the end of this year.

“So, if I play well the next few weeks, you know, I’ll have a great platform going into next year.

“I’ve achieved most things that I’ve wanted to this year, and as you said, once I end this calendar year, I’m going to take a couple months off, December and January, and reset goals and assess where I’m at, and then go again.

“So, I’m happy with where everything is, and yeah, just want to finish the year off strongly because I feel the year that I’ve had deserves a finish like that, and you know, enjoy my time off.”