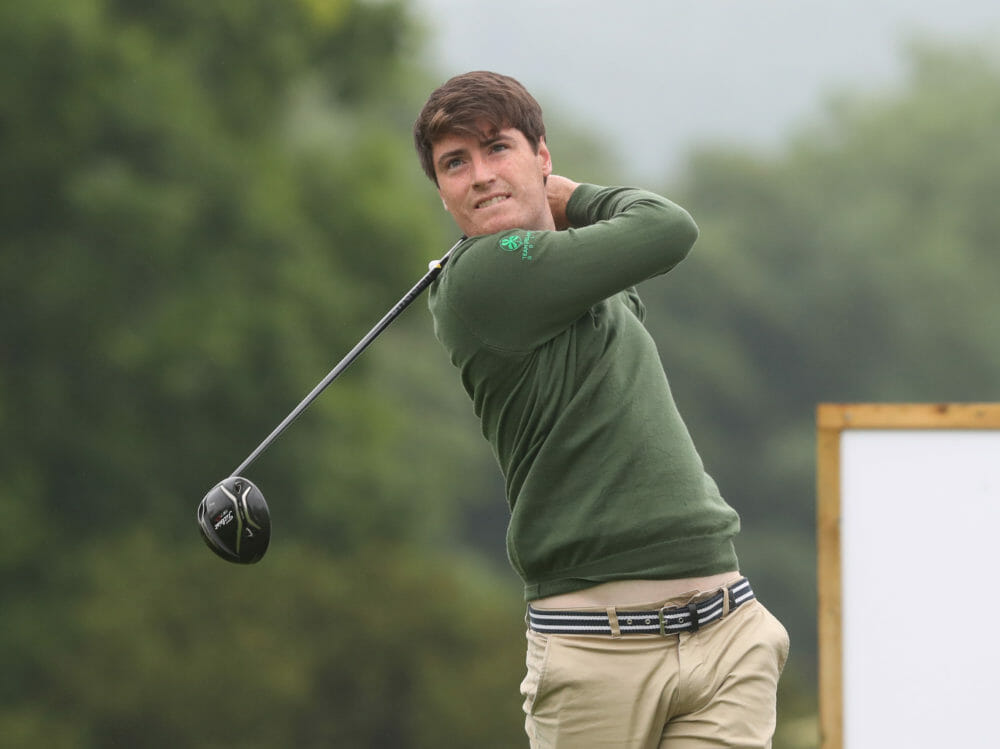 The Ballymena professional is looking to spring a late surprise after an indifferent year on Tour and opened with a two-under par 70, a steady round that included three birdies and just a single dropped shot at the final obstacle.

He’s two clear of Ireland’s leading contender on the Tour this season, Jonathan Caldwell who opened his account with an even par 72.

The 35-year old Clandeboye professional currently occupies fifth place in the Order of Merit standings and with the top-5 guaranteed Challenge Tour status after Friday’s final round, Caldwell will be wanting more to ensure he’s done enough to make the step up in grade for next year.

A winner’s cheque this week of £22,540 means opportunity knocks for a bolter from the pack to make a leap of fate on this year’s Order of Merit and Royal Dublin’s Niall Kearney falls into that bracket.

It’s been a frustrating season for the seasoned campaigner and he’ll need some fireworks on Thursday if he’s to have a say this week in Spain after signing for a one-over par 73 on day one.

Whitehead’s John Ross Galbraith is similarly up against it after posting three birdies in a 73 of his own with the pair languishing back in tied 32nd and on the wrong side of par while Limerick’s Tim Rice is one shot further adrift after two double-bogeys scuppered any momentum on the opening day.

At the top, Mikael Lundberg leads Tour Championships 2019 at Desert Springs Resort, Almeria after a stunning opening round of 64 (-8) to hold a three-shot cushion on the field.

Winner at Donnington Grove early into the season Lundberg was the only one to go bogey-free as he found eight birdies on a course where there’s no room for error off the tee.

Lundberg said: “In the beginning, I played well. There was hardly any wind. It was quite easy the front nine of course when you play good shots. The back nine was quite tricky and the wind picked up. The last three holes are tricky.”

Ben Ferguson (The Vines), Tom Gandy (Rowany Golf Club), Conor O’Neil (Pollok/Mearns Castle), and James Allan all went out in 67 for -5 to take a share going into the second day of play.

Ferguson started off with three birdies on the spin and finished with three birdies to go in the clubhouse at five under. O’Neil said: “I am pleased with it. It’s only a three-round tournament so it’s important to get off with a fast start. I was just kind of following James (Allan) he had a hot start and I was just sort of playing catch up after that.”

Allan added: “It was quite tricky on the back nine. Our first sort of seven holes was quite flat and calmer and I think that reflects in the scoring early doors and then on the back nine it picked up again. In 25c heat, it was 2017 Tour Championship winner Adam Chapman out the blocks fastest through his front nine in 30 (-7) before dropping back to finish tied ninth for 69 (-3) after a trickier back nine where the wind changed matters.

Highlights from Tour Championships 2019 will air on Sky Sports Golf on November, 12 at 20:00 and networks worldwide including DAZN from the same date.