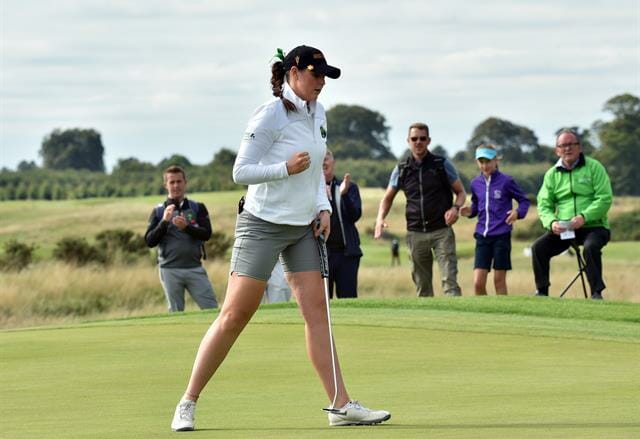 Olivia Mehaffey played a key role for ASU as a late push by the Sun Devil Women’s Golf team helped them capture the Team Championship at the 2019 Stanford Intercollegiate hosted by Condoleezza Rice at Stanford Golf Course.

With the 1994-1995 undefeated Women’s Golf team being inducted into the Sun Devil Hall of Fame this weekend, the 2019-20 team did their best impression of the legendary squad, winning the 2019 Stanford Intercollegiate by five strokes.

Stanford Intercollegiate CHAMPIONS!
A furious charge on the final day secures the first title of the season for the Sun Devils! #ForksUp pic.twitter.com/gEt2MQYo5E

“We are thrilled to win the Stanford Intercollegiate,” said Coach Missy Farr-Kaye. “We last won here in 2009. I would like to thank Dr. Condeleeza Rice for her support of this tournament. She is a great role model for our student athletes.”

Arizona State (-10/842) picks up the program’s 89th team championship since 1982, putting together their sixth-lowest score vs. par over 54 holes in school history. It was a total team effort that helped ASU earn its ninth title in the Missy Farr-Kaye era, the program’s first since capturing the 2019 Wildcat Invitational championship in March. This is the sixth overall victory for the Maroon & Gold at the Stanford Intercollegiate, their first since 2009.

For Mehaffey’s part in the win, the Banbridge star continued her consistent and clutch play, shooting an even 71 to solidify her 26th career Top-15 finish in an individual tie for 13th. Having been robbed of much of her summer’s golf at home due to injury, Mehaffey looks to be taking little time in returning to the type of form that has seen her become one of the fiercest forces in women’s world amateur golf.

Good news for ASU then who finished ahead of two Top-5 teams and six Top-10 teams, including ending five strokes in front of tournament host No. 1 Stanford. Fellow Pac-12 members No. 3 USC and No. 10 Arizona shared third place, while No. 7 Florida and No. 15 Oregon rounded out the Top-5. A total of 11 teams finished 15-over or more, an indication of how impressive the Sun Devils ten-under performance was at a tough collegiate golf course.

“The day was filled with ups and downs, but we hung in there to the finish,” Coach Farr-Kaye remarked. “I am really proud of this team and how well they persevered every day this weekend. Every person on this team made this win happen. Linn had a great week, finishing third.”

Sitting in second place and still in the hunt heading into the final day, the Sun Devils made a furious charge, carding the best round (-5/279) of the day. Arizona State took advantage of par five opportunities, leading the tournament by going 29-under with a 4.52 stroke average on those holes. They compiled 50 birdies and three eagles as a team over the three rounds.

Arizona State will enjoy a much-deserved break over the next few weeks before heading to Hawaii for the 2019 Pac-12 Preview. The tournament takes place Nov. 4-6 in Kailua Kona, Hawaii, as all 11 Pac-12 schools will compete in addition to Hawaii.