McIlroy wows the crowds with moving day 65 at Wentworth 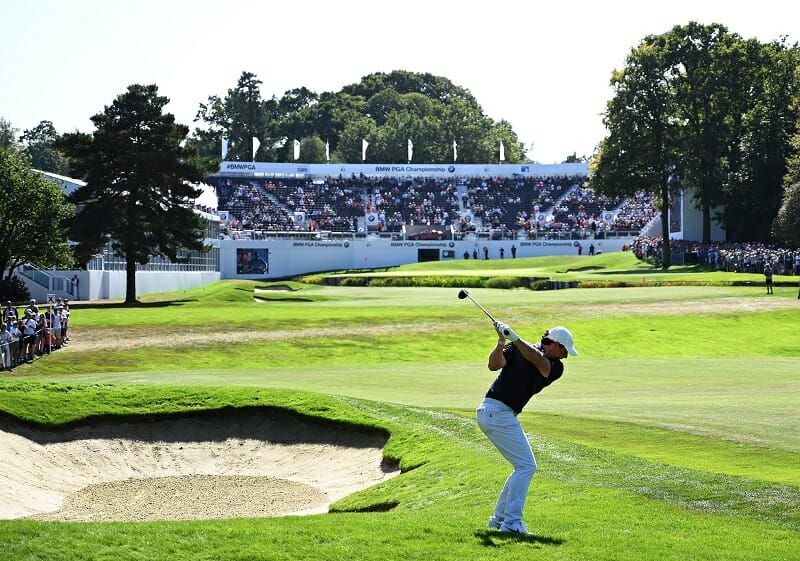 World No. 2 Rory McIlroy finally gave his strong fan base something to cheer about in posting a sizzling seven-under par 65 to take the early clubhouse lead on day three of the BMW PGA Championship at Wentworth.

McIlroy was out in the very unfamiliar second group of the morning teeing-up alongside European Ryder Cup captain, Padraig Harrington and past European No. 1 Tommy Fleetwood.

And after two indifferent opening two rounds at Tour HQ, it was a more familiar four-time Major winning McIlroy who delighted another very large following for the Irishman.

McIlroy had holed a testy, curling par putt late on day two just to make the ‘Burma Road’ cut in a round of 69 to get back to one-over for the tournament but it was this year’s three-time PGA Tour winner at his best on a sparkling Saturday morning.

Mcllroy collected a 12th hole eagle and six birdies, including three birdies in succession from the second hole, with the only hiccup being a bogey on the 16th and while he walked off with a closing hole par, the 30-year old admitted he was amazed with the turnaround in his game on day three.

“It’s amazing, I only took two weeks off but it felt like I had not played golf in years on Thursday, so it was strange,” he said.

“It has been nice to sort of figure it out a little bit, play a bit better yesterday. Obviously played much better today. It just took me a little bit to get going. It’s hard to say that you’re rusty after having two weeks off when you’ve played so much this year, but that’s seriously how it felt, and each day I just got a little bit better.

“So, it feels good. I wish I had held that putt at the last for 64. I wanted to go out today and shoot a good score.”

McIlroy was headed to an early lunch trailing five shots behind the second round clubhouse leading duo of Jon Rahm and Danny Willett but he will not know until late in the afternoon how far he trails whoever should be leading.

We do know that his biggest comeback victory was in capturing a maiden PGA Tour title at the 2010 Quail Hollow Championship when he came from nine shots back in posting a course record 62 in suburban Charlotte, North Carolina.

“I’ve got myself  back into the tournament somewhat and I think if I went out tomorrow and shot a similar score, I don’t think I’d be too far away from the winning number,” he said.

“Obviously it will depend on what the conditions are like today for the guys out there. But yeah, I did what I could. I played much better than I did the first couple days, and yeah, just feels good to hit some better shots and roll in a few putts.”

McIlroy was reminded that in capturing a first BMW PGA crown in 2014, he came from seven shots off the lead to deny fellow Irishman Shane Lowry the gleaming trophy.

“I will go out and try to shoot a similar score to what I did today and see where that leaves me. I can only do what I can. Whatever the guys do out there this afternoon, and no matter if I’m five back or seven back or ten back, my mind-set is the same.

“I’ve just  got to go out and shoot a good score tomorrow. You know, I was never thinking about winning this tournament after the first day, anyway, so I guess to put myself in a position where it’s at least a faint hope, it’s a good thing.”