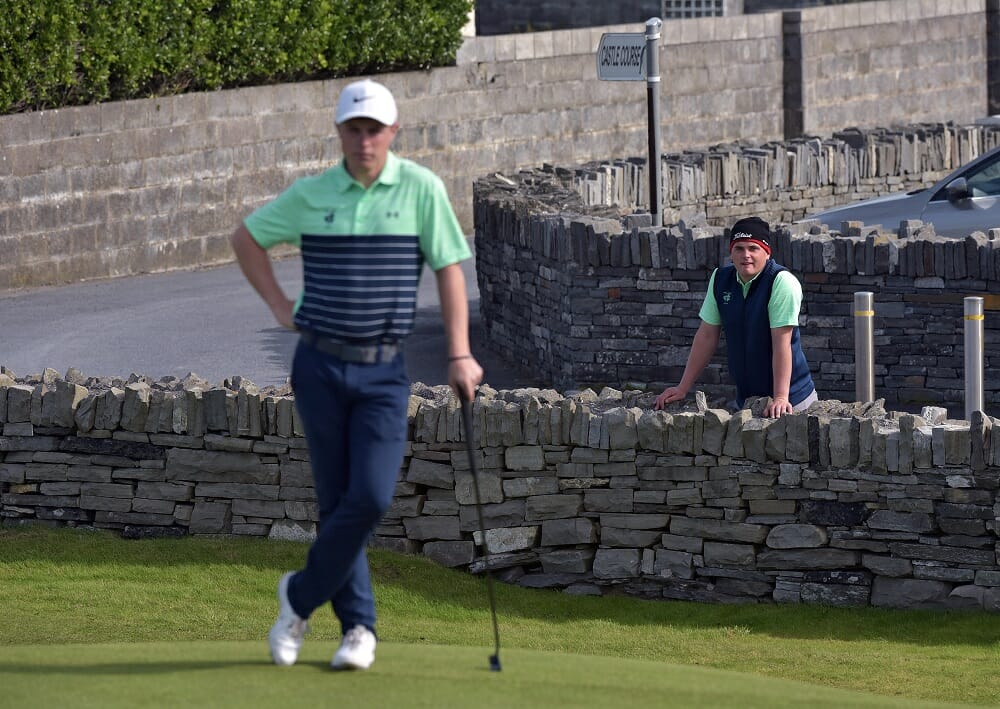 The injured James Sugrue watching Conor Purcell (Ireland) in the morning foursomes during the final day of the 2019 Home International Matches at Lahinch Golf Club today (13/09/2019). Picture by Pat Cashman

Hosts Ireland finished third following a comprehensive win (12-3) over Wales on the final day at Lahinch.

For the champions, victory was confirmed when 17 year old Ben Schmidt sealed a two-hole win against Eric McIntosh. Earlier, Bailey Gill and Joshua McMahon won 18 to halve the final match in the foursomes, ensuring the teams were tied at lunch. England’s dominance in the singles, a feature throughout the week, again propelled them to success against the Scots.

“It means everything to the team,” explained England captain Gareth Jenkins. “The strength we had in depth showed this week.”

Jenkins watched his team demolish Wales 12-3 on Wednesday before beating the hosts 10-5 in difficult conditions on day two. That win, aided by a four-point return from foursomes, put them on course for the triple crown.

“The big thing, yesterday, when the weather was so brutal our attitude was immense,” said Jenkins. “The conditions were extreme in some cases and beautiful in others. Every match was really tight at some point. And the guys dug deep. They’re great at playing for themselves but even better at playing for each other.”

Lahinch basked in sunshine throughout a glorious final day — a far cry from Thursday’s cruel mix of wind and rain. Stage set, a fine match ensued.

“This is the first time we’ve had a shot at the Homes for six or seven years,” remarked Matt Clark, Scotland’s playing captain. “Progress this week was being more competitive with the top two. We’ve given a very strong English team, certainly the best English team I’ve seen in my time playing, a real run for their money.”

Clark won two points against England. He combined with Ryan Lumsden in the foursomes and beat Ben Hutchinson 2&1 to finish the week as Scotland’s leading scorer. Matty Lamb emerged as England’s leading player with five points.

“They’re great at playing for themselves but even better at playing for each other,” Gareth Jenkins reflected. “Unfortunately we’re going to lose a lot of the players to the pro ranks. They’ve finished off their amateur careers in style this week. They’ve played some outstanding golf on a beautiful golf course.”

All but Schmidt, winner of this year’s Brabazon Trophy, are setting out on their professional careers now.

Ireland, meanwhile, ended a disappointing week with a positive performance. Leading 4-1 after foursomes, the hosts cruised to victory against Wales.

Conor Purcell (3&2), Caolan Rafferty (3&1) and Ronan Mullarney (2&1) were successful at the top of the order while Rob Brazill scorched his opponent 7&6 to push Ireland past the winning post. Further wins followed for Tom McKibbin (1 hole), Tiarnán McLarnon (4&3) and Colm Campbell (2 holes).

“Results wise, it was a disappointing week but we certainly cannot fault the way all the players went about their business,” said GUI national coach Neil Manchip.

For Campbell, there was the added satisfaction of a hole in one at the 8th.

“When I hit it, I thought it could be close,” Campbell revealed. “It was class. To do it on the final day in Lahinch, it was good. I enjoyed that one.”

As to why Ireland had fallen short overall, Campbell rued opening day defeat: “We got off to a poor start against Scotland and that just set the tone.”