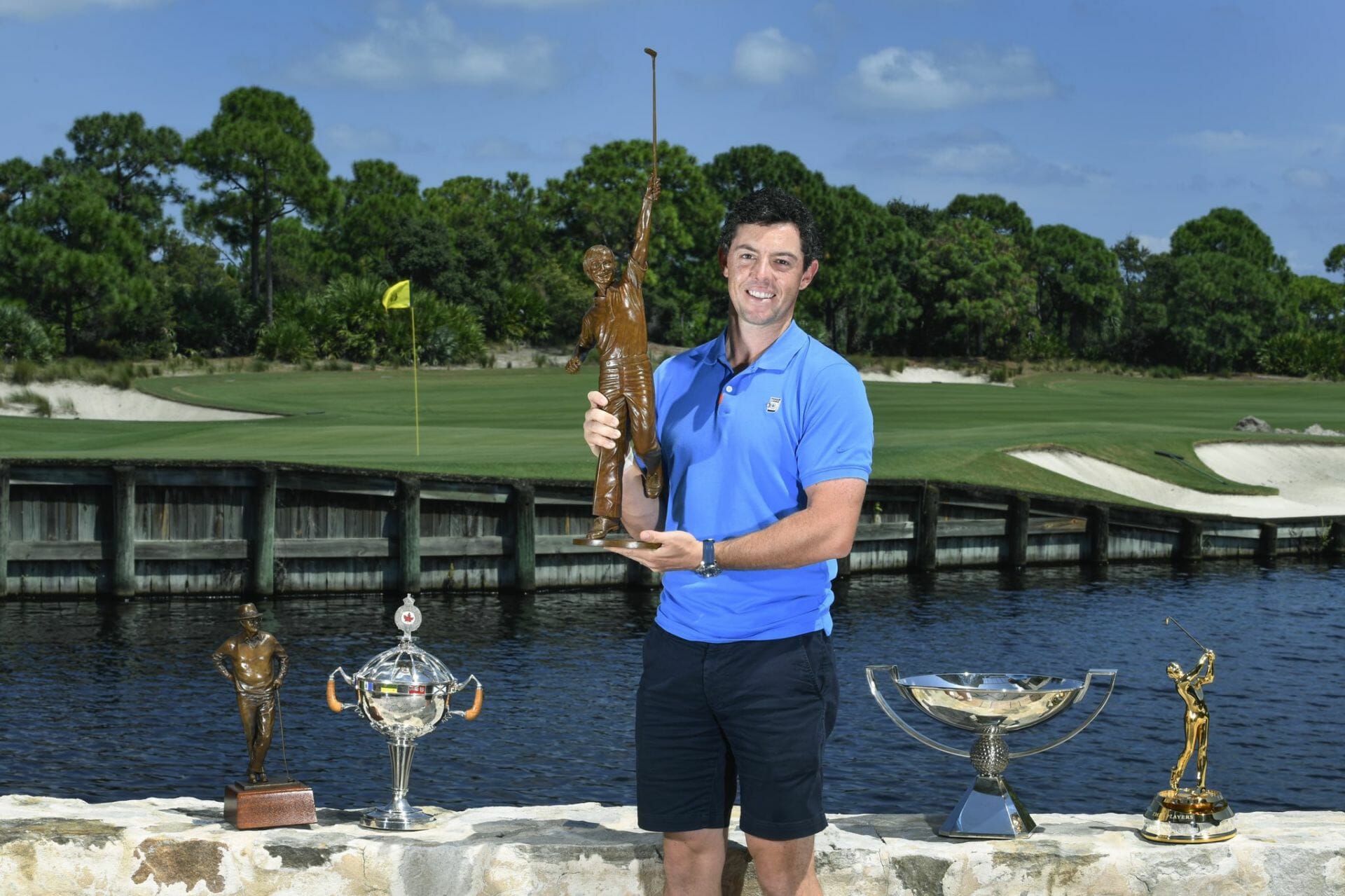 Rory McIlroy with his 2019 trophies

Rory McIlroy’s continued popularity among his PGA Tour peers has been rewarded for a third time in his career with the 2019 Tour ‘Player of the Year’ award.

The 30-year old Ulsterman was given the majority vote in upstaging arch-rival Brooks Koepka to again receive the Jack Nicklaus medal after being voted ‘No. 1’ in 2012 and 2014.

And in a huge surprise for McIlroy, it was the 18-time Major-winning Nicklaus who delivered the news to McIlroy.  The two were sitting together when the trophy was placed on their table.

“I’ve already got two of those,” said McIlroy. Nicklaus responded:  “Well, you have three now! Congratulations.”

McIlroy, clearly taken aback by the award, then reached over to shake Nicklaus’ hand declaring: “I have goosebumps.”

“I couldn’t be more proud of what I’ve achieved this year,” said McIlroy.

“I wanted to try and bring my best every single week that I played and I feel like I did that to the best of my ability, and I feel like the Top-10s, the consistency, the work that I’ve put in, I think that the greatest compliment you receive is that your peers feel like you’ve done something pretty special and for this award to be voted on by my fellow players, I’m very humbled and very honoured.

“I think it says a lot about what I’ve put into this year and it validates some of the decisions that I’ve made starting off the year, and you know, I couldn’t be more proud to win this award for the third time.

It had been widely expected by many observers that Koepka would win the award given he captured a third and a fourth Major in 2019 with his PGA Championship and U.S. Open triumphs along with victory in a Sunday head-to-head battle with McIlroy for the WGC – Fedex St. Jude Invitational in Memphis.

But then it would also seem there are many within the PGA Tour ranks who don’t warm as well as they do to McIlroy, and this is clearly also reflected in Koepka’s ‘Mr. Cold’ attitude with golf fans.

“I thought maybe Brooks winning the PGA Championship this year was going to be the difference-maker,” McIlroy admitted, before saying, “but you know, the other players thought differently and I’m very honoured that they thought enough of my season to give me this award.”

With three wins on the season (The Players, RBC Canadian Open, Tour Championship), McIlroy matched Koepka for much of the season, but when it came to popularity, McIlroy came out tops.

“While there are a number of honours one can receive in this game, PGA Tour Player of the Year has to be among the most satisfying as it comes directly from his peers,” said PGA Tour Commissioner, Jay Monahan.

“Rory’s season was a model of consistency punctuated by milestone victories and ultimately the FedExCup in Atlanta.”