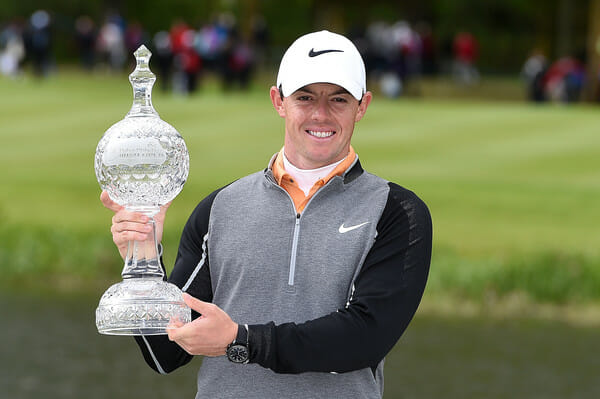 In great news for Irish golf, the PGA Tour player of 2019, Rory McIlroy has suggested that he’ll return to play in the Irish Open in 2020.

The four-time Major winner was widely scalded for opting out of this year’s renewal that was hosted to grand acclaim by Paul McGinley at Lahinch.

The Holywood star believed that it was in the best interests of his Major ambitions to skip the County Clare assignment and instead travel to Scotland ahead of the historic 148th Open Championship at Royal Portrush.

Although his Major preparations fell some way short on a disastrous opening day at the Dunluce Links in July, McIlroy insists his approach to his schedule was justified in a new-found level of consistency that culminated in 14 top-10 finishes, a FedExCup triumph and his winning of the 2019 PGA Tour Player of the Year award.

Which naturally begged the question – would he be repeating the winning formula next year?

The answer was unequivocal, however a mooted date change for next year’s Irish Open means there’s more than a little hope that we will see one of the best players on the planet return to Irish shores next season.

“Yeah, I mean, I’m definitely going to repeat what I did this year,” McIlroy said. “Again, I think that winning the FedExCup, winning the PGA Tour Player of the Year, it’s validation of what I decided to do at the start of this year, which was focus a lot of my efforts in the United States and on the PGA Tour for the first seven or eight months of the year.

“But yeah, again, I’ll start, I’ll focus my efforts on the PGA Tour in the United States for at least the first half of the year.”

All that’s left is for the worst kept secret in golf to become public and a May date to be confirmed for our National Open. The week of the 25th is believed to be most likely and although there’s plenty of talk surrounding a certain course in line to take on hosting duties next year, the success of that tournament, whether we like it or not, would only be heightened with a fit and raring to go, Rory McIlroy in the field.