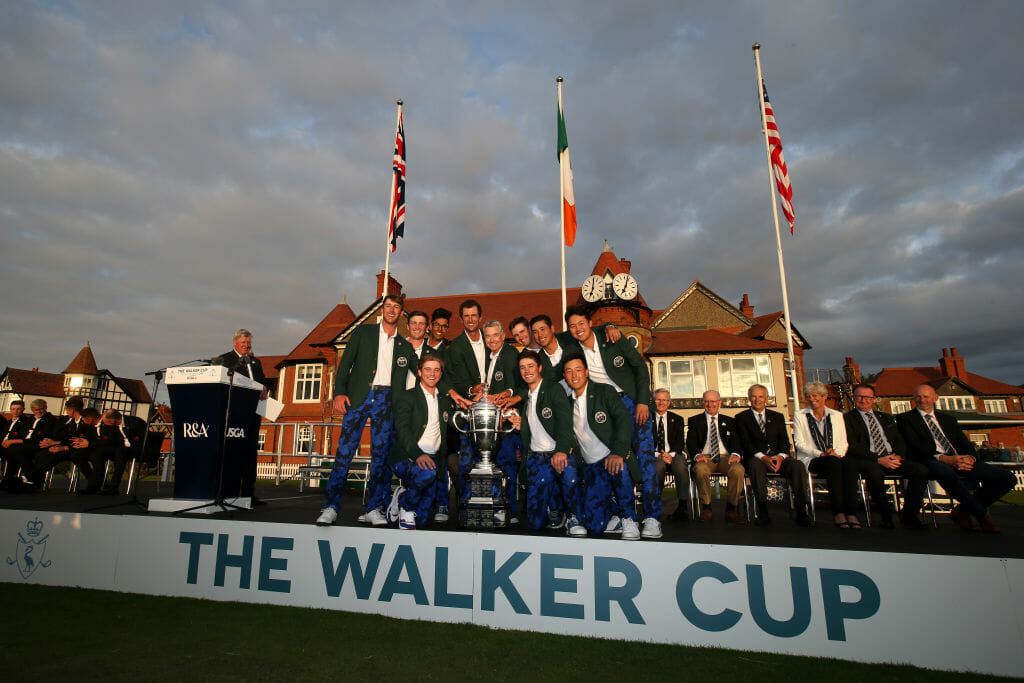 The United States team pose with The Walker Cup following the singles matches during Day 2 of the Walker Cup at Royal Liverpool Golf Club. (Photo by Jan Kruger/R&A/R&A via Getty Images)

It was an afternoon to forget for GB&I as they fell to an on-form USA side in the final session of the 2019 Walker Cup.  The weather in Royal Liverpool was benign again, despite the local hopes that the wind would blow on the second day.

Nearly 11,000 fans flocked to Hoylake over the two-day match which ended with the USA winning the Walker Cup away from home for the first time since 2007 at Royal County Down.

GB&I had a one point lead going into the ten singles matches, but the signs were ominous after less than an hour’s play. The scoreboard turned a distinct shade of red with the US team leading in eight of the ten matches.

Although many of the GB&I golfers staged mini comebacks, the US weren’t to be caught; the holders ended up winning all eight.  Sandy Scott and Tom Sloman managed to pick up consolation wins for GB&I in what was a disappointing final result for the team and captain Craig Watson.

“Obviously the boys are disappointed,” said Watson. “It didn’t go quite to plan but they can be proud of their achievements to get in the team first of all and of their performance this weekend. I’m proud of all of them.”

Naturally, the mood was quite the opposite in the USA camp after a remarkable Sunday session.

“I honestly thought that these guys would let their talent come to the surface,” said USA Captain, Nathaniel Crosby.

“I liked the idea that the wind was laying down a little bit this afternoon but these guys have been over here for seven or eight days. The singles were amazing. The guys played great.

“These guys are inseparable and they’ve got a great memory now. This Walker Cup experience is going to be a memory and a winning memory at that.”

Caolan Rafferty, James Sugrue and Conor Purcell all lost in a disappointing day for the Irish golfers and the large crowd of travelling supporters.

Portmarnock’s Purcell lost on the 13th, Mallow’s Sugrue lost on the 16th and Dundalk’s Rafferty lost on the 18th in what was a surprising and unexpected run of results.

Sugrue and Rafferty were again rested for the foursomes; Sugrue’s ongoing back “tweak” meaning that he effectively ruled himself and his foursomes partner out.

Purcell was out in the morning foursomes, he partnered Alex Fitzpatrick, younger brother of European Tour star Matt, but the pair lost on the 17th.

The Irish trio will need to move on quickly. They’re in action at the Home Internationals which tee off in Lahinch on Wednesday.

For full scoring and this afternoon’s draw, click HERE

Sandy Scott vs. Andy Ogletree (GB&I wins by one hole)

James Sugrue vs. John Pak (USA wins by one hole)