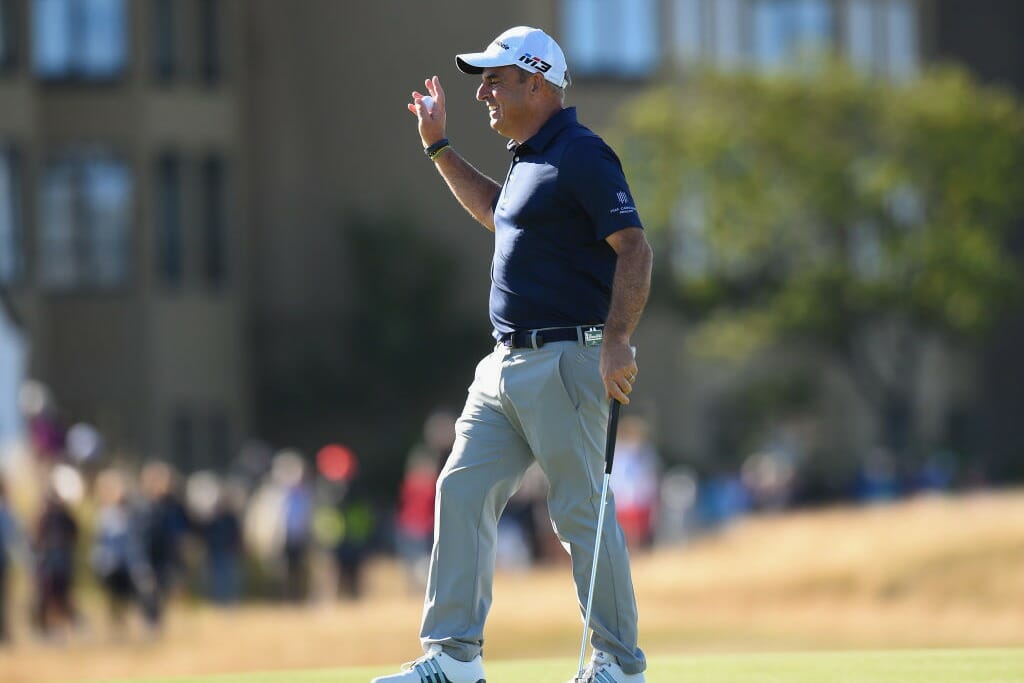 Paul McGinley proved he can still back up his SkySports punditry with some solid play as he moved inside the top-10 at the Staysure PGA Seniors Championship at the halfway point.

The Dubliner is just five shots behind the leaders after firing a second successive three-under par round of 69 at London Golf Club.

The former Ryder Cup Captain made the turn in a blemish-free three-under par 33 before consecutive bogeys at 11 and 12 halted his progress on the leaderboard.

However, McGinley displayed immense bounce back ability to register an eagle at the lucky 13th to move back to six-under par for the championship ahead of an exciting weekend.

He won’t be the only tricolour to feature in the scoring charts on moving day either after Des Smyth rolled back the years with a stunning bogey-free 67 to bolt 40 places up the leaderboard.

Smyth carded an eagle and three birdies to move to minus-two for the tournament, brilliantly recovering from an opening day 75 to comfortably make the cut.

Mark McNulty was the only other Irish player to advance to moving day after adding an even par round to his 71 on Thursday to sit just outside the top-40 at minus one.

Peter Lonard and Phillip Price are the men to catch at the halfway stage in London.

The Australian, who is making his first Staysure Tour appearance outside of the Senior Majors, recorded an eight-under par round of 64, one shot away from course-record, to top the leaderboard ahead of compatriot and overnight leader David McKenzie early on day two.

However, Welshman Price made six birdies on his back nine to sign for a round of 66 to separate the Aussie pair and join Lonard at the top of the leaderboard at the halfway stage of the championship.

Lonard, a winner on the US PGA Tour in 2005, carded a bogey-free front nine, making the turn at four under par, before returning to the clubhouse in 32 strokes, which included three birdies in his final four holes with a final gain coming on the 18th hole.

With nine birdies and only one dropped shot to follow his opening round of 69, Lonard was delighted with his work on day two at the European Tour Destinations venue.

“It was quite enjoyable for once,” he said. “Yesterday I got a little lucky and shot three under but didn’t really play that well. Today I drove it on the fairways which gave me a lot of chances and I played pretty well.

“I hit all the greens on the front nine. I was putting really well and holed a couple of putts. On the back nine I only missed one green and didn’t get up-and-down, which was a bit disappointing, but I holed some good putts when I needed to. The course is as benign as it was going to be today, so I figured it was possible to shoot a good score.

“All of us have been around the block for a long time and we know there is a long way to go. We’re all good mates and some of the European Tour guys I met 30 plus years ago.

“It’s a great opportunity this week to; number one – play, number two – play for some money, and number three – catch up with some of the guys I’ve known for years.”

Price has finished inside the top ten on five occasions this year, including a runner-up result in Switzerland, and his second round of 66 gave him the chance to be in the mix once again.

“I’m very pleased with today,” he said. “I was a bit quiet on the front side and went out level par and things weren’t really happening, but to shoot six under on the back side was great.

“I hope I can be in the hunt and give myself a chance and hopefully at the right time I start to play properly on the last day and shoot a good enough score.”

A shot behind the pair is McKenzie who continued his form from the opening round with a three under par round of 69, to remain in touch with his fellow countryman and Price. While PGA professional Tim Milford recorded a stunning round of 65, seven under par, to sit three strokes off the lead in a share of third place alongside recent WINSTONgolf Senior Open champion Clark Dennis.

The third round begins at 8:30am local time with the leading pair teeing off at midday.