It’s Official! The 2026 Ryder Cup is coming to Ireland 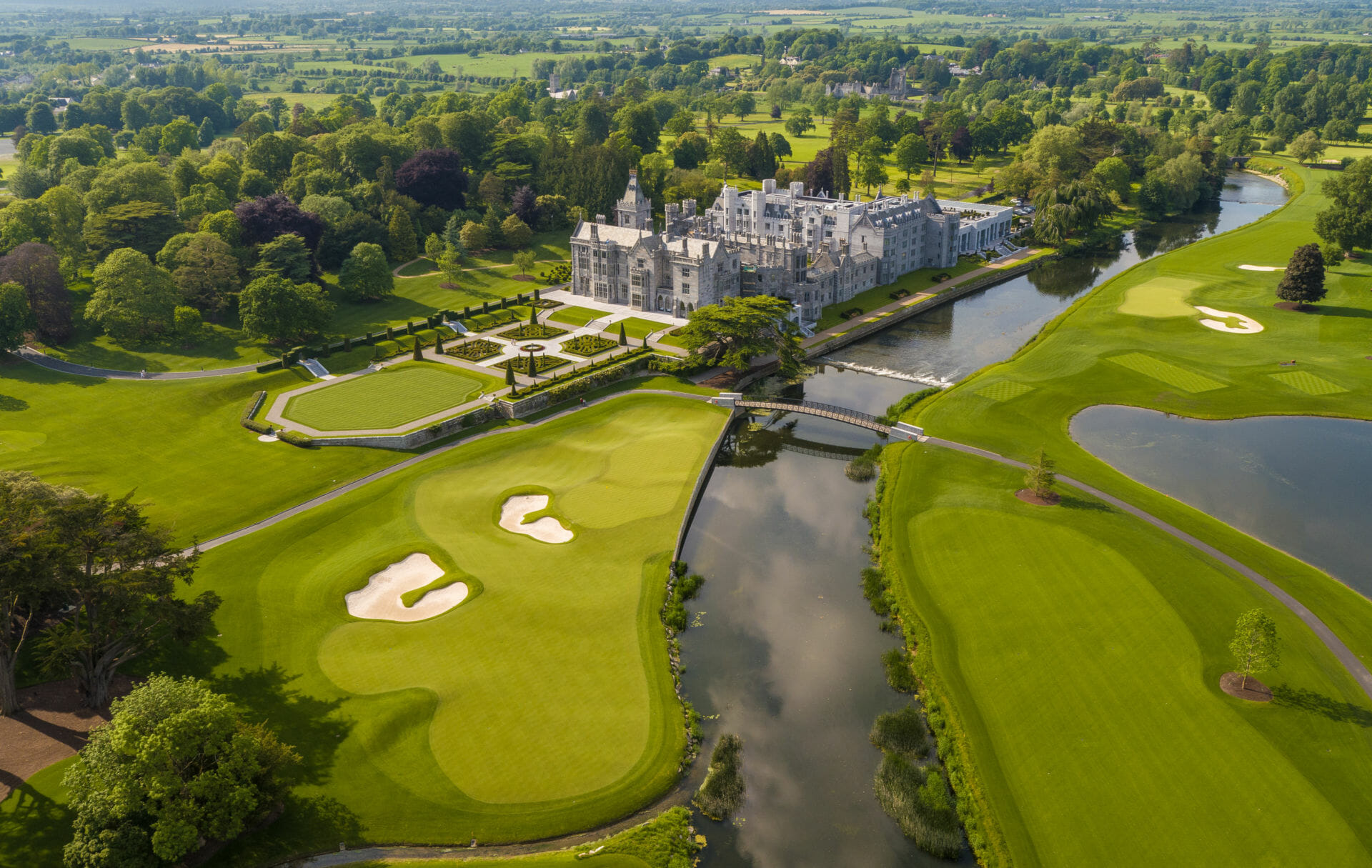 The Ryder Cup will return to Ireland in 2026 when Adare Manor, in County Limerick, hosts the biennial contest between Europe and the United States for the first time.

Ryder Cup Europe – which comprises the Managing Partner the European Tour, the Founding Partner the PGA of Great Britain and Ireland, and the PGAs of Europe – today announced the five-star resort will follow in the footsteps of Whistling Straits in Wisconsin (2020), Marco Simone in Italy (2022) and Bethpage Black in New York (2024) as the venue for golf’s greatest team contest.

It means The Ryder Cup will be staged in Ireland for the second time, 20 years after The K Club hosted the 2006 contest when Team Europe – under the captaincy of Ian Woosnam and featuring three Irishmen who would go on to captain Europe over the next decade; Darren Clarke, Padraig Harrington and Paul McGinley – memorably defeated the United States by a record margin of 18½ – 9½.

Guy Kinnings, European Ryder Cup Director, said: “We are delighted to announce The 2026 Ryder Cup will be staged in Ireland at Adare Manor which is a world class venue, both in terms of the golf course and the wider resort facilities.

“Today’s announcement would not have been possible without the support of An Taoiseach Leo Varadkar and the Irish Government who are in receipt of our grateful and heartfelt thanks. Months of careful negotiation behind the scenes have seen us arrive at this point and we could not be happier to be able to take golf’s greatest team contest back to Ireland.

“Equally in receipt of our appreciation are Adare Manor owners JP and Noreen McManus and their entire team at the magnificent County Limerick venue. JP has shown unwavering support for golf and the European Tour over many years and we are delighted that Adare Manor will be the venue to showcase the next chapter in Ireland’s Ryder Cup story in seven years’ time.

“Aside from having provided three Captains over the past four editions, in addition to world-class talent such as Rory McIlroy, Irish players such as the late Christy O’Connor Jnr, Philip Walton, Eamonn Darcy, Graeme McDowell and Paul McGinley are intrinsically linked with providing Europe’s winning moments over the years.

“Added to that the fact that Irish golf fans are rightly recognised as some of the most knowledgeable and passionate in the world, as was shown during Shane Lowry’s emotional Open Championship triumph at Royal Portrush on Sunday, there was no question in our minds that the time was right.”

Keith Pelley, Chief Executive of the European Tour, said: “This is a tremendously proud day for everyone at the European Tour and everyone associated with the island of Ireland and Irish golf. When we started the discussions with both the Irish Government and Adare Manor on this entire project they promised to deliver, and they have both done that today.

“Over the past few weeks we have seen truly wonderful golfing occasions at both Lahinch and Royal Portrush and I know such memorable scenes will be repeated in seven years’ time at Adare Manor. Ireland has golf in its DNA and especially in relation to The Ryder Cup.”

Taoiseach, Leo Varadkar T.D. welcomed the announcement stating: “I am delighted that Ireland will be the host of The Ryder Cup in 2026. It is great news for Ireland, and for County Limerick and the west of Ireland in particular.

“This news comes at the end of an historic week for golf on the island of Ireland, following the hugely successful hosting of the Open Championship by Royal Portrush Golf Club, and the historic victory by one of Ireland’s most popular sporting heroes, Shane Lowry.

“Shane’s victory is one of many great achievements by Irish golfers, not just in Major Championships but also in The Ryder Cup. Over the years, Irish captains and Irish players have played a huge role in the success of the European team.

“I am sure that when The Ryder Cup comes to Adare, we will see many more great sporting memories created, and great sporting friendships forged. It will be a fantastic occasion for everyone on the island of Ireland, and for the many visitors from both sides of the Atlantic who can look forward to another great Irish welcome.”

Commenting on the announcement, the Minister for Transport, Tourism and Sport, Shane Ross T.D. stated: “The passion of Irish people for golf across the island is well known and that was reinforced by the fantastic crowds at last Sunday’s Open Championship in Portrush and the joy at Shane’s great victory. Hosting The Ryder Cup here will be a great occasion for Irish golf and Irish tourism. The Ryder Cup in 2026 will be a must go event for golf fans when we expect thousands of overseas visitors to come to Ireland.”

The news was further welcomed by Minister of State for Tourism and Sport, Brendan Griffin, T.D. who stated: “It’s been a fantastic week for golf in Ireland following Shane Lowry’s heroic win in Portrush. The announcement of The Ryder Cup for Ireland in 2026 is further great news and is a wonderful honour for all of us in Ireland, North and South. It’s a special honour for the people of Munster, a province steeped in sporting culture, where this marvellous global event will be embraced by the people to make 2026 the greatest ever tournament in the history of The Ryder Cup.”

JP McManus, owner of Adare Manor, said: “I am delighted that the prestigious Ryder Cup will return to Ireland. We were very happy that Adare Manor was chosen as the venue for this world renowned tournament in 2026 and we look forward to welcoming our worldwide visitors.

“It is a wonderful tribute to the many great Irish golf ambassadors and success stories Ireland has had in golf over the years and a nice follow on from Shane’s momentous Open win on Sunday in Portrush. The nation was behind Shane, it was a great achievement and very well deserved.

“I am confident that the people of Ireland will get behind The Ryder Cup and take the opportunity to showcase Ireland on the world stage and ensure that The 2026 Ryder Cup will be an outstanding success.

“I hope the many tourist, golfing and business organisations will work together to identify all the opportunities for the benefit of The Ryder Cup, the Irish economy and across the south west community.”

Since Ireland last hosted The Ryder Cup in 2006, the biennial contest has extended its reach as one of the world’s leading sporting events.

Last year’s Ryder Cup at Le Golf National in France attracted more than 270,000 fans on course across the week – the largest attendance for a Ryder Cup held in Europe – with record social media engagement of more than 22 billion impressions globally.

The Ryder Cup also boosted economic activity in France by €235.7million – a significant increase compared to the £106 million of economic activity generated in Scotland in 2014 when Gleneagles hosted the contest.

Adare Manor, which was extensively renovated two years ago, hosted the Irish Open in 2007, a tournament won by Padraig Harrington two months before he went on to clinch the first of his two successive Open Championship titles at Carnoustie. The Irish Open was staged again at Adare Manor the following year in 2008 when Englishman Richard Finch triumphed.

The venue has also hosted the JP McManus Pro-Am in 2005 and 2010 and is scheduled to do so again next July, with confirmed participants already including Padraig Harrington, Rory McIlroy, Phil Mickelson, Jon Rahm, Justin Rose and Tiger Woods.