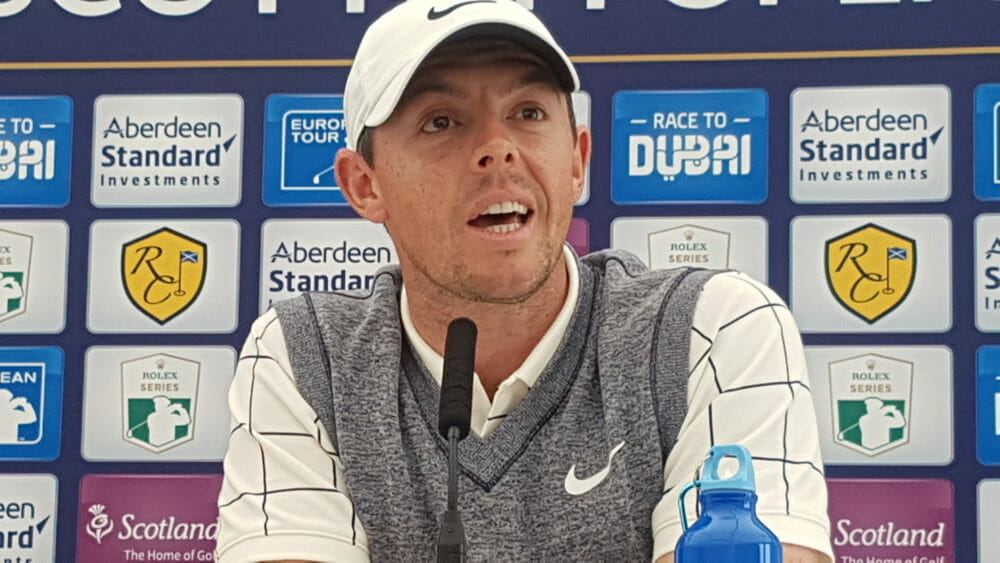 Fourteen years after spectacularly shooting the lights out in posting a 61 at Royal Portrush, Rory McIlroy returns next week declaring ‘it’s still the same golf course’.

While McIlroy drew much controversy in skipping last week’s Dubai Duty Free Irish Open at Lahinch, there’s no such argument this week with the current World No. 3 featuring prominently, as you would expect, on Scottish Open billboards, posters and programmes.

McIlroy is yet to win a Scottish Open, coming closest when posting a new course record 64 on the opening day of the event in 2014 at Royal Aberdeen on route to a top-20 finish.

McIlroy’s only played the event on a few occasions with the last being in 2017 when he missed the cut at Dundonald.

And while being respectful to this week’s second straight Rolex Series tournament, there was no avoiding questions regarding next week’s Open, with the now 30-year old level-headed in his opinion of what he experienced last Saturday.

“I was saying to someone yesterday, I expected it to feel different than it did. It still just feels like Portrush to me,” said McIlroy.

“Yes, the stands are up and it looks fantastic, but it’s still the same golf course. It’s still — I haven’t played it much over the last few years.

“We played the Irish Open there in 2012. I did play 18 holes in October so, I was sort of a little, do I really need to re-familiarise myself with this place; how much time do I need to spend.

“When I got on the first tee, everything sort of started coming back to me.

“Then on the second tee, I aim it at the brown house, the fourth — everything started to come back. It felt like just the same old golf course that I grew up playing and it was nice.

“Also, I had not seen my Mum in three months as she left after Augusta to come back home. I made arrangements to go to dinner with them and I said, can we have it at about 8.00 because I don’t know how much time I’m going to have to spend at Portrush and sort of just get my bearings, and I ended up moving the dinner forward because, you know, I was out there for — I didn’t needed to spend as much as time as I thought I did, which I guess is a comforting thing in a way. It was great to see it.

“So, it’s been a long time in the making and obviously everyone over there is so excited for next week.”

With confirmation from the R&A that 70% of the spectator tickets have been bought by those living in Ireland, McIlroy was asked how does he prepare for the ‘hype’ surrounding the return of golf’s oldest major to the Co. Antrim course for a first occasion in 68-years.

“I guess it’s the same golf course I’ve grown up playing my whole life, and it’s the same tournament that I haven’t finished outside the top five for the last few years,” he said.