This should have been RBC Heritage week and one of the more-popular Tour destinations on the schedule.

It’s a week everyone looks forward, especially following the drama and stress of the Masters with players, caddies, officials and fans very much enjoying the relaxed vacation setting at Hilton Head.

The only real concern is not speeding along highway 278, the most direct route from Augusta to Hilton Head.  It’s around a 135-mile, leisurely two-and-a-half-hour drive south-east through very sleepy towns and the lazy-looking Georgia countryside.

Though don’t say that to the Ryder Cup captaincy duo of Jose Maria Olazabal and Padraig Harrington.

Olazabal was arrested in 2012 after being clocked doing 97mph in a 35mph zone of a small town, and then asked to escort the police car back to the Sheriff’s office where he was fined $621, two days after missing the Masters cut.

Harrington gave this journalist grief when he had mentioned to me at Hilton Head he’d been given an on the spot speeding fine en-route and I went and reported it with a lead sentence something to the effect:  “One of golf’s slowest players gets booked for speeding”.

Seven years ago in 2013, Graeme McDowell ended a three-year PGA Tour victory drought in winning the RBC Heritage at Hilton Head however it was not all plain sailing for GMac.

It had emerged at the time of McDowell’s victory press conference that his mother got herself lost on the Monday ahead of the event and ended-up being rescued by a life guard on a Hilton Head beach.

Scott Ohlson spends his summer holidays as one of five full-time beach patrol officers on the beaches of Hilton Head Island in South Carolina and was doing his rounds when he got a radio call to say a woman had been missing for three hours. The woman turned out to be Marion McDowell, mum of the 2010 US Open champion, who got lost trying to find her son’s rented beach-front dwelling.

She told Ohlson she had arrived at Hilton Head late on Saturday night, and with it being very dark the only thing she knew was that her son’s address had the house number 38.

Hilton Head is a maze of similar looking streets and it’s not uncommon for even the pros, and also journo’s, to get lost in trying to find the tournament course or their residences.

“At 10pm, all the lights on Hilton Head are turned off during turtle nesting season, so this probably led to her initial confusion,” said Ohlson.

“I had a map of the beach-front home so we drove along the beach, trying to find the right house with a 38 in the address.”

After finding the house and dropping her off, Ohlson then received a call from his manager to advise the woman was McDowell’s mother, and to make sure she had been reunited with the family as the house’s call-back number wasn’t working.

Ohlson rushed back to house and knocked on the door to be greeted by McDowell’s then fiancée, Kristin Stape and then McDowell.

“It took me a second to realise who McDowell was,” said Ohlson.

Both expressed thanks to Ohlson given the stress McDowell’s mum endured and also when he had first met her, she was some three miles from the rented house.

McDowell then organised full clubhouse tickets for Ohlson along with his father, Ken and mother, Keri and they attended all four days of the event on the Harbor Town course.

Ohlson was at the back of the 18th green to witness McDowell capture his first regular PGA Tour event in defeating fellow US Open winner, Webb Simpson and then invited to sit in on McDowell’s post round press conference and afterwards got a photograph with the new RBC Heritage Champion, along with McDowell signing his tournament pass with the words:  “Scott.  Thanks for rescuing my mom!  All my best, Graeme McDowell.”

He gave McDowell his business card and the pair promised to catch-up the following year for McDowell’s defence.

Images below courtesy of @Tourmiss 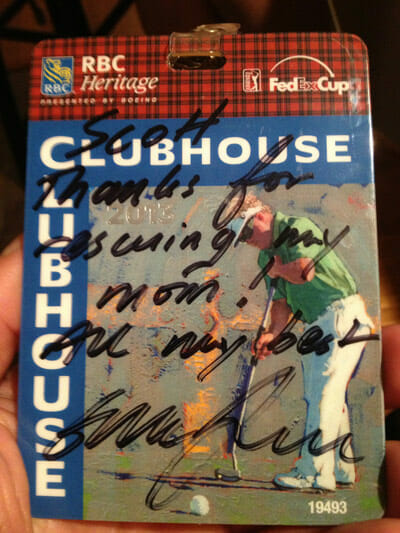 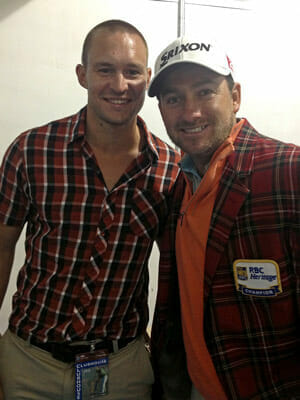