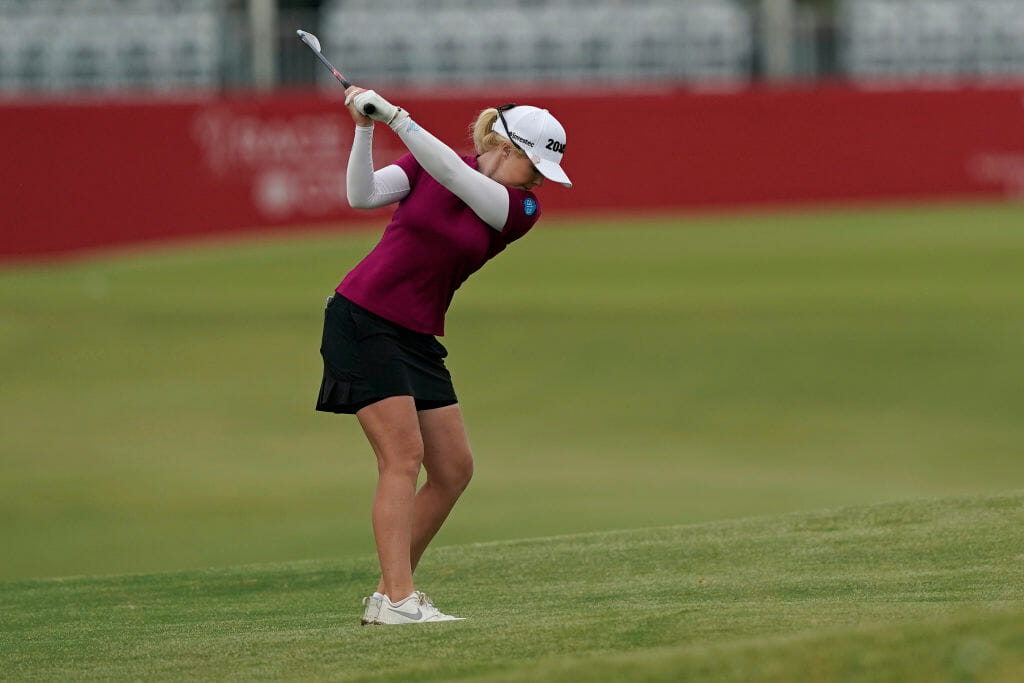 You can’t win the tournament on day two but you can certainly lose it and following her first round heroics where she topped the leaderboard on 8-under par, day two was a day for consolidation for Stephanie Meadow where she dug deep to return a level par round, keeping her in the mix at the Volunteers Classic.

Starting on the back nine, Meadow carded eight pars and a solitary birdie before the turn and she showed her true mettle when she bogeyed the 3rd, 5th and 7th on the way home but bounced back with birdies on the 4th and 6th which see her in sitting in solo fourth place heading to round three.

“I know I can win, I did it on Symetra and I did it in Ireland a couple weeks ago,” Meadow said. “I know I can handle myself. Yeah, this might be a bigger stage, but I know I can still do it. It’s the same concept. So, I’m excited for the weekend. I can’t wait to get started.”

One of the big movers on day two was Cheyenne Knight who took a share of the lead into the weekend in her home LPGA Tour event.

A two-time Texas state high school champion at Aledo, just west of Fort Worth, Knight shot a 4-under 67 to join Alena Sharp and Brittany Altomare atop of the leaderboard.

“It’s incredible,” Knight said. “I know they’re going to cheer for me if I make a birdie or if I make a bogey, and just having all my family and friends here, it means a lot just having that support because I don’t get to play close to home very often. So just seeing them smiling and cheering me on is definitely a little advantage.”

Sharp closed with a bogey on the par-4 18th for a 65, and Altomare had a 66 to reach 9-under 133 at Old American Golf Club. The three leaders are winless on the LPGA Tour.

Knight had six birdies and two bogeys in the second round. Likely playing her final event of her rookie season on the tour, the 22-year-old former University of Alabama is 120th on the money list, with the final top 100 keeping their tour cards for next year.

“If I ever get nervous or uncomfortable, I’m like, ‘I have everything to gain, nothing to lose.’ I know I need a top finish and that’s what I’m trying to do,” Knight said. “I’m just trying to play one shot at a time. There’s 36 more holes and if I have a bogey or something, I have plenty of golf left. I know I need a high finish to avoid going back to Q-School, so I’m just putting my foot on the gas.”

Altomare had her second straight bogey-free round.

“I hit the ball really well,” Altomare said. “I gave myself some really close opportunities and I was lucky enough to make them. I was putting well and I just didn’t make any mistakes, which was really nice.”

Sharp eagled the par-5 sixth. The 38-year-old Canadian was 5 under in a six-hole stretch on the front nine.

“I played solidly, drove it really well,” Sharp said. “I think you have to do that here. There’s some bunkers you need to avoid, be smart off the tee. ”