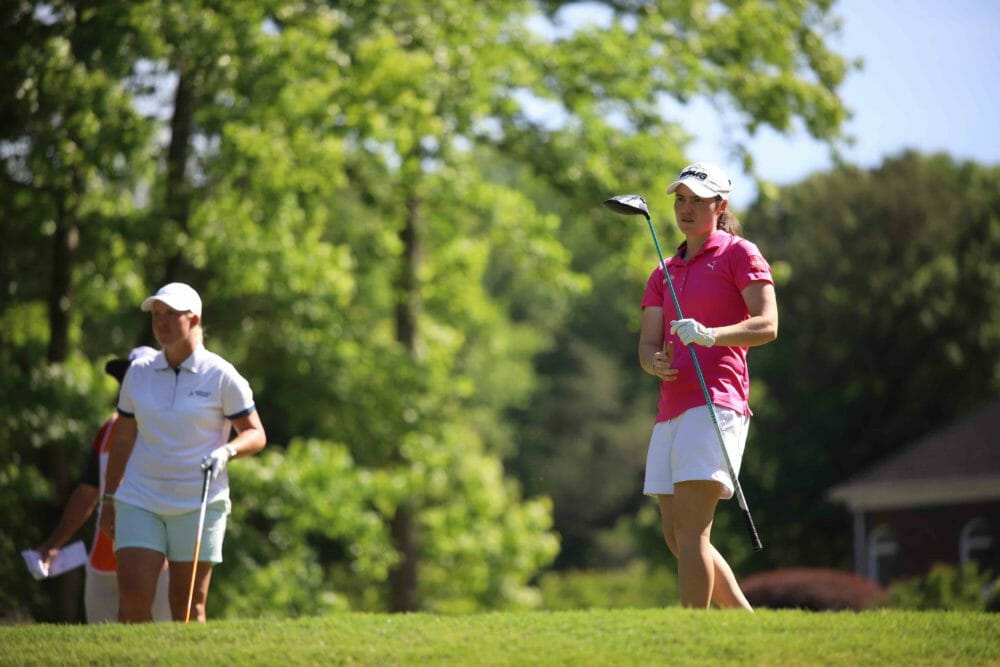 Leona Maguire will enter the final round tied for the lead as she continued to strut her stuff on day two of the eighth annual Symetra Classic at River Run Country Club.

The former world amateur number one bounced back from a bogey at her opening hole, the par-4 10th, with birdies at 12 and 14 and was trending nicely until a bogey at the par-3 17th threatened her momentum.

“I keep putting myself in these positions which is always a good thing,” said Maguire, who captured the Windsor Golf Classic title in early April. “Made a charge last week in the final round. Hopefully I’ll be a little closer and I’m feeling pretty comfortable back here in North Carolina, pretty similar to the courses we played in college. Trying to keep myself under the hole because these greens are slick.”

Maguire battled to a 3-under par performance in the second round, which included a string of three straight birdies on the front nine and later today, she’ll make her second appearance in a final pairing this year.

“I’m really looking forward to teeing it up again in the last group,” Maguire said. “I’m feeling comfortable and in familiar territory this week, drawing on my experience of playing college golf in North Carolina. I’ll try to give myself as many chances tomorrow and hopefully some putts drop.”

Maguire, who picked up her maiden professional win on the Symetra last month, soon showed all her class however, as she picked up three successive gains around the turn at 2, 3 and 4 before parring home for a three-under par 69.

The Cavan professional’s consistency over the first two days was reflected in her stats as she averaged 265 yards off the tee, finding 10 of 14 fairways and 14 greens in reg whilst again needing 29 putts on her way to the clubhouse.

After compiling four straight top-5 finishes in recent weeks, Maguire looks odds-on to add a fifth to that tally but she’ll only have eyes for the top prize despite sharing the overnight lead with Australia’s Stephanie Na, South Korea’s Eun Jeong Seong and Spain’s Fatima Fernandez Cano atop the board at five-under par.