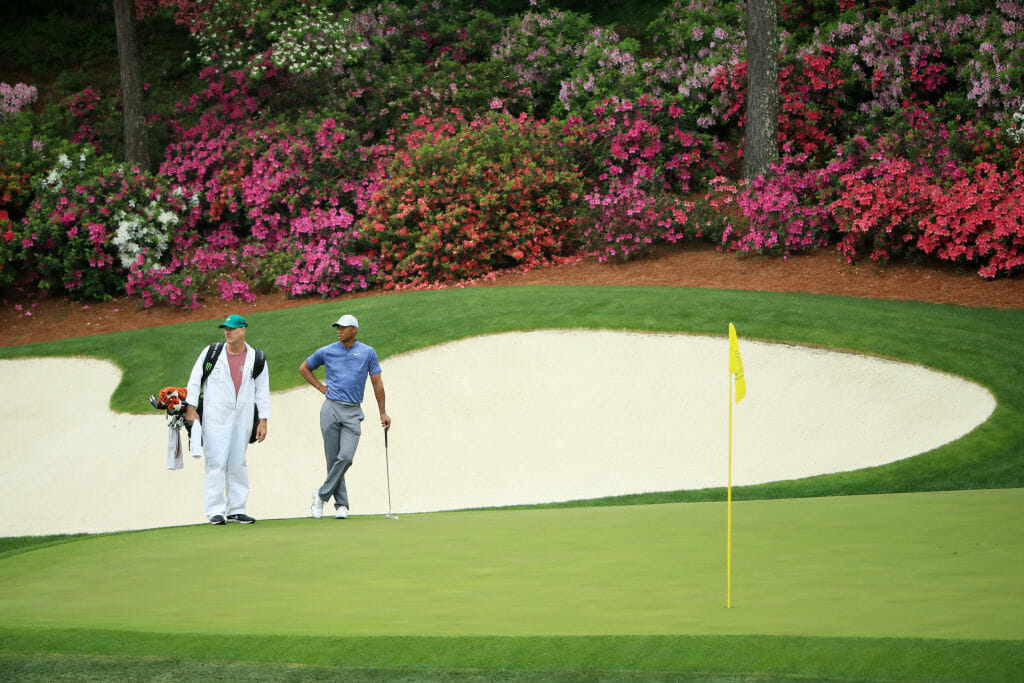 And from what Harrington witnessed at Augusta, Europe’s Ryder Cup captain can see no stopping Woods in his quest to break Jack’s 18-Major haul.

“Tiger was not the fuzzy Tiger this past week as he wasn’t being nice to people, he wasn’t smiling or chatting and it was business as usual,” said Harrington.

“There was a flow about him going around the place and you knew Tiger was coming and you could sense that, and he carried that all the way through.

“His win is remarkable. We have been asked about this for years and that is whether Tiger can win another event and a lot of pros said ‘no’ and even if you did say ‘yes’, you were really thinking in your head that you were just being polite.

“The main thing, and what I saw out there in that final round, is that when he got himself into contention, Tiger just wanted to get the job done.”

Woods’ fifth Masters victory has seen him jump to No. 6 on the World Rankings and a far cry from early 2017 when he’d slumped as low as 674th in the world.

Woods 81st PGA Tour-counting success puts him just one adrift of Sam Snead’s all-time record while Tiger’s been installed as 6/1 favourite to win next month’s PGA Championship at Bethpage, the Long Island golfing gem where Woods won the 2002 US Open.

Harrington agrees with the bookies that there might be no stopping Woods after his latest breakthrough win.

“When you look at Tiger’s game, there was times where, like all players, he wanted to hit the right shot, the perfect shot and the shot with the nice swing.

“He’s not comfortable hitting the draw so when he gets into a draw mode he wants to be able to prove he can do it but when he got himself into contention, he just kept hitting that fade and the shot he knew he could play.

“That is when Tiger is at his most dangerous.

“It’s just amazing as where he was three to four years ago; carrying all his injuries, the different run-ins, being stopped by the police and also under the scrutiny is incredible.

“It’s not like he could do all this in a quiet place and then come back to golf. Everybody continued to be focussed on what he was doing and it’s very hard to make any comeback when you are in the spotlight.”

The sports world observed last Sunday yet again, Woods’ mental strength. He didn’t capture a 15th Major with the blistering physical power of a charging final day 64 or 65. Instead, he ended an 11-year Major drought doing what Woods has done best throughout a 108-worldwide victory career and that is to mentally intimidate his rivals as Francesco Molinari can attest in taking double-bogeys at 12 and 15.

“I don’t know if we can truly know the physical side of Tiger undergoing four back operations and also know how much pain he may still be in, and he talked of having to get-up four hours before his tee-time just to get himself warmed-up,” said Harrington.

“It’s why I don’t think Tiger can sustain during regular weeks and I don’t think he’s going to be interested in regular tournaments as I think he’ll go back to being the 43-year old who wants to be liked and be comfortable with people, and wants to enjoy playing golf with his peers.

“But this does prove that every time he turns-up for a Major, the will is there and he can be back to being somewhat like the old Tiger and have a bit of bite and like he did with Frankie Molinari and that is to intimidate him off the golf course.

“The only way ahead for Tiger is peaking for the Majors as he’s done everything in the game of golf bar win his 15th Major and now that he’s done that, the only thought in his mind going forward now is the Majors.

“So, what’s the probability of him winning 18, 19 Majors as he’s definitely shown this past week that when he gets himself in ‘that’ place, he became a different player on that back nine.

“He was a different player all week but on that final nine we saw that he just wanted to get the job done, and if he needed to make ‘4’ up the last, he would have made ‘4’.

Woods is likely to now take a month off from competition before teeing-up in the May 16th starting PGA Championship where he’ll have the opportunity to capture a 16th Major Championship.

Who now will be foolish to bet against that taking place?