McIlroy books Tiger showdown with revenge on his mind 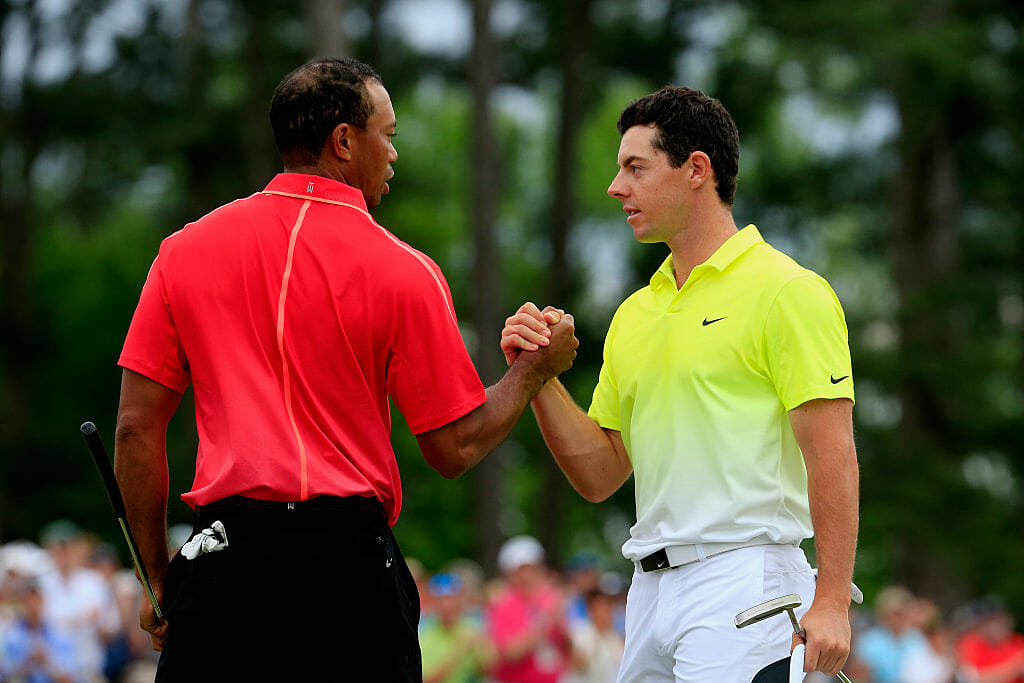 Rory McIlroy is out to exact revenge when he and Tiger Woods go head-to-head in Saturday’s last-16 showdown at the WGC – Dell Technologies in Austin, Texas.

The global golfing world is set to come to a standstill as heir apparent takes on the 14-time Majors winning Woods soon after dawn (US local time) in the Texas capital.

While McIlroy was humbled by Woods in capturing last September’s Tour Championship in Atlanta, it will be a first time in over five-years the Holywood golfing starlet and his blockbuster 14-Major winning rival will square-off in a true matchplay scenario.

McIlroy was never troubled when easily accounting for England’s Matthew Fitzpatrick 4&2 while Woods bravely fought back from being 2-down after eight holes to depose of compatriot, Patrick Cantlay 4&2.

It is the eighth occasion Woods has gone through to the last-16 having also gone on to win the event three times.McIlroy meanwhile won all three of his round robin matches, just as he did en route to victory in 2015, and was conceded his match against Fitzpatrick when the Englishman sent his drive into water left of the par-5 16th.

The World No. 4 ranked McIlroy had brushed-off, on the eve of the event, any talk of facing Woods for a place in the quarter-finals but there’s now no escaping their head-to-head confrontation.

“It is really exciting for the tournament and it’s exciting for both of us, I’m sure,” said McIlroy.“I am definitely excited so I am sure Tiger is, as well.

“I didn’t put up much of a fight in Atlanta last year at the Tour Championship, so hopefully I give him a better match tomorrow.”

The last time McIlroy and Woods actually went head-to-head in a matchplay event was in late 2013 in their ‘The Match at Mission Hills’ on the Chinese island of Haikou.

McIlroy won the stroke-play showdown with a 67 to Woods’ 68 and a year after, McIlroy also won the ‘Duel at Lake Jinsha’ also in China with the same scoring outcome.

“I was fortunate enough to have things go my way today and I needed two things to happen, and that was to win my match and for Aaron (Wise) to beat Sneds (Brandt Snedeker),” said Woods.

“That’s happened and I am very fortunate to move on and now face Rory in the morning. It’s going to be fun and I am sure both of us will be ready for it.”

McIlroy went into the last of the round robin matches needing a draw, at worst, to make the last 16. He did let Fitzpatrick off the hook after the Englishman’s poor drive off the first in missing a 13-footer birdie putt.

There was no lifeline for ‘Fitz’ at the next either after he sent his second straight drive way right, with McIlroy sinking a 10-footer to go 1up.

He handed Fitzpatrick the 10th hole when he was forced to chip-out from behind trees down the left of the fairway and walked off with a bogey ‘5’ after Fitzpatrick secured just his first birdie of the day to be back to 3-down.

To his credit, Fitzpatrick fought back to be 2-down with a birdie on 13 but no sooner McIlroy got back to 3up in holing a seven-footer for his sixth birdie of the day at the 14th. They each parred 15 before the inevitable outcome just short of the green on 16. In his three matches, McIlroy had not been taken past 16.

“I feel like pretty much all of this year my game has been close to what I would think is some of my best golf,” said McIlroy

.“I just feel comfortable with my game off the tee as good as I ever have. I have tidied-up my iron play since last year. I found something with the putter, so I am sort of going with it and it feels really good.

“I would not say I am peaking but I can sustain this level so yes, it’s been a great start to the year already.”