Home Latest News Tour News This is as good as it gets for McIlroy fans, says McGinley 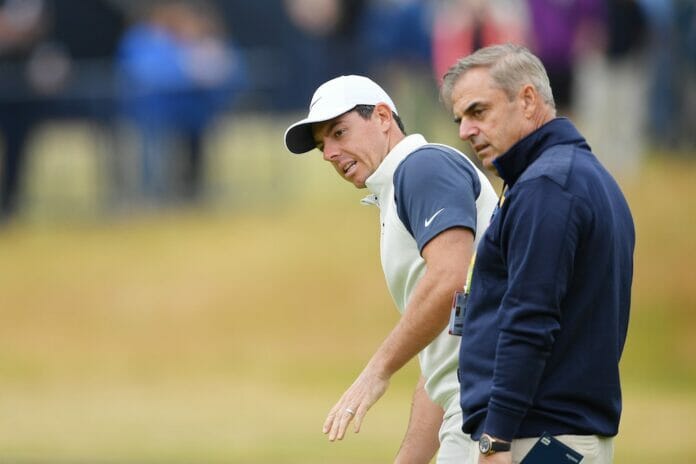 Paul McGinley was virtually jumping out of his seat trying to contain his excitement moments after Rory McIlroy brilliantly muscled his way into a share of the lead on day two of the Players Championship.

Once again, McIlroy has put himself into contention to end what is now a 53-week winless run following a spectacular second round 65 to draw level with Englishman Tommy Fleetwood on 12-under par at TPC Sawgrass.

McGinley has never been one to pull punches or admire McIlroy when so many of his fellow TV pundits continue to make a living ‘sitting on the fence’.Recently McGinley expressed his disappointment in learning McIlroy is skipping this year’s Dubai Duty Free Irish Open at Lahinch before last week stepping-in to defend the World No. 6 following the negativity of letting slip victory last Sunday at Bay Hill.

McGinley, in part, believed McIlroy is at his best ‘when he’s got a little bit of a chip on his shoulder’.Well, McIlroy was carrying no chip, no excess baggage and his shoulders were broad in sensationally soaring to a share of the Sawgrass lead thanks to a 16th hole eagle and a stunning ‘it was never going to miss’ birdie on the infamous island-green 17th.

“We have seen a lot of brilliance from McIlroy over the years but what we haven’t seen is a lot of consistency and in saying that, I have never seen him play as consistent as he’s playing now,” said McIlroy speaking on SKY Sports.

“You look right through his game and statistics back it up. His chipping, his bunker play. He’s made one bogey in two days. His driving is just sensational and all facets of his game are great.“We’ve seen the brilliance but we really haven’t seen this level of consistency that we have witnessed so far to the start of this week and that’s what’s brought him a new level.

“He looks incredibly comfortable and very, very confident and what is interesting, and aside from Tommy (Fleetwood), he’s created a bit a daylight from the chasing pack. So, he’s in a really, really strong position with the way he’s playing, the form he’s got coming in here.

“Rory is definitely the man to beat and I know Tommy Fleetwood is up there with him but certainly you would have to say McIlroy is the man to beat with this great form and this level of confidence he’s showing.”

McGinley singled out the eighth hole on day two when McIlroy seemingly miss hit his tee shot but got away with his ball landing just eight-feet from the flag before McIlroy kick-started a birdie hat-trick.

“It all started on the eighth hole as he mishit his long-iron shot but it still went to eight-feet and we said it in the commentary that there goes an inspirational player that when he gets going, he gets going,” said McGinley.

“The back nine was going to offer opportunities and he just kept taking them including that great second shot into the 16th.

“Rory is a momentum player. He’s a confidence player. He’s an inspirational player. We’ve always seen that and he is certainly on the crest of a wave at the moment in his career.

“He’s certainly trending … If you are a fan of Rory McIlroy this is as good as you are going to see him play right here.

“There just seems like there is no weaknesses in his game at the moment. Yes, he’s got some challenges ahead over the weekend and yes, he hasn’t won as many times as he should have done the last few years but certainly there is big changes going on in the career of Rory McIlroy and he looks strong at the moment.

“So, McIlroy is the guy to beat. Where he’s at. His run of form. His consistency and he’s got more consistency going on than Tommy. I am certainly not dismissing Tommy by any means and you wouldn’t. There is plenty of guys still in the rear-view mirror and still 36-holes to go and with changing weather coming-in.

“But at this moment in time McIlroy looks like the real form horse.”

And before signing-off, McGinley spoke of the impact Brad Faxon has had on McIlroy’s game, reflected in McIlroy recording 27 putts both on the first and second days at Sawgrass.

“Brad has been a huge, huge edition to his game and there is no coincidence he has gone to another level.

“He started working with Faxon last year, just before he won in Bay Hill, and he’s spent more time with him the last four or five months. Rory has gone to a completely different level than he showed at any stage last year and I have no doubt that Brad is having a big difference.

“Not just on his putting, as we have seen how good his putting his, but also on his mind because Brad is a disciple of Bob Rotella and Brad was one his first-ever clients.

“So, indirectly Rory is getting a lot of those ideas from Bob Rotella down through Brad Faxon into Rory.

“That is what is making him so relaxed and as I say, I believe if you are a fan of Rory McIlroy this is as good as I have seen, and I have watched his career very closely, and I haven’t seen this level of consistency from McIlroy.

“I’ve seen him win tournaments but not show this level of consistency.”