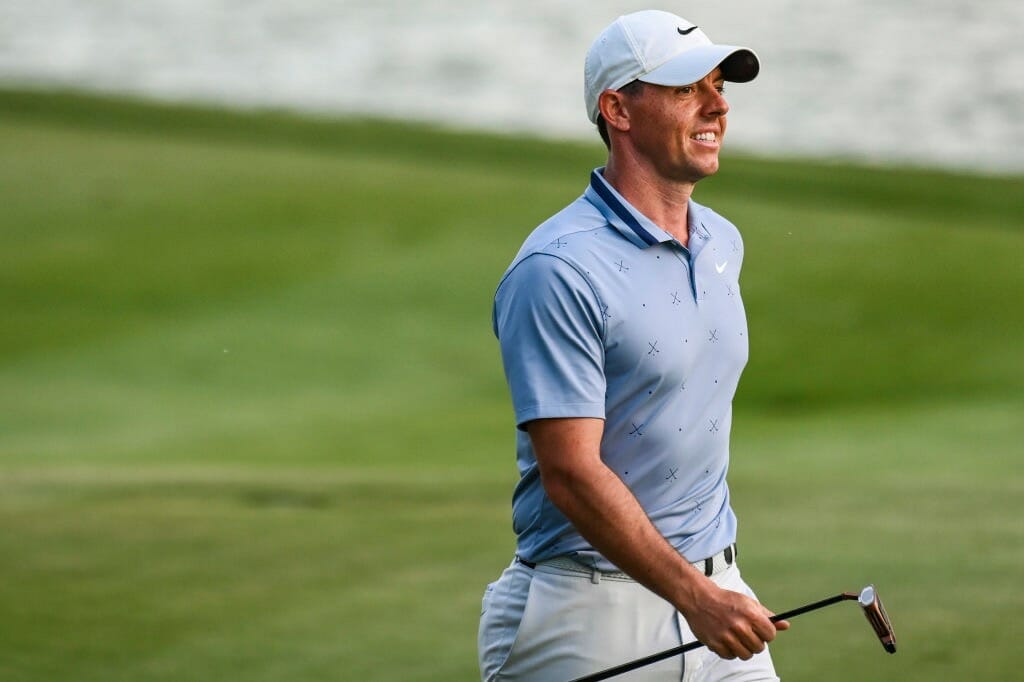 McIlroy came from three shots off the lead with three holes to play to finish eagle, birdie, par in a round of 65 to tie victorious Ryder Cup colleague, Tommy Fleetwood (67) in the lead at 12-under par on the TPC Sawgrass course.

“It was just another good day on the course,” said McIlroy. “I did everything pretty much the way I wanted to, and yeah, look, I’m really happy with the way everything is. My attitude has been great all year, and that’s the one thing I’ve been trying to focus on the most.

“The thing also is with the way the conditions are you really need to take advantage of the par-5s and for the most part I was able to do that today.

“Also, the course changed a lot from yesterday morning when we played to this afternoon, so I just have to concentrate on adapting and trying to figure out the way this golf course is playing, or is going to play over the next two days.”

McIlroy’s opening salvo is the first occasion in his last four events of five this new season that he’s posted two opening sub-70 scores as he also seeks to end what is now a 53-week winless drought.

Not that any are needed but if you’re looking for other positives, McIlroy recorded 27 putts for a second day running, with his second day effort including nine one-putts; clearly a continuing spin-off affect of working with Brad Faxon.

And after the ‘negativity’ surrounding McIlroy’s disappointing closing round last Sunday at Bay Hill, the player at the heart of the headlines continues to remain positive.

“You know, winning is a by-product of doing all the right things, and I feel like if I can continue to do those things well, hopefully I do end up with the trophy on Sunday, but there’s a lot of golf to play before that,” said the four-time Major winner.

And while McIlroy’s TaylorMade ‘Spider’ putter is finally delivering some bite he singled out a drill he’s been working on that is reaping rewards.

“Everything is matching-up and there are a couple of things I am still working on, as sometimes the club gets a little a bit too far inside, and inside my hands on the way back so I have been sort of doing a split-handed drill to keep the club on my toe-line halfway back and from there if I can get into that position I feel very comfortable and I can sort of do what I want with the ball,” he said.

“The thing is also the Spider putter is helping me to aim better. I’ve been putting the work in and I do feel that when I do aim the putter better it does free me up more so that I can concentrate more on making a good stroke.”

After bogeying his opening hole on day two, McIlroy played holes two to 17 in six-under par and in looking back over his round, McIlroy was only in real trouble once and that was his very first shot of his round when he sent his drive way right before landing his second at the back of the green, he took three shots to get down for a bogey ‘5’.McIlroy again missed the fairway right at the par-5 second but brilliantly landed his third to just two-feet to be back to level for the round.

He pared the next five holes till he landed his tee shot at the par-3 eighth hole to 10-feet for a second birdie while a third followed at the par-5 ninth in holing a 3-footer after his second shot finished just off the green and pin-high.

McIlroy then raced to three-under for his round and eight-under for the day when he captured his birdie in succession in brilliantly putting his 142-yard second shot to just three-feet. He split the fairway at the par-4 12th and after landing his second some 25-feet behind the flag McIlroy rolled-in a fifth birdie a fourth in five holes.

We then witnessed the highlight of McIlroy’s round at the par-5 16th when his second shot came to rest just nine feet from the flag and he then very calmly holed the eagle putt to move to six-under for the round and up into second place, one behind Fleetwood at the time.

McIlroy brilliantly kept the momentum going in a 21-foot birdie gem that did not look like missing the target and to finish his round, McIlroy was well right again off the tee but played a delightful 121-yard second shot to 17-feet pin-high ahead of two-putting for his 65.

“I don’t need a win. I’m not putting myself under pressure to win again, winning is a by-product of doing all the things that I’m doing well.”

“If you look at my driving stats, how I’m hitting my irons, all that adds up to hopefully shooting the best score or the lowest score of the week. So, that’s how I need to approach it. If I just focus on winning, what goes into that? Yes, that’s the end goal, but there’re so many different little mini-goals you need to accomplish to get to that point.”