Dogged Moynihan secures a share of 12th at Oman Open 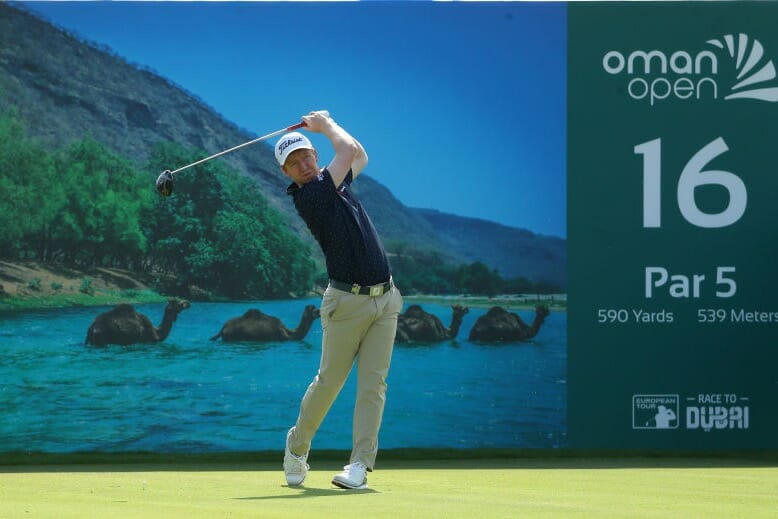 A dogged final round performance from Gavin Moynihan gave him a one-over par closing round of 73 to help him claim a share of 12th spot at the Oman Open.

The Mount Juliet touring professional ground out scores better than most during a week of wild weather in Muscat and managed two birdies and three bogeys in a solid final effort, giving great value to his new sponsor CarsIreland.ie in their first week of partnership.

The Dubliner can go home happy with a cheque worth €23,293 in his back pocket with Moynihan settling in well to life on tour after a rough rookie year last term.

Meanwhile Paul Dunne signed off with a 73 of his own to claim a share of 58th place on seven-over par after struggling to get to grips with Al Mouj golf club on debut this week.

The opposite was true for Kurt Kitayama, however, who produced a remarkable comeback to win his second European Tour title of the season in Oman.

The American was a single shot off the lead after 36-holes of the weather delayed event but started his third round with a quadruple bogey eight and dropped further shots on the second and third before darkness ended proceedings on day three.

That left him seven shots off the lead heading into a marathon Sunday of 33 holes but he made six birdies and an eagle to sign for a 71 and keep his hopes alive heading into round four.

He was still two shots back with three holes to play on an attritional final day but birdies on the 16th and 17th saw him sign for a 70 and get to seven under, a shot clear of Spaniard Jorge Campillo, German Maximilian Kieffer, Frenchman Clément Sordet and Paraguay’s Fabrizio Zanotti.

Kitayama came through all three stages of the Qualifying School to earn his rookie season and now has two wins in just 11 European Tour starts after his victory at the Afrasia Bank Mauritius Open at Anahita.

The 26-year-old held the first round lead in Muscat and on day two made one of the pars of the season by getting up and down on the third after high winds blew his ball off the green and into a bunker.

“This one feels really good because when I won the first one I was playing really well and it just felt like it was coming,” he said. “This week I came in off three missed cuts and not having good weekends in Abu Dhabi and Dubai. It feels great to grind through all of that.

“The way we started that third round, I was like, ‘can we stop right now?’. It gave me a refresh and it was incredible coming back.”
Despite his remarkable third round comeback, Kitayama was still three shots off Zanotti’s lead heading into the final 18 holes but he soon set about reducing that deficit.

A huge drive at the second left him a flick in to the green and a long putt at the third brought a second birdie of the day. He was in a five-way tie for the lead after five holes but bogeys on the seventh and 11th dropped him back.

Dane Joachim B. Hansen bogeyed the second but picked up shots on the third, fifth and sixth to hold the solo lead, a one shot advantage he still held at the turn despite a bogey on the eighth.

He dropped another shot on the 11th and Sordet – a winner here at the 2017 NBO Golf Classic Grand Final on the European Challenge Tour – assumed top spot as he put his tee shot on the par three 13th to eight feet to add to gains on the first and third.

Hansen got on the green at the par five 12th in two to rejoin the lead and playing partner Kieffer did the same after earlier bogeying the third and birdieing the tenth.

Zanotti was having a roller coaster round and he sandwiched a birdie on the fifth with double bogeys on the fourth and ninth to turn in 39.
Birdies on the 13th and 14th made it a four-way tie at the top but Hansen bogeyed the 14th, Sordet dropped a shot on the 16th and Zanotti four putted the 16th for a third double bogey of the day.

Kitayama produced a smart chip on the 16th to set up a birdie and get to six under but ahead on the 17th, Sordet holed a 30 foot putt to move to seven under alongside Kieffer.

A three putt on the last from Sordet handed Kieffer the solo lead again but the 28-year-old bogeyed the 17th after coming up short of the green.

An 18 foot putt from Kitayama then brought a second consecutive birdie and he parred the last to seal a victory that moved him to fourth in the Race to Dubai Rankings Presented by Rolex.

Zanotti birdied the 18th to move into a share of second, while Hansen dropped a shot to slip to five under alongside Swede Peter Hanson and Belgian Thomas Pieters.

Campillo was left to rue a nine on the par three fifth in round two as he made four birdies and a bogey in the closing round and looked set for a play-off before Kitayama’s big finish.

Hanson signed for a 73 and Pieters a 71 to sit a shot ahead of English pair Ashley Chesters and Chris Paisley, and Scotland’s Scott Jamieson, with ten countries represented in the top 11.