Darren Clarke finds himself just two shots off the lead as his renaissance on the Champions Tour gathers pace ahead of the final round of the Cologuard Classic in Tucson.

The Dungannon favourite has already claimed encouraging results in recent weeks with a top-10 finish at the Oasis Championship backed up by a share of 16th spot at the Chubb Classic, but he looks set on bettering both those this week in Arizona.
The former Open champion fired a bogey-free four-under par 68 to move within two of Mark O’Meara’s lead, with the highlight of his round undoubtedly a holed bunker shot for eagle at the par-5 12th.

Now at eight-under par, Clarke finds himself stalking the leader’s ahead of tonight’s finale and having only secured his playing rights until August on the Tour, he’ll be hoping that an early victory can rubber-stamp his spot inside the top-50 on the money list to extend his swansong with the seniors.
Former Masters champion, O’Meara shot a 3-under 70 in breezy conditions Saturday and will take some catching.
The 62-year-old O’Meara finished with a bogey on the par-4 18th to take a 10-under 136 total into the final round on Omni Tucson National’s Catalina Course. He also bogeyed No. 18 on Friday in a 66 when he matched the Tour record with eight straight birdies.
“The golf course is a lot more challenging today,” O’Meara said. “There’s still a few good scores out there. We got five par 5s, so those are kind of gettable, but the finishing holes were playing pretty tough. Certainly the last hole’s a tough hole, making bogey there.”
O’Meara won both of his senior titles in 2010. He won 16 times on the PGA TOUR, the last two in 1998 in the Masters and Open Championship.
“I got my work cut out for me,” O’Meara said. “I’m going to have to go out there tomorrow and shoot a really good score to be able to hopefully win.”

Kirk Triplett (69), Scott McCarron (70) and Willie Wood (71) were a stroke behind O’Meara.
“It was a tough day,” McCarron said. “The wind came up, about maybe about the sixth hole or something like that. Made it a little more difficult judging distance. I had a couple little shots I thought were pretty good that turned out not very good unfortunately with wind.”
First-round leader Kenny Perry had a double bogey on the par-5 17th in a 73 that dropped him into a tie for fifth at 8 under with defending champion Steve Stricker (72) and Clarke (68).
Woody Austin had a 75, ending his streak of rounds at par of better at 37 — one short of the record shared by Jay Haas and Colin Montgomerie. Austin was tied for 42nd at 1 under. 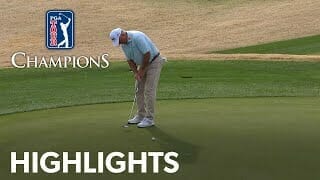