McIlroy has another near miss at Genesis Open

New World No. 8 Rory McIlroy has now recorded three top-5’s in his opening three events of a new-look, new-season start to his career.

McIlroy is cumulatively 40-under par for those three events which includes a T4th in the Sentry Tournament of Champions in Hawaii, a T5th in last fortnight’s Farmers Insurance Open and now a second T4th in the rain-affected Genesis Open.

After four days of very testing conditions along with very early wake-up calls for all in the field, organizers and tournament host, Tiger Woods applauded a new champion in J B Holmes.

Holmes took full advantage of compatriot Justin Thomas’ closing round downfall in letting slip a three-stroke leading cushion with a round to play, with the bearded Holmes winning by a shot courtesy of a one-under par 69 for a 14-under par total. Thomas effectively relinquished any real hope of winning at Riviera in doubling the par-4 13th and then bogeying the next in a four-over par 75.

McIlroy, who went into the week at World No.9, commenced his final round in brilliantly finding the right edge of the green at the par-5 first hole in two and then holed his putt for an eagle ‘3’.

He then birdied the par-4 seventh hole at the further-most point of the course ahead of a roller-coaster inward half that really put paid to the chance of first victory since last March in capturing the Arnold Palmer Invitational.

McIlroy bogeyed the short, downhill par-4 10th and then birdied 11th before dropping a shot at the par-3 14th where he missed the green right and then proceeded to take three shots to get down from just 33-feet.

He then moved into a share of second place at 12-under in superbly holing a 30-foot front right bunker shot at the par-3 16th to ignite hopes of possibly being involved in a play-off should Holmes stumble over his closing holes.

But it wasn’t to be as, with the wind increasing and temperatures dropping, McIlroy messed-up in missing a seven-foot putt for birdie at the par-5 17th.

He then came to last only to be caught-out with a second shot that pulled-up a handful of yards short of the green and he then went on to leave his chip shot 12-feet shy of the cup before holing out for a bogey ‘5’.

“It was not the finish I wanted and with those final few holes playing really tough,” he said. “Even the downwind 17 and 18th holes were tough.  I mean, the wind was gusting and you sort of think you’re hitting the right club and then it might lie down on you or gust on you.”

“After holing the bunker shot on 16, I took a peek at the board and saw that I was only two behind.  I hit a great drive on 17, I was in position to at least give them something to think about, so it would have been nice to convert that one on 17.”

“Eighteen was a weird one.  The hole funnels down there and I was trying to hit a hard wedge but it just came up short.”

“Looking back, I gave it my best.  It was a hard day.  There was a 4am wake-up call and then in place at 6.45am for the restart from my fourth hole, a 30-minute break for a bit of lunch and then into the final round.”

After not even hitting a shot on Thursday, McIlroy played 30-holes on Friday, 10 holes on Saturday and 32 holes on Sunday.

Looking back, it was not the last two holes that ‘cost’ McIlroy but the opening 18 when he struggled with the putter in posting 32 putts in a round of one-over par 72 and then brilliantly getting himself back into the event with a bogey-free second round 63.

McIlroy’s next event in Thursday’s starting WGC – Mexico Championship, his first appearance in the event since a T7th in the inaugural 2017 Mexico City tournament.

And while McIlroy revealed he will be taking his own food supplement to Mexico he was asked what he was looking forward to most while inside the ropes.

And as exclusively revealed by Irish Golfer Magazine McIlroy will be teeing-up in Mexico in his first European Tour money-counting event not as a member of the European Tour.

McIlroy indicated he has chosen not to re-join the Tour till May meaning he looks likely to contest the Tommy Fleetwood-hosted British Masters at Hillside in the first week of May.

Whether or not he tees-up in the July 4th starting Irish Open remains anyone’s guess. 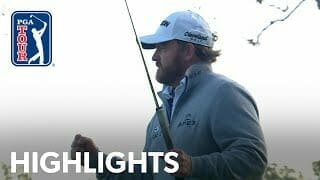