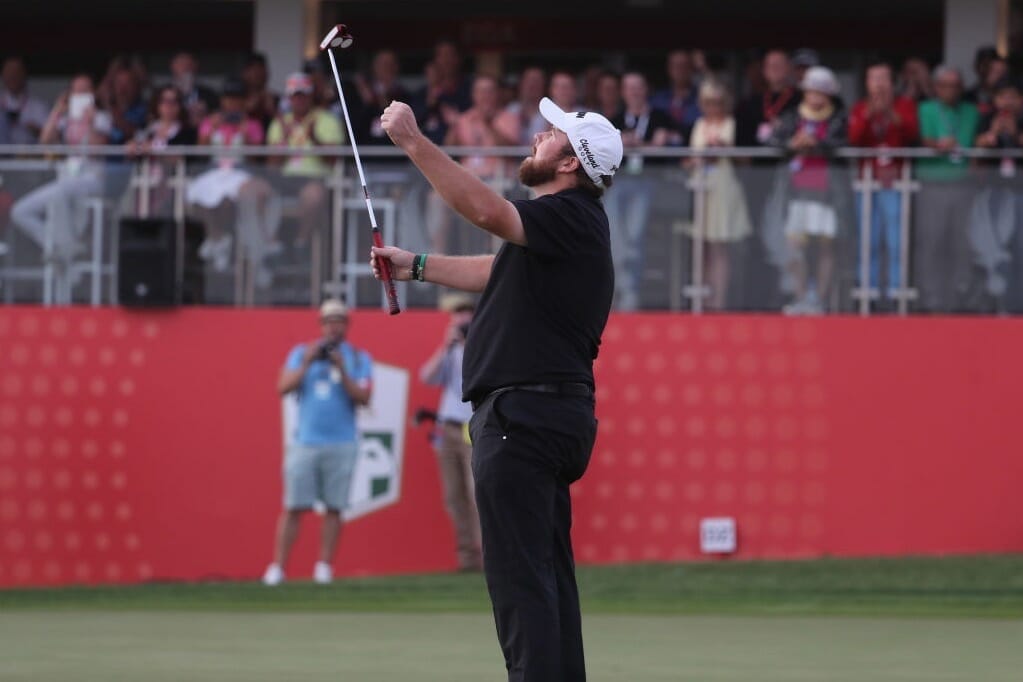 Shane Lowry returned home triumphant this morning looking to celebrate his Abu Dhabi success ahead of the joy of returning next week to the PGA Tour.

Lowry touched down in Dublin continuing to lead the Race to Dubai money list after storming his way to a share of 12th place in the Omega Desert Classic after posting a closing day 67 for a 14-under par total.

The Offaly golfer was a brilliant 11-under par in playing the closing three holes of the famed Emirates course over the four rounds, including birding the last each day.

In fact, after starting his final with a bogey and then doubling the sixth, Lowry played his closing 11 holes in eight under par thanks to birdies at seven, eight, 11, 13, 14 and his closing three.

“It was good week but then I got off to awful starts the last two days and managed to claw back something to give me decent rounds,” said Lowry.

“Today I just didn’t hit enough fairways and the greens are so firm that you can’t do well from out of the rough. But any time I gave myself an iron shot I hit it in close and made birdies. I could have been dangerous if I’d hit more fairways but I’ve squeezed another top 15.

“That’s some more Race to Dubai points and maybe a world ranking point or two, which would be nice.”

‘Golf Scientist Bryson DeChambeau captured his first ‘overseas’ victory posting a sizzling last day 64 and win by a record seven shots for a new tournament record of 24-under par.

“It’s incredible to get my first win overseas on the European Tour,” said the 25-year old American. “Today I was happy with my game. I executed a lot of great shots. It was obviously a lot of fun to be able to finally hoist an international trophy, I’m so happy about that. I was trying to shoot 25 under today and missed it by one, but I’m happy with the results for sure.”

Lowry had headed to the UAE earlier this month staring at some uncertainty after losing his prized PGA Tour card. But now in moving even further inside the top-50 on the World Rankings, and possibly up three spots to World No. 38, Lowry will be jetting off to L.A on Sunday ahead of some five PGA Tour events up to and including the April 11th starting Masters plus two to three more starts ahead of May’s PGA Championship.

“I was always going to the AT&T as I play with Gerry McManus in that every year and while I was supposed to go this week to Saudi Arabia and from Saudi to L. A., after winning last week I knocked that on the head,” said Lowry.

“So, I’m back home to see my family and friends and enjoy my Abu Dhabi win.

“After the week off my plans were to go to European Tour events in Oman, Qatar and Malaysia, but I’m now playing the WGC in Mexico, The Players, the WGC Match Play in Austin and hopefully a fortnight later heading to Augusta.”

What a change in fortunes for Lowry after the disappointment of last August in losing his Stateside Tour card and with the 31-year old also considering contesting the RBC Heritage Classic in the week after the Masters and then also hopefully hooking-up a week after the Heritage with Padraig Harington as team-mates in the April 25th starting Zurich Classic in New Orleans.

“I was always playing the Zurich Classic and hopefully I’m playing in that with Paddy this year,” said Lowry.

“I’ll maybe play the RBC the week after The Masters before heading to New Orleans and I’ve got the USPGA not long after that. So, that means I’m going to be back Stateside for a couple of months, though I might look at the British Masters.”

“I feel I played well at the back end of last year and feel that I just continued that coming out this year. I’m happy how my golf is at the minute.”

“I’m looking forward getting back home to enjoy the win last week and then getting to Pebble Beach and playing some more good golf”.