Lowry momentum continues on day one in Dubai 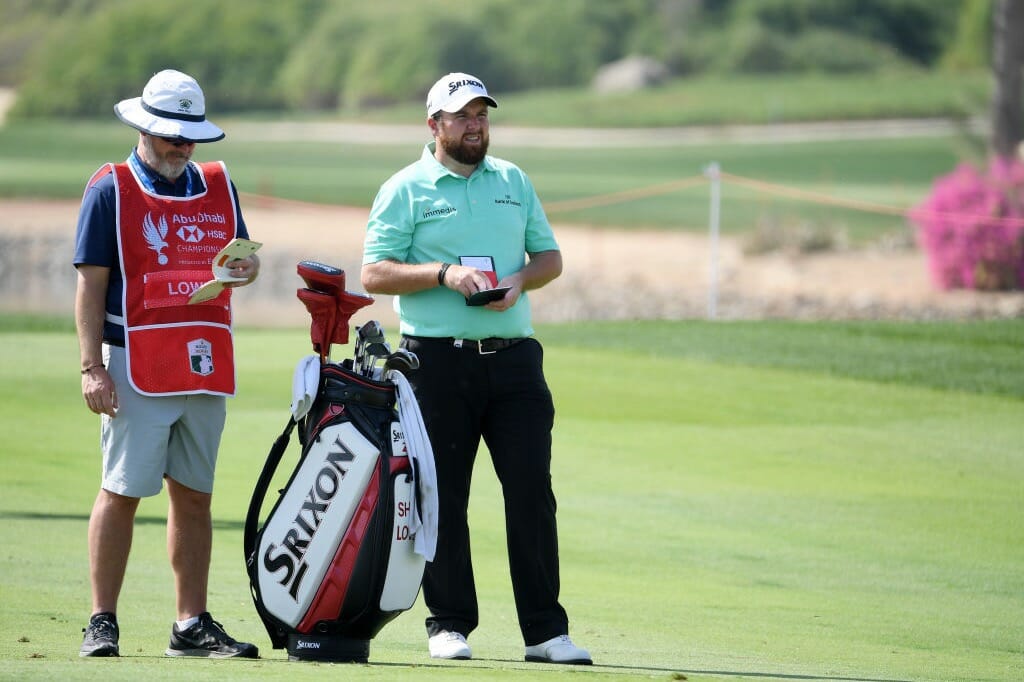 Fresh off his season altering win in Abu Dhabi, Shane Lowry showed no ill-effects from the celebrations as he posted a three-under-par 69 on day one of the Dubai Desert Classic.

Starting on the back-nine, the new World Number 41 picked up where he left off last week and raced to the turn in a bogey-free three-under 34 to make his way up the leaderboard.

The Clara favourite added another birdie at the par-5 3rd, his 12th, before enduring a little wobble on the way home with successive bogeys on 5 and 6 threatening to undo his earlier good work.

However such is the strength of his mental game after getting it over the line last week, Lowry brushed off the blemishes and signed off in style with a birdie at the last.

The leader of the Race to Dubai rankings finds himself in a share of 31stspot on three-under after a hot scoring day in the desert.
With four par-3s on the 7,328 yard track, the only surprise was that Lowry didn’t manage to find a 2 amongst them after he set a new European Tour record for the most 2s (11) over the four days in Abu Dhabi.

Still, it’s an accomplished start after some well-deserved celebrations over the past few days with the lovable Irishman breaking a near four-year duck with his nail-biting win over Richard Sterne in his first seasonal appearance last week.

He’ll have work to do to catch Matthew Fitzpatrick who finished with four straight birdies to open up a one-shot lead on the first day of the Classic.

Fitzpatrick made eight birdies – including six on the back nine – and a single bogey in trickier afternoon conditions on Thursday to sign for a 65, jumping out of the large group at six under par and into first place.

Sergio Garcia and Bryson DeChambeau were among those one shot behind Fitzpatrick after producing sparkling 66s in the morning, alongside Scott Hend, Matthieu Pavon, Thongchai Jaidee and Kalle Samooja, and later starters Callum Shinkwin and Romain Langasque.

Defending champion Haotong Li was another stroke further back on five under following a day of impressive scoring at Emirates Golf Club.

Yorkshireman Fitzpatrick reached the turn in 34 after following up birdies at the first and fourth with a bogey on the sixth.

But he bounced back in style, making two more birdies at the tenth and 13th before rolling in his 25-foot putt at the 15th.

The five-time European Tour winner then rattled in from 20 feet for another birdie at the 16th green before completing his first round with a pair of close-range birdie putts to make it four in a row and grab the outright lead.

Fitzpatrick, who last posted an opening round of 65 or lower at the 2015 British Masters supported by Sky Sports, which he went on to win, was happy with his performance.

He said: “It was obviously a great finish to the round. A couple of things that I’ve been doing in the off-season sort of looked to have paid off a little bit.

“I just added a bit of extra length to my driver, so it’s given me a few yards to help get on in two on the last because I’ve never been able to do that. And then, just wedging it a lot better has given me a few more chances coming in.

“So it’s nice to be able to get off to a good start and three more rounds like that would be nice.”

Starting at the par-five tenth, American DeChambeau tapped in from close range for a birdie at the earliest opportunity before adding another at the 13th.

He closed his front nine with back-to-back birdies at the 17th and 18th to reach the turn in 33.

After holing his birdie putt from around five feet at the second, DeChambeau expertly rolled in his tricky ten-foot effort at the eighth to get to six under.

DeChambeau was pleased with his score but felt his performance left room for improvement.

He said: “I didn’t feel like I was hitting it anywhere near my best.

“I was able to recover in a couple of situations, made a couple of long putts and then got up and down on six, which was huge.
“I even missed a couple of putts. I just felt like it was a scrappy round, but I got it out and shot 66 today, so I’m happy.”

DeChambeau’s playing partner Garcia also started brightly, picking up shots at the tenth and 16th before catching fire on the back nine.

The Spaniard made gains at the first, third and fourth before firing another birdie at the eighth.

“I got better as the round went on,” said Garcia.

“I started hitting the ball very nicely on the back nine, for sure. I hit some good shots on the front, don’t get me wrong, but I played really, really well on the back nine.”