Lowry’s 20-month journey to the shores of Lake Michigan 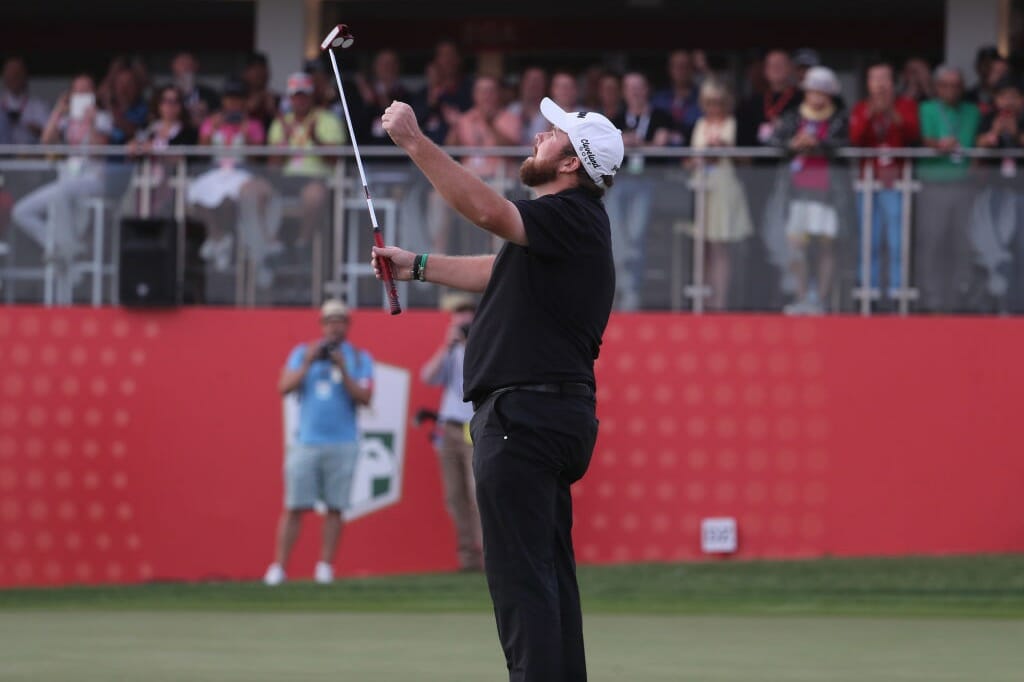 Shane Lowry’s start to a 20-month journey to the shoreline of Lake Michigan could not have been choreographed any brighter.

At the commencement of a 10th full season in the pro ranks, Lowry became the first Irishman in the events 14-year history to lift the gleaming Abu Dhabi HSBC Championship Falcon trophy and not only did he equal the course record, he set a new record for the number of ‘2s’ in four Tour rounds and also bravely buried any lingering 2016 US Open near-victory demons to win on a windy Abu Dhabi Saturday afternoon with a tap-in 72nd hole birdie.

And what Rory McIlroy has strived to achieve for 11 frustrating years, thanks to five seconds and three thirds in Abu Dhabi, Lowry did after an absence of five years, to end a more than three-year winless drought with victory in the UAE capital.

Lowry’s bitter disappointment and then uncertainty last August in losing his PGA Tour card has now been replaced with the raw emotion of a long overdue fourth European Tour win in front of his wife, young daughter, his parents and grandparents.

And while Lowry has worked his way back inside the top-50 on the World Rankings for a first time in two years, the Offaly golfer intends to do the reverse to McIlroy and commit himself to the European Tour.

Of course, Lowry will cross ‘The Pond’ to contest the three US-based Majors and the four WGCs and also accept the odd Stateside invitation here-and-there but for the time being Lowry is intent of undertaking what he had done earlier in this career.

That means getting back to competing more on the ‘regular’ European Tour that also places him in position to be closer to his family and rule-out countless return flights back-and-forward Stateside.

This, Lowry believes, is his best chance of finally breaking into a European Ryder Cup team and indeed becoming a member of the Harrington’s side he’ll take to Whistling Straits later next year.

“When you’re a decent player and you feel like you’re good enough to be there playing in a Ryder Cup team but you’re back home watching it on TV, there’s something deep down that makes you feel a little jealous,” Lowry said.

“The thing is I am not old, but then I am getting on. I turn 32 on April 2nd so I’ll be 33 when the next Ryder Cup comes around at the end of next year. So, I do need to start making a move.  Winning here in Abu Dhabi is just the move I was seeking.”

“I was in the selection mix for Darren’s side in ’16 and this past year I didn’t qualify for the Masters and then missed the cut in both the U.S. Open and The Open at Carnoustie so that hurt my France cause.”

“Now that I’m back in the world’s top-50 I have to make the most of doing well in the Majors and the WGCs as that’s the goal I have in my head as I set my sights on being in Padraig’s team.”

“That’s where I want to be and this win is a great stepping stone for that.”

And among the first to congratulate Lowry was Harrington who wasted little time tweeting his pleasure for Lowry saying:  “Brilliant by Shane, a win in the toughest possible way pillar to post.  Back where ne needs to be.”